A role for every volunteer

Arts organisations in Wales are becoming more imaginative with the types of volunteer opportunities they offer, from online volunteering to time-banking schemes, reveals Gareth Coles. 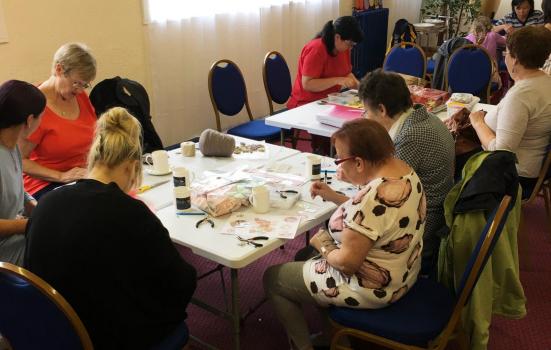 Volunteers help out at the Craft Club, Pontypridd

Arts and cultural volunteering is the second most attractive volunteering option in the UK after sport and exercise. Despite this, research conducted by Voluntary Arts England on behalf of the National Operatic and Dramatic Association revealed that the general public often doesn’t recognise that they can volunteer within the arts. The amateur arts sector also isn’t good at promoting opportunities or accessing support from the volunteering infrastructure.

The figures don’t indicate the breadth of volunteering roles and opportunities, from event volunteering to governance positions

The issue has received additional impetus in Wales in Light Springs through the Dark, the Welsh government’s vision for culture: “Looking ahead, we must promote the individual and community benefits of cultural volunteering, highlighting the ways that people from all walks of life can get involved.”

At Voluntary Arts Wales we have been exploring the role of volunteering in discussion with a number of volunteer centres. We are not aware of a systematic statistical overview of arts volunteering in Wales, but an initial analysis of the available information gives us a few clues to its extent.

The Wales Council for Voluntary Action estimates in its Third Sector Statistical Resource 2016 that there are about 938,000 volunteers in third-sector organisations in Wales. This leads them to estimate that 145 million hours of volunteering is given in a year, which can be given a monetary value of £1.7 billion, equivalent to 3.1% of Wales’ GDP.

Arts and cultural organisations make up a sizeable percentage of the Welsh third sector. Around 10% of the 33,000 third-sector organisations in Wales work in the area of arts, culture and heritage, and 22% of registered charities in Wales include the charitable purpose of promoting arts, culture, heritage and science. Figures from the Arts Council of Wales reveal that there were 1,353 volunteers within the 67 Arts Portfolio Wales organisations in 2015/16.

With an estimated 4,000 amateur arts, crafts and heritage groups in Wales, many of which are entirely voluntary, it seems that the scale and contribution of volunteers to arts organisations in Wales is considerable.

The figures don’t indicate the breadth of volunteering roles and opportunities, from event volunteering to governance positions. And there are emerging trends, such as online or micro-volunteering, which reveal the imaginative approaches that arts and heritage groups are exploring.

One large-scale example of crowd-sourced support and online volunteering was the Cynefin project, run by the National Library of Wales in Aberystwyth. The project, which concluded earlier this year, repaired and digitised around 1,200 tithe maps and transcribed over 30,000 pages of index documents.

Using a crowd-sourcing website, set up to allow anyone to contribute to the project by volunteering online, it created an online resource which could be freely accessed to research the tithe maps and their indexes in an efficient and innovative way.

Voluntary Arts has been involved in two iterations of a European-funded project called ‘Culture Guides’. Volunteers broker access to arts and culture for individuals and families who do not ordinarily take advantage of cultural opportunities in their area. One unforeseen, but extremely beneficial, offshoot of this work was the opportunity for a creative volunteer to partner with a creative service-user who has cerebral palsy in a disability charity. The volunteer supported and worked in partnership with the service-user on creative projects, and this dedicated one-to-one activity immediately yielded positive outcomes for both individuals.

More cultural venues are becoming part of time-banking schemes. The Sherman 5 initiative, in the Sherman Theatre in Cardiff, is designed to give people who have never attended a performance and face barriers/disadvantage the chance to do so. The project is enhanced by volunteers who support new audiences and get involved in activities before and after performances, earning time credits for their work.

Get the Chance, an online platform that aims to diversify and democratise critical responses to arts and culture, rewards contributors with time credits.

Members of time-banking schemes sometimes report that beyond the monetary value of the time credits, recognition is of utmost importance. Saying to someone that their time and contribution is valued and appreciated is the basis of a valuable volunteering relationship from which so much can grow.

A role for every volunteer