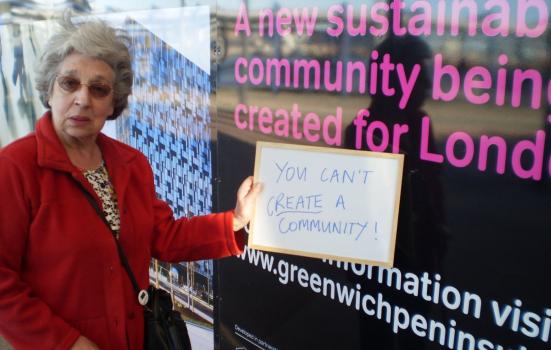 Ann Webb, a member of Critical Friends in Greenwich
Photo:

A number of articles in AP (A brave new town and Art on their doorstep) have announced the early success of the Creative People and Places (CPP) projects, initiated and funded by Arts Council England (ACE), from around the country. Directors describe their projects as brave, affording people living in disadvantaged areas permission to dream. Others say how they are inspiring people through art that is lifting hearts and minds. Surely the self-promotional premise by which project leaders are being encouraged to assert public participation in the arts is not helping anyone to understand the true value of culture in these contexts. On the contrary, there is building evidence that such hyperbole is actively undermining it.

As part of the Arts and Humanities Research Council’s examination into the value of culture last year, an expert workshop was commissioned that brought together artists, commissioners, researchers, education and arts practitioners from a range of community development contexts across the UK. At the Curating Community? workshop, chaired by Dr Alison Rooke, arts professionals critiqued presuppositions that participation in the arts has straightforward, positive social impact for participants and communities. Furthermore, the influence of class and ethnicity on attitudes towards what constitutes the arts, culture or creativity was identified as being particularly contested in areas with working-class histories and ‘superdiverse’ immigrant populations.

Growing numbers of community groups are choosing not to cooperate, observing how arts bodies frequently prioritise their own interests over theirs

An earlier report written by Loretta Lees for the EU similarly questions orthodoxies around the rhetoric around artist-led regeneration. Drawing on a detailed history of policy and practice over the last 20 years, she points to a “limited and problematic evidence base” and is similarly concerned by current-day acceptance of artist-led regeneration as a “quasi-social fact”.

It was a perceived lack of engagement in the arts that prompted the creation of CPP, a £37m nationwide scheme. Evolving out of precursors such as Renaissance in the Regions, it encouraged consortia of arts organisations to apply for funding from areas of the country that can point to particularly low arts engagement. During this time, wider political debate battled to fix blame for growing social inequality and two influential reports criticised the funding as being too London-weighted while ACE’s Chair, Peter Bazelgette, advanced his own admonishment of regional councils in respect of their cuts to the arts.

By way of innovation in response to the hard choices presented by austerity, CPP encourages “long-term collaborations between local communities and arts organisations, museums, libraries and other partners such as local authorities and the private sector. It aims to empower them to experiment with new and radically different approaches and to develop inspiring, sustainable arts programmes that will engage audiences in those communities”.

While there is indeed an urgent need for new and radical approaches, there is no consensus on what that requires, how they are recognised or what language is necessary to communicate them between professionals or, more crucially still, to wider publics. The Curating Community? report mentioned above validates instances of how common terms such as ‘community’ and ‘participation’ serve to hide conflicts of value and can sit in direct opposition, rather than harmony, across competing public and private interests. It gives evidence of how regeneration processes can cause conflict as much as community cohesion: “Local authorities, operating in a climate of fiscal austerity, are creating local conditions to attract hyper-mobile global private investment: selling or giving publicly owned land to developers… existing communities may be positioned as holding back transformation, either because democratic processes are too slow, or because of potential resistance.”

Rather than embracing arts initiatives, growing numbers of community groups are choosing not to cooperate, observing how arts bodies frequently prioritise their own interests over theirs. There is a recognition that developers can bring different values and unwelcome types of social change. The residents’ rejection of Art Angel’s site-specific commission by artist Mike Nelson on the Heygate estate in London is one notable example, along with another refusal more recently from resident groups to a proposal by Catherine Yass at Balfron Tower. Such rejections must be set against a groundswell of grassroots dissent, evidenced in the recent March for Homes last month, which defended public housing against the Government’s relaxation of rules for developers on providing affordable housing.

These examples illustrate the complex social contexts in which artists are left to negotiate their own practice, placing them in difficult, contradictory positions. One artist working on a CPP project acknowledged: “I wondered about the project aims and our ability to deliver on all of its terms. I had to face in a number of directions all at once.” ACE has engaged London’s 'Bridge' organisation A New Direction to evaluate CPP and highlight some of the issues raised through consortia working. This is encouraging to hear as, in the words of one stakeholder: “Everyone has heard there is money and wants to sit around the same table to get their hands on it. But no one holds the wider interest beyond their own.”

As ACE launches another round of CPP this spring, the public discourse needs to be less clichéd and more honest. Rather than taking a position of false optimism, it is surely a sign of confidence when difficulties can be acknowledged and shared. There is real value in the act of naming tension, despite pressures to positively self-advocate in order to renew funding. Otherwise, how can this field of research lead to any real learning?

Frances Williams is a freelance writer and curator.
criticalfriends.sophiehope.org.uk

You raise lots of interesting points points - many of which CPP programmes are very sensitive to and grappling with directly. Just to clarify, my organisation - A New Direction - is part of the Barking and Dagenham CPP and we have taken a lead role in managing the national evaluation of CPP on behalf of all the CPP places and ACE. We have support from a steering group drawn from CPP areas. We are not evaluating the programme ourselves. We will be getting some of the initial findings from the early stages of the evaluation online in the next few months and I know the CPP team is really keen to continue this debate about such an important set of issues, best

A joyful union?
Cohesion or conflict