Crowdfunding with a twist

Selling a new building’s fixtures, furnishings and finishing’s through the box office is a fundraising winner. Libby Penn explains how Lyric Hammersmith’s online capital campaign has been raising money and engaging audiences – one click at a time. 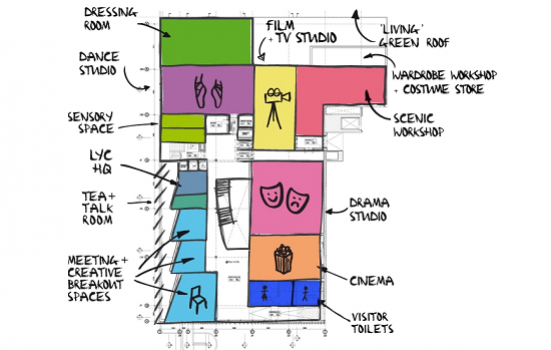 Website visitors browse a sketch of the building, choose a room, and decide what they would like to ‘purchase’

Fundraising in the arts has a special quality. Unlike in other sectors, the arts ‘product’ resonates on a deeply personal level, beyond the performance itself to the full spectrum of contact an audience member has with an organisation. An emotional bond can form between people and the venues where those unique experiences happen.

That’s the dynamic London’s Lyric Hammersmith tapped into when they designed their digital strategy for the theatre’s £16.5m capital campaign. After six years of planning and fundraising from government, trusts, foundations and then major donors, work began in 2012 to build a large extension to the west of the theatre and give the existing theatre building its first major facelift in 30 years. Even with conventional sources of funding secured, however, there was a £500k shortfall.

The development team wanted to come up with something that would acknowledge the smallest donor but also establish a connection with the individuals. Whilst other organisations were doing ‘Buy A Brick’ campaigns at the time, the theatre’s communications and development team “didn’t think that was very Lyric,” explained Lyndel Harrison, the theatre’s Head of Development. “So we held a creative session to come up with the idea of Buy an Item: ‘selling’ individual components of the new building.

“We thought it would be powerful to do something digital and encourage online engagement with our audience. Also the idea of trying to actually acknowledge each donor physically on every donated item in the building would be impossible, so we wanted to incorporate a way to acknowledge donors digitally on our website.”

Clearly on to a winner, the Lyric engaged their box office management system provider, Spektrix, to help deliver an interface and backend IT infrastructure that would enable them to ‘sell’ the new building’s bricks, fixtures, furnishings and finishing’s online.

Those who visit the capital campaign website can browse an architect’s sketch of the new building, choose a room, and prospective donors can then decide which component they would like to ‘purchase’. From mirrors and light switches to kettles and cameras, visitors have a range of options and donation levels to choose from, but with a physical, measurable outcome as a result of the gift.

“The campaign had a really strong concept and design to engage our audiences, but it was just as important to make the campaign customer-friendly to encourage people to take part,” said Harrison. “We used Spektrix’s merchandise feature so that people could donate by selecting an item of their choice, adding it to their shopping basket and completing a simple payment. It’s a user-friendly campaign that allows people to make a donation from £5 to £5,000 in a few easy clicks.”

The Buy an Item campaign has been successful both as a money-raiser and an awareness campaign about the building extension and the rationale behind it. Although it has raised a significant amount of cash, the Lyric marketers say that the most important impact of the campaign is that it has allowed people to “become involved with our new building before it opens”.

In doing so it has helped connect the development and communications team with those seeking to become involved with the venue, including new people and high net worth individuals.

“For example, we recently had somebody book tickets at the Lyric for the first time, who then spontaneously purchased £1,500 of Buy to Build items,” added Harrison. “The campaign allowed us to form a first connection with this person, who has since joined a fundraising committee and now has an ongoing relationship with the Lyric.”

The campaign’s success is supporting the Lyric’s community mission, which includes outreach to disadvantaged young people. A theatre-based programme helps them develop confidence and life skills, and by extending the building, the theatre hopes to increase these opportunities and help more people.

The new £16.5m building will change the landscape of Hammersmith by adding new drama, dance, film and TV recording studios, a 60-seat cinema, and a new bar and café. The capital project also aims to create one of the most sustainable cultural buildings in London with a Green Roof, almost 100% LED lighting and reclaimed furniture.

The theatre is preparing to re-open this Spring.

Libby Penn is Director at London-based Spektrix, whose mission is to help arts venues be more successful through better ticketing, marketing and fundraising.
www.spektrix.com
@Spektrix

This is the first in a series of articles, sponsored and contributed by Spektrix, aiming to provoke new thinking in how we use ticketing and CRM systems to maximise revenue and grow audiences.