A funding system that protects the status quo is preventing arts organisations from developing innovative new business models that are less dependent on the public purse, argues Michelle Wright. 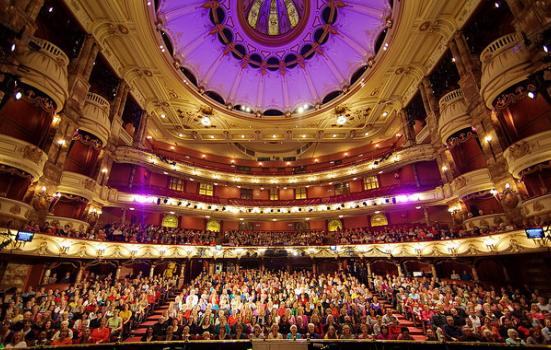 London Coliseum: "ENO has emerged as the true entrepreneur and creative thinker of the settlement"
Photo:

As the news of Arts Council England’s (ACE) investment package for 2015–18 settles in, and we breathe a sigh of relief that the news is not too bad, I’m left wondering, is it really a good thing that there were no real surprises?

Much of the media’s attention has been focused on English National Opera’s (ENO) 27% cut, citing the organisation as the “biggest loser”. But, for me, ENO has emerged as the true entrepreneur and creative thinker of the settlement. In my work for the Arts Fundraising and Philanthropy programme, looking at innovation in fundraising with arts organisations across the country, I’ve had plenty of time to reflect on what we really mean by enterprise in income generation and where this sits within our funding ecology. Knowing that ENO was facing a £5m annual cut, it has come out fighting with a new business model that achieves less reliance on the Arts Council by generating more commercial income. Good on ENO for innovating and seeking to protect its artistic integrity, rather than rolling over and accepting a cut that would result in decreased artistic activity.

When we think of innovation, invariably our attention turns to digital and some of the newer tools that might lead to different income streams, such as online giving, crowdfunding and the like. However, the reality is that whilst there is potential for arts organisations to increase revenue in a number of these areas, it is unlikely to lead to the six and seven figure sums that are needed to replace lost ACE or local authority funding. What instead seems to be the case is that those organisations that are successfully innovating in fundraising are prioritising three key areas:

My thoughts return to the role of our funders. Whilst they might nod vigorously when they hear word of a new business model or innovation, their behavior in subsequent grant-making often suggests they should be the last place to go with a bold or risky idea. If you look at this from the grant-maker’s point of view, it’s understandable: why would a funder make a high-risk grant that might flop, especially when public funds are at stake? It might be true that the grant manager loves innovation, but it seems to be an unspoken rule that 100% of grants must succeed. And the resulting funding decisions speak louder than words – what we saw in the latest funding round is effectively a protection of the status quo by a system that rewards the same old, same old.

Like ENO there are many arts organisations that know their business model might benefit from a radical overhaul, but my sense is that there is a fear that the funders won’t support such change or transition. What emerges is a paralysis, with the board, executives and key funders all ending up protecting the status quo.

Wouldn’t it be wonderful if ACE and other funders put out a ‘no-risk’ call to organisations wanting to explore radical new business models, where the best advice, funding and support (including from outside the establishment) could be given to those needing to change? Funding could be ring-fenced for establishing new ideas and taking a fresh look at place, partnerships and positioning to really make sure that our organisations are fit for the future. I can’t help but think that such transparent innovation from our main arts funders might lead to quite a different picture of grant funding for 2018–21...

Arts Fundraising & Philanthropy has just announced its programme of events for September 2014 to March 2015 including more than 50 one-day fundraising training courses and much more. Places are also still available for the National Summer School for Arts Fundraising and Leadership in Leeds from 31 August - 5 September 2014. Find out more at artsfundraising.org.uk.

Power to the people: how arts charities will have to change over the next 10 years
Wooing the young billionaires
The crisis in arts fundraising talent
Is it time to reimagine the trustee board bank?
We need to work harder on donor diversity
Are you sitting too comfortably?
Big vision
The elephant in the room – should trustees be obliged to give?
How to… develop a fundraising strategy
How bad is bad?