Bringing it all back home

Chris Bannerman tells how he reluctantly became a key driver in a complex collaboration involving choreographers, dancers and academics from the UK, China and Taiwan. 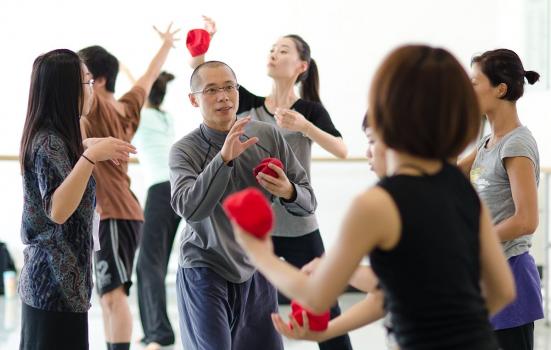 In July a group of nine choreographers, 31 performers and 25 academics from Beijing, Taipei and the UK gathered in London to create and present nine short works, alongside seminars and a conference repositioning performance as intercultural dialogue. The first thing to say is that we survived, and even enjoyed this experience, despite the complexity of the project, the large number of partners and stakeholders, and despite the thicket of bureaucracy that is an intrinsic part of international performance projects and universities in general.

The London edition was the fourth in a series that began in Beijing in 2009 and then moved to Taipei 2011 and back to Beijing in 2012. After playing the supportive role for so long, we were in the words of Bob Dylan “Bringing it all back home”, by hosting in London the three-week rehearsal period, the performances, the seminars and the conference. The partnerships were vital, alongside a story of accessing new audiences through the network of Chinese-language students and associated websites. However, a confession is in order, as I am one of those who heard innumerable times about the value and even requirement of partnerships in austerity Britain, but who shuddered over fears that differences in perspectives and priorities would inevitably lead to difficulties in communication, and then to paralysis. So how did an inveterate, possibly cynical loner become a key driver in a large, complex, collaborative project?

First, I learned to internalise the Chinese Confucian principle that arrangements needed to be ‘win-win’, so that all partners benefit as equitably as possible and achieve their goals. And I learned that personal relationships are vital for success and that mutual trust needed to be carefully cultivated. Interestingly, this focus on the relationship has stayed with me and I now value much more my professional relationships in the UK as well as internationally. When things go wrong, and they will go wrong at some point, it is personal trust which rescues the situation and the knowledge that your partners take your concerns seriously, as they too value the relationship. In China this required time and an extended choreography of meetings and meals that would not be required in London, or in the west in general. It often seemed painstakingly slow and that the goal of our partnership was receding even as we took one small step forward. But I have also learned that, while we do things more quickly initially in the UK, the Chinese, who may take a long time to commit, can move very quickly indeed and achieve remarkable things once they have committed. This realisation was a comfort to me when the theatre at the Beijing Dance Academy (BDA) was still being completed ten days before the performance in November last year.

In 2009 the excitement of being in China, and the optimism that seemed to infect everyone I met, also led me to raise my sights and to be more ambitious than I would have been otherwise. Others in the UK may not have suffered from this diminished ambition syndrome, but it had definitely curtailed my thinking so that my advice to others on beginning a new partnership would have been to work on something small and contained and to test the partnership in a setting removed from the glare of public performance. Instead in 2009 we did the opposite.

Somehow my Co-Director, Associate Professor XU Rui from the BDA, convinced me to bring together academics and artists from China, UK, Japan, Singapore, Hong Kong and Australia, and to perform the works created in Beijing’s 2,500-seat Poly Theatre with press and television coverage. In short, he taught me to raise my expectations of myself, and of what the partnership could achieve. The institutional support of both Middlesex University and the BDA was vital, but these large organisations would never have committed to the project without the total engagement of XU Rui and me. We had to raise the funds through our own efforts, but again this was made easier by the institutional framework which afforded a sense of solidity to our plans, despite the rather speculative nature of the proposals. The fact that this had never been done before became innovative in the institutional context, rather than foolishly risky, which it would have been if it had simply involved individuals. This led me to think about the individual artists and small arts organisations who are often cited as the engines of creativity in the UK, but who undoubtedly face specific challenges in making and developing international links and collaborations.

Following the success of the 2009 project, I had been infected with the excitement and optimism that I had experienced in China and so I proposed that our collaboration should be expanded to include Taipei National University of the Arts (TNUA) and that we continue to bridge gaps, not only between west and east but also across the Taiwan Strait. The last crisis involving the firing of missiles by China into the seas bordering the island of Taiwan was in 1996, some years past and relations were improving, but nonetheless this required a pause before the proposal was approved. The addition of a third partner was only a precursor to a range of new conversations and new partnerships sometimes offering financial support for aspects of the project, but often providing advice and expertise that were invaluable.

Among the new partners was Step Out Arts, an Arts Council England-funded agency, designed to support the work of British East Asian artists, and Jih-Wen YEH, the Artistic Director, was very helpful in starting negotiations with TNUA. I also felt the need to include other UK university colleagues, but I was anxious to ensure that the partnership with the arts profession would not be diluted with an overly academic, distanced view of performing and artmaking, or a lack of respect for artists. We are fortunate in the UK that an acceptance of artistic practice as research in universities has legitimised the presence and contributions of those experienced in the doing of artistic practice, the knowing how of artistic practice, not just knowing about it in an abstract sense.

In 2011 Martin Welton from Queen Mary, University of London became a key UK collaborator, later followed by Rebecca Loukes from Exeter University. Both know arts practice from personal experience and their contributions made an immediate impact. We submitted an International Research Networking application to the Arts and Humanities Research Council (AHRC) and were successful – once again the institutional support was vital, but only when coupled with the determination of the individual ‘champion’. The AHRC funding was followed by significant support from a family foundation focussed on providing international educational experiences and we were energised by the opportunities, especially as the UK was deep in the throes of economic difficulties which seemed endless. Projects in Taipei in 2011 and Beijing 2012 (avoiding the whirlpool of the London Olympics) gave us the experience and renewed enthusiasm for ArtsCross London 2013.

As the planning for London got underway we contacted the Confucius Institute (CI) at Goldsmiths College for additional support in communications with China. The CI initiative was started by China almost a decade ago and there are now over 300 of them. The CI is sometimes compared to the British Council with each institute developing a programme of language and cultural promotion. It is explicitly linked to government, which is not how we view the structure of the British Council, but interestingly in China the British Council is viewed as a wing of the UK government and is called the ‘Cultural and Education Section British Embassy’. However, the CI at Goldsmiths College is the only one focused on the performing arts and its Director Annie Guo understood immediately the nature and significance of the project and the need to communicate about it to the Chinese community both in China and the UK.

Finally, The Place, and Eddie Nixon, Director of Theatre and Artist Development, were critical to the London edition as they hosted the three-week creative period and the performance, allowing a professional arts venue to house and present experimental, intercultural work. This may sound simple, but three weeks of 40 artists, 25 academics and writers, 12 interpreters and administrative assistants is a serious undertaking, but The Place made us welcome throughout and assisted in many ways. The performance and the dress rehearsal attracted virtually capacity audiences (despite the August performance date) and the presence of the Chinese community, many of whom were students, was significant, demonstrating the effectiveness of the new networks we had accessed.

The future is uncertain, but we are all determined to carry on and develop the collaboration. In future I hope that we can increase the involvement of individual artists, small arts organisations and small and medium-sized employers (SMEs) in the arts. These ‘drivers of creativity’ are often nimble and innovative, but they may not have access to the networks that are critical to international developments. And international developments may be critical to the future of the arts in the UK. Our expertise is valued internationally and international engagement will both enrich our cultural offering and provide a basis for stronger support here in the UK. As a newly passionate advocate for partnerships and international exchange, I hope ArtsCross can contribute as a small part of an active and extensive network of partnerships and initiatives linking universities, conservatoires, artists and arts agencies, mobilising the UK’s cultural forces to ensure we are renewed and reinvigorated in the decades to come.

Chris Bannerman is Head of ResCen, the Centre for Research into Creation in the Performing Arts.
www.rescen.net

Bringing it all back home