Shadow minister: arts funding ‘should be conditional on ethical employment’

Justin Madders made the comments in relation to a tribunal hearing concerning the employment rights of art educators at the National Gallery, which could set a precedent for the public sector. 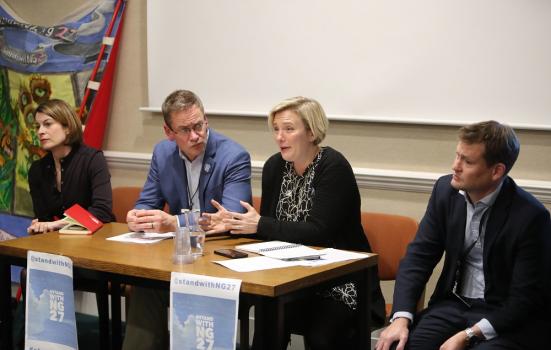 A Labour shadow minister has suggested that if his party was in government, it would push bodies who grant public money to the arts to make their funding conditional on ethical employment practices.

Justin Madders made the comments at a meeting of 27 art educators who argue they have been unfairly dismissed by the National Gallery, and whom the Labour leader Jeremy Corbyn said had been treated by the institution “as though they are chattels”.

The gallery says it has not dismissed the educators because they were self-employed, meaning it had the right to end their previous working arrangements, which in some cases had lasted for decades.

But the group, known as the NG27, say they should have the status of employees or workers because they were paid through the gallery’s payroll with tax deducted at source, and were required to attend training and appraisals.

The group were among 44 educators told in October last year that their existing roles would be cancelled, and invited to apply for 24 new contracts. 14 of these were permanent and are described by the group as offering “greatly reduced salary and terms”. Of the 22 members of the NG27 who applied for new roles at the gallery, only eight were offered permanent contracts.

The NG27 have compared their situation to recent ‘gig economy’ tribunals that have ruled against the private companies Uber and Pimlico Plumbers in comparable employment status disputes.

Justin Madders, the Labour party’s acting Shadow Minister for Labour, said that law in this area has “never been satisfactory” and that his party had the ambition of there being a “presumption of employment”.

Remarking that employment situations like that of the NG27 were widespread in the UK economy, he said: “I’d be interested to know whether this is something that will have implications across the whole of your sector, whether the model you have here is replicated elsewhere.

“I also think the conclusion probably is that there is a role for us to be pushing whoever is in charge of your funding to actually say a condition of the funding is that you employ people to what we consider an ethical and legal standard, and there isn’t this shortcut to self-employment and precarious employment that we have seen in recent years. Again, that is something that it would take a change of government to do.”

Madders continued: “We’ve actually got to go back and ask why the gallery embarked on this decision-making process. In effect, it’s a downgrading of people’s terms and conditions, whether you were employed or not. Were there cost pressures? Who has authorised that? I think I would also be interested to learn how they actually behaved during the tribunal process, whether they are threatening costs, for example. Whether they are putting delaying tactics in. Because all that is coming out of the public purse as well.”

The National Gallery operates as a non-departmental government body supported by grant-in-aid from DCMS, receiving 42% of its income (£24.1m) this way in 2017/18.

The Labour MP for Walthamstow, Stella Creasy, agreed that the arm’s-length governance arrangements of publicly-funded cultural organisations should not excuse them from ethical obligations, saying: “We spend our time hassling the Treasury to pay minimum wage to its cleaners, but non-departmental bodies…shouldn’t evade that scrutiny”.

Corbyn said the NG27 “should be recognised for what they are: good loyal workers, rather than treated in this way as though they are chattels that can just be moved out of the way at any time for the convenience of the gallery.”

The ten-day tribunal hearing began this week. The NG27, who worked for the gallery for periods of up to 40 years, are ideally seeking recognition as employees. Another possibility is for the tribunal to rule that they are ‘workers’, a status that would grant them more rights than freelancers, including minimum wage and holiday pay.

The case follows recent tribunals that have found against private companies in comparable situations. Last year a tribunal confirmed that Uber drivers should be considered workers rather than self-employed contractors, following an appeal from the company. And this year the Supreme Court upheld a ruling that Gary Smith, who had worked for Pimlico Plumbers for six years, was a worker rather than a self-employed contractor.

This year, the food delivery company Deliveroo also decided to pay out a six-figure sum to 50 of its riders who were making an employment rights claim against it, rather than take the case to a tribunal.

Speaking at a meeting in Westminster last week, Richard Stemp, one of the NG27, said the group worked on the gallery’s daily education programmes, including leading tours in the gallery and visiting schools and hospitals: “They employed us on a regular basis. We relied on them, they relied on us.”

He said that the group’s status had been under question for a while and they had been “starting to feel somewhat insecure” before being informed of the gallery’s decision in October last year, without any prior consultation. The new permanent contracts on offer amounted to “doing the same job but under worse terms and for less pay”, he said.

As well as ruling on the status of the NG27, the tribunal is considering more broadly whether those with ‘worker’ status have the right to collective consultation from their employer before a contract is terminated, in the same way that permanent employees do.

Currently, employees have the right to be consulted through a representative when 20 or more redundancies are planned.

Liberal Democrat peer Baroness Grender said that the hearing had wider relevance because it concerned how public money was spent. “The way you have all been treated has been pretty horrendous,” she said. “My guess is that this is because there’ll be other museums and other public sector bodies where this is happening”.

Madders said: “It is becoming more and more difficult to say definitively whether someone is in work or not. For us, it should be a straightforward test that anyone can understand. And the presumption should be employment, so we don’t have to keep going to court to get these basic rights enforced”.

“The Gallery has not dismissed anyone as part of this process. The majority of the people involved are still providing these services to us on the same basis as previously, whilst others involved in these claims have already accepted either employment or new contracts with us.

“It is our understanding that the claims have arisen out of the National Gallery's choice as an ethical employer to change from offering ad hoc work to offering more secure employment, with additional pension and worker benefits. This change also reflects our strategy to develop Gallery programmes to reach new audiences and to enhance our engagement with visitors.

“The entire group was consulted for their views about the change - both together and individually - for a period of three months between October 2017 and January 2018.”

The gallery added: “It is important to state that this case should not be likened to the ‘gig economy’ debate that has been in the news recently, with legal cases brought against Hermes, Uber and Deliveroo. In fact, the National Gallery situation is exactly the opposite. The ‘gig economy’ cases have arisen out of organisations’ opting to offer people ad hoc employment, zero hours contracts and no opportunity for job security. We have taken a deliberate choice to move towards a model that offers people secure employment, with additional pension and worker benefits.”