The initiative gives music fans the chance to buy shares in grassroots music venues and help secure their long-term future. 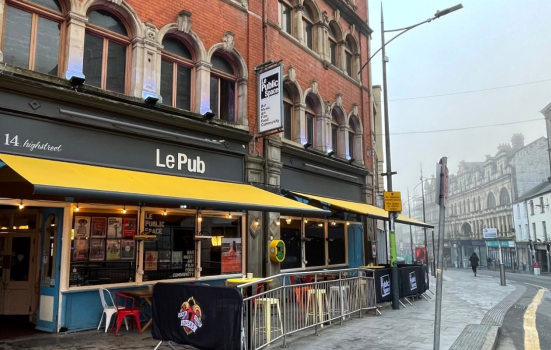 Le Pub in Newport is one of nine venues in the pilot
Photo:

The Music Venue Trust (MVT) has announced plans to purchase the freeholds of grassroots music venues across the UK in a bid to secure their long-term future.

With an aim of raising £3.5m to purchase nine venues before the end of the year as part of a pilot phase, the organisation has set up a community benefit society named Music Venue Properties.

Money will be raised through music fans and investors buying shares in MVP, on which they will recieve annual returns of 3%.

MVT Chief Executive Mark Davyd said the scheme is “the most ambitious initiative MVT has ever undertaken”.

“The long-term security and prosperity of grassroots music venues depends almost entirely on one thing – ownership. Too many have been at the mercy of some commercial landlords whose motivations revolve primarily around profit.”

The scheme, which has been likened to a National Trust for music venues aims to put a stop to the decline in grassroots venues across the UK.

More than 35% have closed in the last 20 years, with the majority of remaining venues facing ongoing challenges from gentrification, noise complaints, under-investment and poor economic outlooks that lead to an inability to plan for the future, MVT says.

Covid has exacerbated ongoing issues, with the music sector acquiring in excess of £90m of new debt through the pandemic. More than 90% of grassroots venues currently have less than 18 months left on their current tenancies, leading to a possible “decimation of our sector if we don’t do something about it,” Davyd adds.

“[Music Venue Properties] will allow ethical investors and music fans to invest in the future of live music while receiving a healthy return on their money,” Davyd said.

An online crowdfunding campaign for the scheme’s pilot met almost 10% of its target during its first week.

Nine venues are part of the pilot with six – Preston’s The Ferret, Atherton’s The Snug, Derby’s The Hairy Dog, Darwen’s Sunbird, Hull’s The Polar Bar and Bideford’s The Palladium – located in England.

Newport’s Le Pub and Swansea’s Bunkhouse represent Wales in the pilot and Glasgow’s The Glad Café is the lone Scottish venue included.

MVT hopes further venue freeholds will be identified and secured as and when they become available. All rental income received through the purchase of venues will be reinvested to develop the portfolio.

“We hope we can keep the momentum going and engage with the whole music community to make this radical change to ownership of the grassroots music venue sector,” Davyd added.

First launched in 2019, ACE has invested £4.5m through its National Lottery Project Grants since the fund’s inception, which is aimed at venues and promoters across England to “try new things and develop their businesses so they can be more sustainable and future proof”.

The ringfenced support will be welcomed by venues who were unable to receive, or retain, support from funding streams developed through Covid. According to MVT, 67% of Culture Recovery Fund grant aid given to grassroots venues was paid directly to landlords.

Davyd says the Supporting Grassroots Live Music fund is warmly welcomed as a “vital source of funding”, as venues face an ongoing recovery from the pandemic and a subsequent shortfall in ticket sales.

“This funding could make a huge difference in supporting the infrastructure that develops the next wave of artists in the UK.”