The Photographers’ Gallery says it will not curtail activity in the face of complaints from the pro-Brexit campaign group. 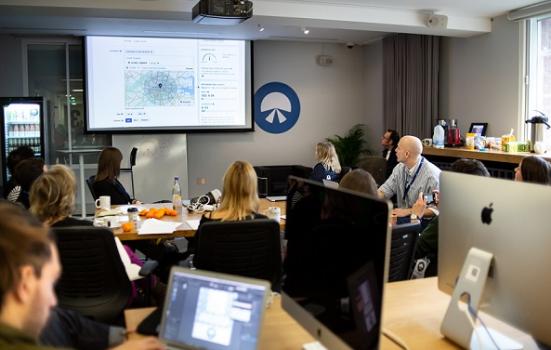 A pro-Brexit campaign group has lashed out at The Photographers’ Gallery (TPG) in London, calling for its charitable status and funding to be revoked for hosting an arts project aiming to ‘reverse Brexit’.

In a Twitter thread posted earlier this week, the Leave Means Leave (LML) campaign explained it had written to the Charity Commission to complain about the Gallery's “anti-Brexit political campaign”.

The tweets claim the four-day ‘Operation Earnest Voice’ (OEV) project – which the Gallery says has transformed its 3rd floor into “an influencing office tasked with reversing Brexit” – is political activity and in breach of the Gallery’s charity status.

“The exhibit description does not even mention the word ‘photograph’,” continue the tweets from the organisation, which is campaigning for a no-deal Brexit, and is backed by dozens of politicians from a range of parties. “Funding anti-Brexit propaganda from a registered charity using taxpayer money is wrong, possibly criminal”, the campaign says.

But the Gallery has stayed resolute, saying it will not curtail activities because the project is entirely within the bounds of Charity Commission rules and that LML’s complaints reflect a “misunderstanding of the artist’s work and the Gallery’s role as a visual arts organisation”.

The project, described as “part installation, part performance, part working think tank”, will run at TPG until the 13 January. It will explore the tools, methods and strategies used to influence public opinion online – such as those used by both the Leave and Remain campaigns ahead of the UK’s referendum on leaving the European Union.

A gallery spokesperson told AP the project is “first and foremost a performative installation”, and is part of a wider programme of events exploring the changing nature of photography in the Twenty-First century.

“As a project, OEV specifically aims to unpack and decode the structures behind the visual and literal language of online influencing, using the topical political issue of ‘Brexit’ as a catalyst,” they added.

LML’s complaint, outlined in a letter by its Vice Chair Richard Tice to the Charity Commission, is that OEV’s “blatantly political campaign” is “not allowed under charity law, and is in pursuit of something not included in the charity’s objects”.

“I fail to understand how ‘creating a campaign using tactics that manipulate public opinion’ and ‘new narratives to disrupt the current political debate’ advances photography as an art form,” he adds, urging the Charity Commission to remove The Photographers’ Gallery’s charitable status.

But Charity Commission guidance says campaigning and political activity can be “legitimate and valuable activities” for a charity – even permitting charities to focus most, or all, resources on political activity – providing such actions are undertaken to fulfil the charity’s charitable purposes and are not its sole activity. They are equally permitted to use emotive or controversial material as long as the methods are lawful and justifiable in the context of the campaign.

TPG explained its belief that, as its charitable purpose includes both advancing photography as an art form and responding “to the evolving nature of the medium”, the project is in support of its charitable purpose and conforms to Charity Commission regulations. The gallery spokesperson added that TPG had consulted with Arts Council England (ACE) and “taken legal advice to ensure that the project complies with all appropriate regulations especially with regard to publicly funded, charitable institutions”.

LML’s Twitter thread calls for ACE to withhold future funding to the Gallery (the venue will receive £900k per year from 2018-22 as one of ACE’s National Portfolio organisations). It singles out ACE’s London Chair, Ruth Mackenzie, for expressing “anti-Brexit views online” – which it illustrates with screenshots of her Twitter posts, including a retweet of a joke made by Labour Peer Andrew Adonis in 2012.

An ACE spokesperson stressed it is “not our role to censor the artists’ message” and that there are no specific requirements in its Terms and Conditions for National Portfolio Organisations regarding political activity or campaigning.

“We consider freedom of expression vitally important and we are fully supportive of arts organisations pushing boundaries and presenting challenging work,” they added.

The spokesperson told AP there were three relevant factors when determining whether to take action with an NPO: whether an organisation is in breach of its funding agreement with the Arts Council, whether it has clearly broken the law, and whether it is in breach of the regulations monitored and enforced by the Charity Commission.

In this instance, ACE said it would only determine “what action, if any” it needed to take if the gallery was found to have breached Charity Commission regulations.