Venues are pleading for leniency on isolation rules that threaten to derail their reopening, but audiences remain hesitant. 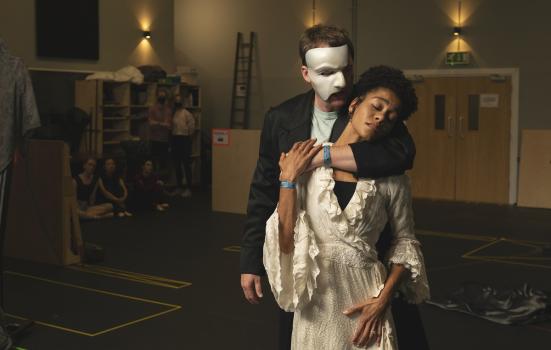 Killian Donnelly and Lucy St. Louis rehearse The Phantom of the Opera, due to open in February
Photo:

Arts organisations and their funders are urging caution and care as legal restrictions to protect against Covid-19 are lifted.

In a sudden change of policy, Boris Johnson announced Monday that large venues must ask attendees for proof of vaccination from the end of September, although anti-lockdown MPs have vowed to vote down new legislation.

It appears most English venues will keep other mitigations like masks and contact tracing but dispense with financially unsustainable capacity limits, although some larger commercial venues plan to reopen with a full house or increase their audiences over the coming weeks.

Steps towards a new normal are tentative and vary across the live arts sector. Hampstead Theatre, for example, is keeping social distancing for the time being; Courtyard Theatre in Herefordshire is dispensing with mandatory measures, but asking audiences to wear masks and test themselves before attending.

Ambassador Theatre Group said on Monday it would require proof of full vaccination or a negative lateral flow test, pre-empting the Government's announcement.

Funders, whilst not stipulating specific measures, say organisations must consider the public's safety.

Arts Council England "strongly support[s]" masks in enclosed spaces: "Although legal restrictions are being removed, organisations will still need to think about how to protect people from the virus."

Local authorities too are putting their foot down. Lancashire County Council says wearing a mask in crowded indoor spaces "is still the right thing to do", and council-funded organisations in Oxford will continue the practice.

"With a sizable number of staff, performers and volunteers, and indeed the public, not yet fully vaccinated we see this as an important step to protecting everyone involved in creating culture in Oxford," a partnership of 18 local venues said.

The Music Venue Trust is similarly urging audience responsibility. Its new campaign, #takeatest, asks gig-goers to take a lateral flow test ahead of the show.

CEO Mark Davyd said venues have different opinions about how to reopen safely, but that "there is a consensus about asking music fans to accept personal responsibility to keep themselves and others safe".

"This is a voluntary initiative that speaks to the sense of community across the grassroots live music sector. We are confident that live music fans will respond positively."

But productions remain at risk without insurance, and the self-isolation requirement for close contacts of Covid-19 cases is derailing 'Freedom Day' for some.

Kenneth Branagh Theatre Company and Fiery Angel were the latest to cancel as of Monday morning. Only four of seven cast members were able to perform its first run of The Browning Version, robbing them of two-thirds of their rehearsal time. "Some isolating, some actually unwell," a statement said.

Then Andrew Lloyd Webber called off the opening night for Cinderella, saying one cast member had tested positive.

Tests on Monday came back negative. "Despite this, the impossible conditions created by the blunt instrument that is the Government's isolation guidance means we cannot continue," he said.

Equity is calling for the Government to bring forward the August 16 date for removing the isolation requirement on people who test negative.

The current regime is "disproportionate and not tailored to the needs of the industry," General Secretary Paul Fleming said.

"As planned in England from August, a careful testing regime could and should replace the current blanket isolation approach in place across the UK.

"If it doesn’t, the vanguard of the UK’s social and economic recovery from Covid could face irreparable damage."

New polling highlights hesitation among audiences to return to live arts, with only a third saying they would be happy to go to the theatre.

The YouGov survey showed 48% of respondents were "uncomfortable" going to a theatre in the next few weeks. Half were not comfortable to attend a nightclub or party, and more than half support Covid certification or a negative test result as a condition of entry for large events.

55% said now is not the time to lift restrictions.

Another YouGov survey found 93% of Brits had not visited an art gallery or exhibition in the past three months even though they have been able to. In London, which has about 250 arts institutions, half of residents expressed health concerns around using public transport

Separate research by TRG arts shows demand for tickets is "weaker" than pre-Covid for 160 of the 226 arts organisations in its sample - most of these planned to use masks, hand santiser and other safety protocols.

However, the comeback for British arts is stronger than in the US and Canada, where 55% and 20% of arts organisations expect in-person performances by October.

83% of UK organisations have live shows lined up before September 1, TRG reports.

Chief Executive Jill Robinson said the full speed of the comeback will vary between the four nations. Northern Ireland has been the last to do so, announcing a socially distanced reopening for next week.

"Let’s hope that the likely return to full capacity performances in England on 19 July is truly irreversible," Robinson said.

"If so, we believe that organisations who invest in targeted marketing now will be able to draw good audiences this Christmas and into 2022."

Arts Council England (ACE) has said "a good opening is an inclusive reopening", pledging support to ensure that happens.

In a new blog commenting on the changes, the funder stressed the importance of considering disabled and clinically extremely vulnerable audiences and practitioners.

A recent survey showed just 7% of disabled artists are in full time employment, and that new barriers to access and participation in the sector are emerging.

One is a lack of trust that disabled artists' and audiences' needs will be met.

"So, I warmly welcome Arts Council England's considered approach to the lifting of restrictions which requires the arts sector to demonstrate inclusive values and to combat ableism."