'Lack of trust' in disabled audiences' access upon reopening

Just 7% of disabled arts professionals are in full-time employment according to a new survey that paints a "shockingly fragile" picture of disability in the cultural sector. 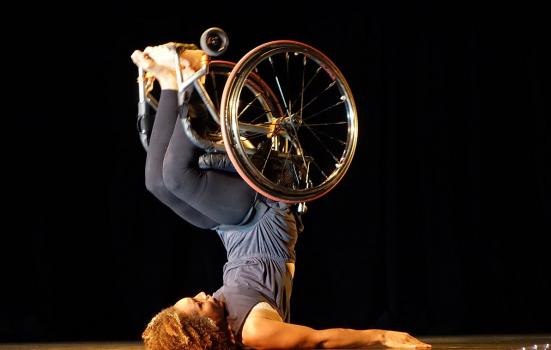 Alice Sheppard performs "So, I Will Wait."
Photo:

Disabled artists, organisations and audiences lack trust that access to culture will be provided as venues reopen.

This fear was expressed by more than 80% of respondents to an April survey by the UK Disability Arts Alliance, indicating the sector "needs to do more to reassure disabled audiences that access remains a top priority," the collective says.

The study illustrates the "shockingly fragile" state of disability arts, with more than half of disabled artists working less now than pre-pandemic and two-thirds concerned they will have to leave the creative industries due to a lack of work.

Although more than a quarter (27%) were working more than at the beginning of 2020, just 7% of respondents said they were in a full-time salaried position, 6% had been unable to find any work during the pandemic, and only 3% were earning the majority of their income through their artistic practice.

This is due in part to disabled people's underrepresentation in the arts pre-pandemic and other intersectional inequalities - about a third are on zero-hour contracts or have experienced homelessness, the survey found.

But new barriers are emerging. Potential vaccine passports and social distancing requirements that reduce the availability of accessible seating are contributing to concerns about access post-pandemic (82% of respondents) and health and safety (69%).

Former Disability Champion for Arts and Culture Andrew Miller said many disabled people have "lost confidence" to attend events: "Taken together, I am not surprised by our survey's results."

He said the Government's ban on clinically vulnerable people attending pilot events as well as some "very careless remarks" suggesting only the "fit and able" are welcome at live events have undermined many disabled people's trust.

The #WeShallNotBeRemoved campaign, now marking its first anniversary, created Seven Inclusive Principles for the sector last year, which has been adopted by many organisations including Arts Council England.

"The survey suggests they are not getting this right," Miller, a co-founder of the campaign, said.

One of the survey participants commented: "It's great the seven principles have had support but some of the signatories are among the worst offenders when it comes to disabled access."

'No support, no sector'

Consistent with figures on the wider arts sector, about half of respondents had not received financial support, with 16% saying they have struggled as a result.

"This... is probably an accurate estimate of deserving individuals who have been 'missed' so far," the survey found.

One in ten were unemployed freelancers, 15% had been furloughed and 20% had accessed the Self Employment Income Support Scheme (SEISS).

Alistair Gentry, who compiled the survey, said the precarity of these workers was worse than he had imagined.

"As an artist and freelancer myself, I knew that the vast majority of arts practitioners rely on other jobs, self employed jobs, sometimes multiple jobs to sustain themselves, although they're the lifeblood of arts and culture."

Even then, he says, he did not expect the figures arising from the survey to be so severe.

"Nobody can be productive or creative under conditions like that. No support and respect for freelance artists and arts workers, no arts sector. It's that simple."

Jo Verrent, Senior Producer at arts commissioning programme Unlimited, said: "We all knew the pandemic was impacting on disabled people in the arts sector heavily - now we can see just how weighty that blow has been."

"There is a brief window in which to act if we wish to stop the erasure of disabled people from the place it's taken over 30 years for us to gain in the cultural sector."

Emergency funding schemes and government income support was vital to preventing redundancies at 50% of disability arts organisations, the survey indicated.

Still, one in five have made people redundant or decided against taking on new staff and renewing contracts. That most had not made such changes demonstrated "the full value of arts council and other government support".

87% of organisations had received emergency funding from a UK arts council or trusts and foundations. More than half (58%) had used their reserves to survive the lockdowns, while 13% had none to spend.

59% expressed concerns about their finances. However, in a "somewhat surprising" finding, some organisations that did not gain financial support felt they had emerged unscathed thus far.

Vaccine passports were of particular concern to half of the organisations responding to the survey, with reduced audience capacity and "misplaced confidence over safety" also high on the list.

Miller said: "The impacts [of the pandemic] on disabled freelancers and disability arts organisations are significant, and will require additional targeted support from funders and a rebuilding of trust with the wider sector to ensure the UK remains a global leader in fully inclusive culture."