The Fundraising Regulator has backed charity Bow Arts Trust’s claims that the £90 a month 'donations’ it took from a tenant on a live-in artist studio scheme were made voluntarily, despite concluding there was no supporting documentary evidence and accepting that the payments formed part of the monthly rent. 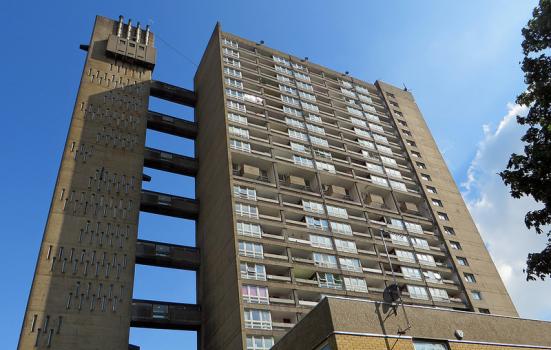 Artist Rab Harling was on a Live/Work scheme in Balfron Tower for two and a half years
Photo:

An artist has issued a formal complaint against the Fundraising Regulator for allegedly failing to properly investigate his accusations and reaching a “manifestly unreasonable” conclusion concerning the charity Bow Arts Trust (BAT).

Contemporary artist and film maker Rab Harling claims that Bow Arts took monthly rent from him and “processed a significant portion of the rent as a ‘charitable donation’” without his permission. He is asking for this money to be returned.

But following a nine-month investigation into his case the Fundraising Regulator has accepted Bow Arts’ account of events.

In his letter of complaint, Harling claims the Regulator has not “sufficiently and thoroughly” investigated his claim, and that the outcome of its investigation “does not represent the reality of the situation”. He told AP he was given no opportunity to hear or respond to BAT’s counter-claims until after the Regulator had issued a draft decision.

The Regulator is now reviewing all aspects of its handling of this case, something CEO Stephen Dunmore says is taking “a little longer than expected”. The Regulator intends to respond early next month, with “more details on our actions”.

Harling was accepted onto Bow Arts’ Live/Work scheme in 2011, when he rented a vacant flat in East London’s Balfron Tower, ahead of the tower block’s conversion into luxury flats. He believes that over £4,000 of his rental payments were processed as a voluntary donation across his two-and-a-half-year tenancy – something he says he only became aware of two years after moving in. He told the Regulator: “I do not support this ‘charity’, I have never given any permission for them to receive ‘donations’ from me.” Neither the Live/Work application pack, nor his tenancy agreement made any reference to a charitable donation.

Harling told AP that he first became aware he was donating money to the charity in 2013, when BAT listed a “charitable donation to Bow Arts” in his monthly payment schedule, alongside heating, water and service charges.

“At no point was I given the option to opt-out of the charitable donation,” he said – a statement that has been echoed by two other former tenants, who told AP that they hadn't been told of or agreed to any part of their rent being treated as a donation to Bow Arts.

On discovering that Bow Arts had been claiming donations of between £88.60 and £157.50 a month from him as part of his rent, Harling says he raised the matter with Bow Arts Trust CEO Marcel Baettig and received an eviction letter shortly afterwards.

BAT confirmed he was one of only two people whose Assured Shorthold Tenancy on the Live/Work scheme was not renewed at the time. The charity claims – contested by Harling – that it ended his tenancy in response to “complaints of his repeated bullying and harassment of other residents, in person and online”. They also say he subsequently vandalised his flat “including graffiti on an external wall burnt in with a blow torch”, which Harling denies was vandalism.

Before leaving, Harling wrote to Baettig asking for £4,200 – the total amount he claims was taken as a donation – to be returned. The charity acknowledged his invoice but, according to Harling, took no further action.

The relationship between the two continued to deteriorate, and in 2014 Harling was taken to court for threatening a member of Bow Arts’ staff on Twitter, for which he was given a conditional discharge and a £15 fine.

Then in July 2016 Harling wrote to the newly established Fundraising Regulator asking for help recovering his money, saying: “As the donation was not included in my tenancy agreement, and I never signed a document agreeing to the donation, I believe Bow Arts Trust exploited my lack of knowledge and my vulnerable circumstances. I think my donations must be returned.” He pointed out that, while living on the Live/Work scheme, his income was so low that he “couldn’t afford to eat outside of a soup kitchen”.

The Code of Fundraising Practice states that charities must not exploit the “lack of knowledge... or vulnerable circumstance of any donor at any point in time,” and must return donations in certain circumstances.

It is overseen by the Regulator, which holds the Code of Fundraising Practice for the UK and was established to “strengthen the system of charity regulation” and “restore public trust in fundraising”. Part of its role is to “adjudicate complaints from the public about fundraising practice, where these cannot be resolved by the charities themselves”.

Bow Arts has consistently and vigorously contested Harling’s claims, and after a nine-month investigation the Regulator has concluded there is no need for further action. This is in spite of the Regulator finding that Bow Arts had breached the Code of Fundraising Practice, and accepting that there was no documentary evidence that tenants were informed of the “donation element of the rent” at the start.

The Regulator concurs with Harling that the Live/Work scheme application pack failed to make it clear that a portion of the rent would be treated as “a donation and, therefore, can be refused”, but has accepted Bow Arts’ assertion that it had been “outlining all aspects” of the Live/Work scheme to applicants “in person”.

BAT claims that it verbally explains to all applicants how the Live/Work scheme operates throughout the application process, and that a senior member of staff met with Harling during a group viewing of their properties. This person, they say, explained that the Live/Work scheme was “available to artists who support Bow Arts’ charitable work”, who make a donation toward the charitable work of the Trust, through monthly rental payments.

Despite having made no attempt to discuss Harling’s version of events with him during the investigation, the Regulator accepted Bow Arts Trust’s account over his. In its Final Decision on the case, The Regulator says: “on the balance of probabilities, it is more likely than not that Bow Arts Trust informed Mr Harling of the donation element of the rent.” This is justified on the basis of the length of time the scheme has been operating, and the lack of concerns raised by other members of the scheme.

Summarising the findings of its investigation, the Regulator said it does “not think there is a need for us to make any specific recommendations for further action” as it is “satisfied” that Bow Arts has “put right the breach we have identified”. The Regulator noted that BAT has subsequently amended the Live/Work scheme application pack to include “a clear reference within the paperwork to the donation being made as part of the monthly rent,” although at the time of publication, there is still no evidence of this on BAT’s website.

AP asked the Regulator to clarify a series of points in relation to its Final Decision, including:

A spokesperson replied: “We don’t have any comment to make.”

AP has spoken to four other former tenants who lived on BAT’s Live/Work scheme. Whilst two said they knew from the start that part of their rent would be used for charitable purposes, the other two were surprised to hear of Bow Arts’ claim that they had knowingly been making ongoing voluntary donations that they could have refused to make, and were unaware that they could raise this issue with the Regulator and potentially reclaim their payments.

“The same for the [tenancy] licence. It was never mentioned either verbally or in writing.”

Fielden told AP: “What they [BAT] were saying suggested we knew about it all along. At the time I spoke to a few other neighbours and everyone I spoke to agreed that this was completely out of the blue.” He said that BAT had made numerous phone calls and knocked on his door asking him to agree to the donations retrospectively.

A spokesperson for the Regulator accused AP of being “unethical” for having contacted tenants for information and drawing their attention to the Code of Fundraising Practice.

As a registered charity, BAT is required to use all of its income for its charitable purposes and it is unclear why it might wish to treat part of the rent it collects as a donation. It appears that the only clear benefit would be to enable Gift Aid claims. Writing in ArtsProfessional in 2012, BAT said that the combination of rent donations and Gift Aid was raising more than £250,000 per year.

According to the charity’s accounts for the year ending 31 March 2015, Bow Arts Trust has received charitable donations from artists since 2000 and its Gift Aid claims were accepted and paid by HM Revenue & Customs (HMRC) up to the year ending 31 March 2013. But in 2014 HMRC initiated a challenge to the validity of these claims after a random spot check discovered that some donors who had signed a Gift Aid form had paid insufficient tax to cover Gift Aid. Over £60,000 was challenged for the periods ending 31 March 2014 and 2015, plus a further £133,000 “reclaimed and received in respect of an earlier period”.

BAT told AP that HMRC’s challenge had been concluded and it had not been asked to return any of the money, though the charity’s most recent accounts state that in the “absence of any closure confirmation from HMRC” a contingent liability relating to the years up to 2012/13 still exists.

In finding that “part of the monthly rent due from tenants was considered by Bow Arts Trust to be a donation to their wider work,” and that the Live/Work scheme is “available to artists who support Bow Arts’ charitable work”, the Regulator has drawn attention to a fundraising practice that could give HMRC cause for further investigation of BAT’s Gift Aid claims.

HMRC told AP that, for donations to qualify for Gift Aid payments, they must be “freely given without obligation, the donor must make a valid Gift Aid declaration and the payment must not be in return for goods or services (beyond certain statutory limits)”. The Institute of Fundraising explains: “If a donor receives a significant benefit as a result of giving money to your charity, HMRC no longer sees this gift as a voluntary donation, so it would not be eligible for Gift Aid.”

Given the benefit rule, it is unclear how Bow Arts is able to justify its Gift Aid claims, as tenants receive the benefit of studio accommodation. Were HMRC to find that claiming Gift Aid on the “donation element” of Bow Arts’ rental income breached its benefit rule, Bow Arts could be asked to refund the money with interest and possibly penalties.

In its 2012/13 Annual Report, BAT said that its Gift Aid claims are made via an “HMRC approved scheme”, which according to a BAT spokesperson was “set up with advice and support from HMRC at the time”. But HMRC told AP that Bow Arts’ use of the term ‘scheme’ was “completely incorrect”. This description “suggests some special arrangement, which is just plain wrong”, a spokesperson told AP. “We don’t have special arrangements or schemes with any customer, we apply the laws as enacted by Parliament.”

They continued: “We don’t comment on identifiable cases but please be in no doubt, that we will completely rubbish any suggestion that the Gift Aid rules have changed or been expanded in any way, shape or form.”