Ambitions to increase the number of creators of colour have been raised amid improvements in the incidence and portrayal of Black, Asian and ethnic minority characters. 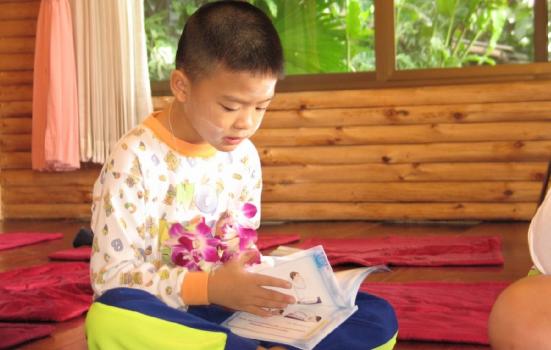 Depictions of Asian characters were lacking and relied on stereotypes, researchers found

The representation of characters and creators of colour in children's literature has reached a new high - but the work is far from over, industry experts say.

Research by the Centre for Literacy in Primary Education (CLPE) found 10% of the 6478 children's books published in the UK last year featured Black, Asian and other ethnic minority characters, compared to 7% a year earlier and 4% in 2017.

Separate research by BookTrust shows a small but significant increase in the number of creators of colour published, from 5.6% in 2017 to 8.7% last year.

BookTrust CEO Diana Gerald says this progress has prompted the organisation to increase its target of 10% ethnic authorship by 2022 to 13%, proportionate to the UK's ethnic make up.

"We owe this to the children who are at the heart of everything we do."

There is room for growth: white children's book authors produce twice as many books as creators of colour, who are then twice as likely to self-publish their work.

These disparities persist despite being a focal point of discussions in the industry over the past decade, according to Sheffield Hallam University researchers Catherine Harris and Bernadette Stiell.

Farrah Serroukh, CLPE Learning Programme Director and one of the report's authors, said there was a duty to counteract "hostility" through literature, "given the heightened risk of marginalisation that many of our pupils are facing in the current political landscape".

Books by Black British authors such as Bernadine Evaristo and Reni Eddo-Lodge have hit bestseller lists as the Black Lives Matter movement highlights the barriers people of colour face in post-colonial societies and encourage white communities to better educate themselves about them.

Candice Carty-Williams won the book of the year for her novel "Queenie" in June - the first Black or female author in the British Book Awards' 25-year history to do so.

Alongside the increase in representation, CLPE found ethnic minority secondary characters were "much better portrayed and developed", expressing agency and contributing meaningfully to the narrative.

"This was an increase from 2018 where this figure was 6%, an upward trend that resonates with our current social context in which discourses on identity seem more prevalent," the researchers wrote.

They emphasised the importance of this shift after previous research uncovered patterns like the 'Cover Short Change', in which characters of colour appear on a book cover but not in the story, and the 'Jasmine Default' for naming female characters - Jasmine is common across cultures without being culturally specific.

"As we have maintained throughout this work... presence alone is not sufficient and presence without regard to the quality of a character’s portrayal has the potential to be damaging and counter-productive."

CLPE researchers said they noticed a "conscious and concentrated effort" among publishers to ensure more representative content in 2019 than in previous years.

But the greater attention to detail and authenticity in illustrations "didn't always carry through into the detail of the text itself".

"The ability to portray consistently well-developed, solid characters from ethnic minority backgrounds who are not defined by their ethnicity without labouring the point, using lazy cues, or through contrived means continued to be a challenge," the researchers said.

They questioned whether the increase in illustrations rather than the literature itself reflected positive progress or merely a paltry effort to "paint over the cracks".

It may indicate "an early and necessary step of a longer, larger process that will lead towards more and better inclusivity in children’s books over time," they said.