Bridge organisations will initiate new partnerships that aim to help deliver a consistent cultural education to all children and young people. 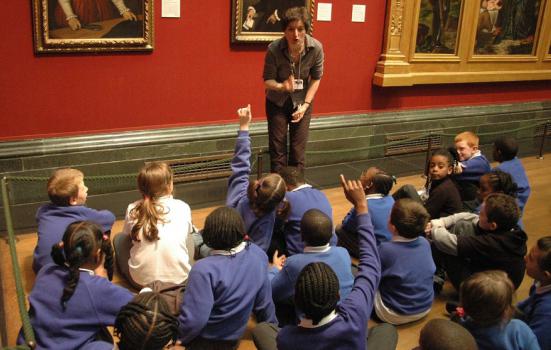 Arts Council England (ACE) is calling for sector leaders across the arts, education and local government to start sharing resources to ensure that a consistent cultural education can be delivered to all children and young people despite pressures on public funding. Its new initiative, The Cultural Education Challenge, will support 50 new partnerships across the country in areas most in need of arts and cultural provision.

The initiative follows a pilot scheme that saw cultural education partnerships established in Great Yarmouth, Bristol and Barking and Dagenham. The new partnerships will be initiated by ACE’s network of Bridge organisations, whose remit is to connect schools, children and young people with arts and cultural activity. They will lead the challenge in each area, although “strong convenors” will be encouraged to come forward to help deliver the Challenge at a local level. Over the coming weeks Bridge organisations across the country will be hosting workshops for local arts organisations, teachers, local authorities and others to learn about getting involved with the Challenge.

Schools Minister Nick Gibb MP is among those giving his backing to the initiative. Describing the Government’s view that arts are “a key part of a broad and balanced education for all young people,” he said: “…this was reflected in this year’s GCSE results, which showed an increase of 3.4% since 2010 in entries to art and design GCSEs.” He made no reference to the 13% fall in drama entries, the 6% fall in music and the 7.5% fall in expressive arts that schools have experienced since the introduction of the English Baccalaureate (EBacc) that year.

The announcement of the Cultural Education Challenge comes just a day after former Children’s Commissioner for England, Professor Maggie Atkinson, who is also Chair of London-based charity A New Direction, noted the dangers of “an accountability framework that only values EBacc subjects” and “government language that questions the value of arts based qualifications and relegates culture to a ‘nice to do’ hobby”. She said that failing to act will mean “we end up with arts and culture being self-selecting spaces where those already equipped to do well or pay for access are the main inhabitants of cultural and artistic spaces. And others are shut out.”

Atkinson’s comments were made in her keynote speech at a conference for London teachers, where a new campaign by London’s bridge organisation, A New Direction, was launched. The ‘Generation Culture’ campaign encourages schools to pledge to ‘do one more thing’ to develop the arts and culture, using a portion of their Pupil Premium funding, which is made available to them by Government to raise the attainment of disadvantaged pupils and close the gap between them and their peers.

She called for access to a cultural education to be recognised as a human right, as observed by Article 31 of the UN Convention on the Rights of the Child, and spoke of the urgent need to narrow the gap between those young people who have access to creative opportunities and cultural education, and those that don’t. “Part of our challenge to the cultural sector is that they need to get out of the middle and into outer London,” Atkinson said. “And part of our challenge to government is to get it to make far more noise about career and revenue generating opportunities via the creative industry as a place of work.”

A New Direction is pressing for every London school to become part of a local cultural education partnership. It will be brokering relationships between schools and partners to make this happen, prioritising outer London, where research shows that there are fewer cultural opportunities available to children and young people.

Under the last Labour government, something like £60 million was spent on the Creative Partnerships programme—the idea to create sustainable change to cultural education through a partnership approach. The impact of CP? The lessons learnt from that bold attempt to make Ken Robinson's words more than just a good bit of story-telling? Some of the final independent evaluations of the programme were never even published, let alone discussed and acted upon. And yet here we are again, with no reference at all to what has already been tried...and no reference at all to why it failed before, despite the investment. Just a slightly different name (and no doubt virtually no resources)...in Yorkshire the 'Bridge' organisation will even be the same organisation that was tasked with implementing Creative Partnerships. Ho hum.