The Executive Director of Live & Local recalls a career trajectory that has taken him through Butlins, an old bingo venue and many, many village halls. 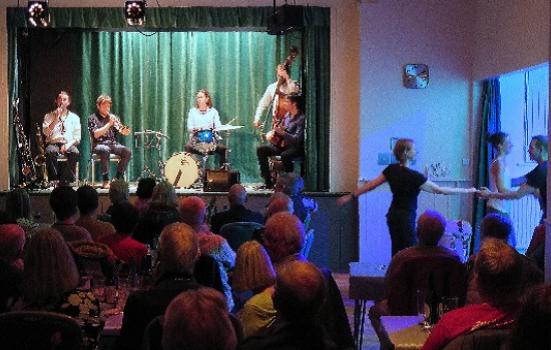 My career has been more of a climbing frame than a ladder, with unexpected scary ascents and occasional sideways swings. I certainly wouldn’t have anticipated becoming an Executive Director, Chair of a National Portfolio Organisation and an MBE.

After studying student drama more than geography at Reading University, I left in 1978 without a degree. However, thanks to a university colleague, I went straight into a temporary job as Technical Assistant at the Newcastle Gulbenkian Studio.

There followed a season as Stage Manager at the long-forgotten daily repertory theatre on the Butlins holiday camp at Filey, Yorkshire. Think of the chalet accommodation on the 1980s sitcom 'Hi-de-Hi!' – only I shared mine with a man with a bullet wound!

I then spent a year as Assistant Stage Manager at the De La Warr Pavilion at Bexhill-on-Sea, working with stars like Max Bygraves and Cilla Black and on an amazing assortment of amateur shows, professional wrestling and orchestras. My limited student skills were soon enhanced by the firm but fair hand of the stage manager.

Warwick Arts Centre was then opening its new concert hall, and my De La Warr experience was an ideal match for a Technical Assistant role. Over the five years from December 1980 I worked my way up to Acting Chief Electrician. I loved the variety, camaraderie and production values - but I wanted to be more involved in making the work rather than always ‘receiving’ shows.

A chance encounter in a Coventry pub led to a contract in 1984 as designer and Technical Manager for Tic Toc theatre company's expanding group of Edinburgh Fringe venues. Here I first witnessed their loud, in-your-face theatre (the final curry-and-beer-throwing scene in their show MEAT was literally in your face!). They were an entrepreneurial theatre cooperative with a post-punk attitude that made exciting work and had aspirations beyond touring theatre.

I joined their cooperative full time in 1985 for a roller coaster six years: we toured in an old Dodge truck. A colleague simulated a recurring headlight ‘failure’ to keep us awake. We won a Fringe First for ‘Hooligans’ and, in Coventry, ran one of the first regional alternative comedy clubs, promoting the likes of Harry Enfield, Jo Brand and Frank Skinner. We ended up owning and renovating an old bingo hall in the city that became the Tic Toc Club. It all went awry in 1992, the year after I left, leaving debts and a legacy akin to a family split. However, I gained some enduring friendships, amazing memories and the knowledge of how to and how not to run an organisation!

Coincidence and connections again played their part leading to a freelance job for Warwickshire County Council managing a showcase at Warwick Arts Centre. That led to co-ordinating their five-year-old rural and community touring scheme and I’ve been here ever since, in one guise or another.

Rural touring links professional expertise with the enthusiasm and local knowledge of the voluntary groups who choose the show, attract their local audience and run the event. I already had experience of managing people, money and time, so this role lent itself to my mix of technical, logistical and curatorial experience. In that first year there were 40 performances in 25 communities across one county. Now we support 450 live performances and 250 film screenings in partnership with 260 communities across eight counties, as well as an artist development initiative and one-off projects.
As the company grew in scale so did my management role and more slowly, my management skills!

Like any company, whether not-for-profit or commercial, it has been essential to grow and change; grasping new opportunities, sometimes with barely enough resources. The biggest challenge was doubling our scale in 2015 when we took over three more countywide schemes. It was easy to research the risks inherent in fast growth but harder to actually avoid all the pitfalls.

I am now privileged to be supported by a nine-person Board and team of 12 staff, which I’m pleased to say includes the recent addition of a Technical Manager. However, I still have a roll of gaffer tape in my office that I recently used to rig up the meeting room webcam. Once a technician…