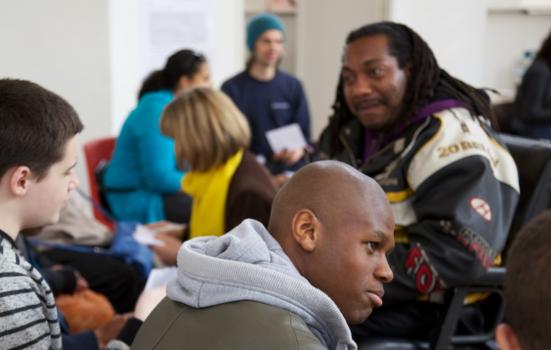 Access to careers in the cultural sector has always been a problem, from unpaid internships to requiring higher education qualifications for entry level work. CCSkills has championed fair access since our beginning, and it remains at the core of our mission today. Many employers have taken up the responsibilities of best practice, but is there an innate prejudice in the industry still? And has this been exacerbated by the Covid-19 pandemic?

Although class is not recognised as a protected characteristic under the 2010 Equality Act, it is clear someone with a disadvantaged background will face a far greater challenge in starting and progressing a career in the creative sector than those from a more privileged background. The Policy Review Series: Class in the Creative industries, published last year by the Creative Industries Policy and Evidence Centre, showed people with privileged backgrounds qualified to degree-level or above were 5.5 times more likely to secure a creative role than those of working class backgrounds.

The same paper revealed that 16% of those in creative occupations are from working class backgrounds, compared to 21% in any professional occupation and 29% across all occupations. More shockingly, the likelihood of someone from a working class background finding work in a creative occupation has remained largely unchanged since 2014 despite the sector’s exponential growth over the past decade. Despite growing to a value of £111bn a year to the UK economy, the rising tide of the creative sector has not carried everyone with it.

The reasons for this are all too familiar to us at CCSkills. Unpaid internships are still depressingly common in the industry – even now, we are reading about young people who cannot afford to work for free but believe it’s their only way to start their careers. Far too many positions require a degree whether this is relevant to the role or not. There is also the unconscious bias of organisations who are more inclined to hire ‘people like us’ than challenge their own perceptions.

All this was true when the industry was booming. One year on, with redundancies and recruitment freezes, as well as the outright end of many programmes and activities in the cultural sector, the odds of fair access for people from disadvantaged backgrounds seem diminished.

But there is action to be taken, and even opportunities to be had from this crisis. The Creative Kickstart programme – a direct response to the pandemic – has ringfenced up to £5m from the Department for Work and Pensions to support hundreds of young people into paid employment across the UK’s cultural sector. CCSkills and our partners would like this programme to help transform the way the sector thinks about recruitment. Creative Kickstart can demonstrate to employers the benefits of recruiting from a wider pool of talent, if they choose to do so.

Of course, the same could be said about the Apprenticeship Levy, which promised to address a similar gap in recruitment when it was introduced several years ago. Yet, Fulfilling Potential, published by the Social Mobility Commission last June, confirmed that the levy disproportionately benefits those from more advantaged socioeconomic backgrounds. This may have been an unintentional consequence of favouring higher-level apprenticeships, but the report also noted that apprentices from disadvantaged backgrounds may be perceived as more expensive to recruit and retain. The notion that they are riskier bets certainly sounds like prejudice.

If the issue can’t solely be addressed by funding, what else can be done? At CCSkills we offer training sessions on best practice recruitment to help change an organisation’s mindset around recruiting. From the simple things like ensuring application forms are accessible to all and don’t require irrelevant qualifications to embracing diverse ideas and ways of working, we can truly open the sector to people with different backgrounds, identities and circumstances.

The cultural sector does not have to transform into a paragon of equality overnight (although it might be nice if it did). But if ours is an industry that reflects and speaks to our society, it can’t continue to be one of the worst offenders for prejudice and lack of access. We need to get much better, much faster and take the opportunity to build back fairer from this pandemic.

Jane Ide is the CEO of Creative & Cultural Skills

I totally agree with this, but there is also prejudice against working-class older adults, all the things put in place by the government are for young adults. I am 49, have dyslexia, and raised a family while holding down several different jobs, running a mobile business and I'm from a working-class background. I was never able to get into the arts, at any point because of this even though I tried many times. so at 40 I put myself through uni got an art degree, and still, I find prejudice against me because yes I'm working class, but also because I am a mature woman. The arts seem to be the worst offended I have seen for prejudice on all levels. regards Nj Artist, Editor, Curator www.haus-a-rest.com