Why I bought a quilt

Andrew Pinnock says City of Culture planners should spend less time making up positive-sounding stories they think they can sell, and more time listening to the people who make culture on their own terms. 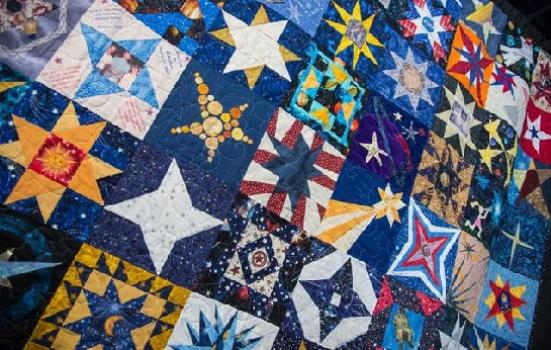 In June I bought a brightly patterned, king-size quilt over coffee at a City of Culture conference in Southampton – because it seemed to me that someone should.

The conference brought together all the city’s major cultural power brokers in order to develop plans for a 2025 UK City of Culture bid and build momentum behind it (1). Guest speakers shared their expertise and, in one case, inside knowledge of the judging process. It was a useful, enjoyable day: action-orientated and thought provoking.

Just a few representatives of small, unfunded community organisations had been invited to speak. Beverley Dowdell impressed me hugely. She chairs Southampton’s Black Heritage Association, a social club for elderly black Southamptonites, many of whom arrived in the city 40 to 50 years ago. They were not, as Beverley diplomatically put it, made to feel entirely welcome.

Now they are retired, inevitably getting frailer, and possibly living alone, they meet several times a week in the association’s converted corner shop premises to play dominoes, drink tea and chat. (I later learned that the association manages all this on about £2500 per year). In passing, Beverley mentioned a quilt that she and other members made a decade ago and had, for a long time, been hoping to sell to raise money. I wish I could say that one of the many Arts Council funded bodies in the room made her an offer there and then – that would have been a fabulous public gesture in-keeping with the spirit of the occasion – but it didn’t happen. When Beverley had finished, speakers re-focussed on the serious business of bidding for millions.

A community came together to make it; creating it made the community stronger; and locals’ contributions were gratefully incorporated.

Over coffee, I asked Beverley what she wanted for the quilt (not a lot) and committed to buying it. In the months that followed I tried to find a public gallery or collection open to housing the quilt and occasionally putting it on display. People liked the idea, but rules and budget constraints prevented them immediately saying yes (2). Was the quilt art? And were questions about its artistic status relevant anyway? In normal circumstances, Arts Council funding settles the matter; work produced in fulfilment of grant conditions qualifies automatically. But the quilt already existed: a grant to imbue it with the aura of art could not be applied for retrospectively. It is not old enough, nor will it interest heritage funders for several more decades, by which point the opportunity to honour surviving members of Southampton’s Windrush Generation would have slipped away. To me, this is the unresolved tension around City of Culture bids and around ambitious forward planning of all sorts. How can we make the most of time-limited opportunities while thinking ahead to imagine a future golden age?

In a separate conference session, we heard about financial pressures bearing down on Southampton’s independent music venues. Some have closed; others stay open thanks to the truly altruistic managers who are no longer paid for running them. Dan Mar-Molinero, a University of Southampton colleague, and Martin James from Southampton Solent University, laid out the facts and urged funders to act. But Dan and Martin were stuck in an artform timewarp.

Successful City of Culture bids, we learned, are not organised along artform lines, nor do they enter special pleas on behalf of ailing organisations. Cities in contention need to develop transformational stories about themselves that they can sell to the panel of judges. These heavily curated pieces of work must sound authentic, distinctive, and community-rooted: only people with experience of national-level fundraising can be trusted to write them. National Portfolio Organisations (NPOs) based in a hopeful City of Culture provide the armature around which other parts of the bid are wrapped. NPO staff speak the language of curation and command physical, financial and human resources that can be committed to the bid up front. And of course, it’s good policy to encourage greater community engagement with NPOs.

Dan and Martin told the inconvenient truth about music venue closures. They may be key players on the city’s music scene, but as doomsters and gloomsters they’re disqualified from involvement in any bid. Beverley talked about tea, dominoes, dignity, companionship and community self-help: she didn’t say “art” or “culture” once. In my view, City of Culture planners should spend less time making up positive-sounding stories they think they can sell and more time listening to the people who are making culture on their own terms, often against the odds and only rarely with the benefit of Arts Council funding. Black Heritage Southampton’s quilt is a brilliant metaphor for real, rather than artificially curated, culture. A community came together to make it; creating it made the community stronger; and locals’ contributions were gratefully incorporated.

Andrew Pinnock is a professor in the University of Southampton’s Faculty of Arts & Humanities, based in Music. He worked for Arts Council England between 1992 and 2004, a career phase to which his interest in cultural policy matters can be traced.

(1) The programme for the conference, designed by Southampton Solent University organisers, owed much of its inclusive vision to James Gough, the former Director of the Southampton Cultural Development Trust.

(2) I have to thank my colleagues in the University of Southampton’s John Hansard Gallery – an Arts Council NPO – who now have the quilt on long-term loan, and Southampton City Council for awarding Black Heritage Southampton a small grant in 2008 that paid for quilt-making tuition and some of the cost of the materials.