What ‘watch at home’ gave us

Can a regional theatre make money from online productions? Kelly Johnson says you have to weigh your options and ask for help. 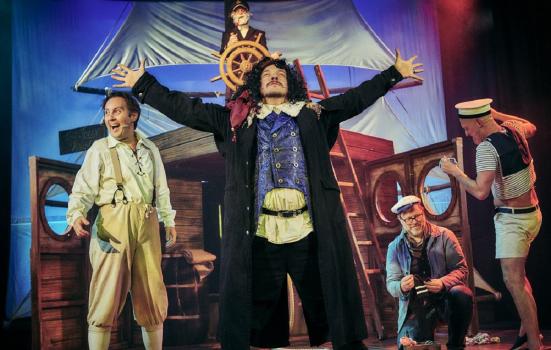 Like so many theatres we had to plan, adapt and sometimes change tack entirely as we responded to fluctuating circumstances. This meant always having a plan A, B and C up our sleeve. We were extremely lucky to present a live show at Exeter Northcott last Christmas. While our pantomime was put on hold, we were able to work with local theatre company Le Navet Bete to stage their take on Treasure Island for a socially distanced audience.

Our aim was to engage and entertain our audiences as well as supporting local theatre makers; we always knew a digital offer would be key to that. Fortunately, by the time the full lockdown was announced, we’d already filmed the performance and our videographer, Simon’s Video Kitchen, was working on the edit ready for production.

Cancelling shows is never nice but what helped was letting people know we would soon have a ‘watch at home’ offer for them to enjoy. In some cases, people were happier that they would be able to watch the show with family members who were shielding and couldn’t come to the live event. At this point we weren’t able to share details of the streaming, so we requested that customers donate some or part of their ticket value. Those people were the first to find out about the streamed show.

We then had to make some decisions about how to share the film: should it be pay-for-view or open access? Should we set one ticket price, multiple prices or make it free in return for donations? How might people access it, and which platform should we use? For Le Navet Bete, a key consideration was how long it should be made publicly available given they had a live tour of the show lined up for the spring.

Weighing up our options, we decided that our primary objective was to make access to the show as easy and stress-free as possible. Research told us that the Northcott’s core audience were less likely to engage with digital content, so enticing them would depend on making the process easy and allowing them to ‘dip their toe in’ before making a cash commitment. We were also aware that a digital offer presented an opportunity to engage with new audiences. On average, 80% of our Christmas audiences reside in Devon so we were keen to see if a streamed option would extend our reach.

A chat with the Creative Industries Federation led to us developing a model so we could meet both those objectives. We could share the show in partnership with Little Dot Studios for a limited period via their YouTube, which already had more than 60,000 subscribers. Little Dot Studios has a simple donation function that audiences could use prior, during or after the show. With support from the Creative Industries Federation, we could market the show to a global audience, collect donations from all countries, and even get a cut of any associated advertising revenue. We knew we were in safe hands when it came to the technical delivery and that, by partnering in this way, we could deliver a hassle-free offer to our core audiences and broader network. Almost half the 13,200 unique viewers were from outside of the UK. It was a delight to chat live with audiences from Wales to Wisconsin at the streaming premiere, which included a Q&A session with the company.

What we didn’t know was how to forecast our income. How many people would donate and how much would they give? We knew we wanted to anchor the ask and settled on a suggested amount of $10. The streaming started with a short intro from Le Navet Bete stating our case for support in their inimitable style. It seemed to hit the spot – most donations were between $10 and $20 and we totalled $5,300 across the three-week digital run. I can’t pretend this is anything close to the amount we lost in cutting the live run short, but we never expected transferring to digital would entirely recoup the costs of staging a live show. What we weren’t able to do this time was sync the streaming data with our box office system. We’re now looking at ways we can do this while continuing to benefit from the extended reach our partners can offer.

Our arrangement with Le Navet Bete was that, after the cost of production, we would split the donations according to deal for the live show. I’m glad we’ve been able to drive some additional income for the company as well as our charity. We hope this increased exposure will encourage more people to see Le Navet’s Bete’s work on tour, so it will be interesting to track that once live performances resume.

What’s great is that so many people are now working towards the same goal – and there’s plenty of potential for collaboration. It’s brilliant to be working with filmmakers, theatre makers and technicians to find solutions and forge new opportunities for the sector. As ever, we’ll adapt and be guided by our audiences and the artists we work with. Watch this space!

Kelly Johnson is Marketing and Development Director at Exeter Northcott

What ‘watch at home’ gave us