From Wales to Lesotho

A group of actors with Down’s Syndrome travelled to Lesotho in southern Africa to help change attitudes to people with learning disabilities. Jon Dafydd-Kidd tells the story. 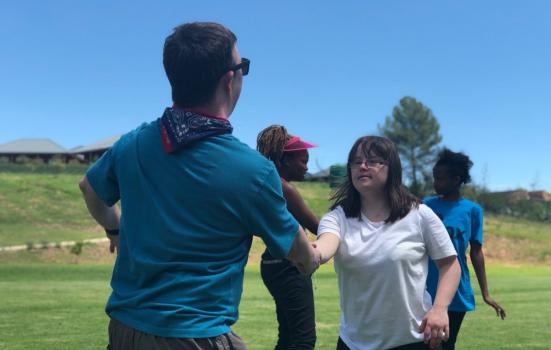 This trip to Lesotho was the first stage in Hijinx Theatre’s Able to Act project, which had come about following a scoping trip to Lesotho back in 2016. Clare Williams, our CEO, and I had travelled to Lesotho with the idea of taking one of our small-scale ‘pod’ productions to showcase what we meant by inclusive theatre.

We quickly realised it was inappropriate as theatre does not really exist as an artform in Lesotho, but we recognised that there was an opportunity to share our skills with the local community, so that they could train actors with learning disabilities and produce their own inclusive theatre in future years.

We found that learning disabilities were widely seen as a curse in their culture, with children abandoned in orphanages

We found that learning disabilities were widely seen as a curse in their culture, with children abandoned in orphanages with low aspirations for their future and no ambition.

Through our work providing professional training for people with learning disabilities and casting them in our touring productions alongside non-disabled actors, we have had first-hand experience in seeing how talented learning-disabled actors are. We see our actors achieving more than they think is possible, as well as bringing positive influences and valuable contributions to society.

We knew that by working with local drama students from Machabeng International College, based in Maseru, capital of Lesotho, on a piece of purely physical theatre, we could present a positive view of learning disabilities.

Hub Cymru Africa, supported by Welsh Assembly Government, made the trip possible by connecting us with partners in Lesotho and providing funding for the project, along with the British Council Wales.

With this support we were able to plan the project and meet the practicalities of taking our actors over 9,000 miles into an unfamiliar environment, ensuring their welfare was cared for and any risks were minimised. Amy Griggs, our Academy and Welfare Director, accompanied us and we were also fortunate to have a volunteer from the University of Cape Town.

We selected four of our learning-disabled actors from the academies across Wales. All four have Down’s Syndrome, a physically visible learning difficulty, which we felt was important as the new work was a non-verbal creative piece. With all the actors from our four academies, we developed a framework of tools and moments that we could use while in Africa as building blocks for the final piece.

They only had their first opportunity to work together on the eve of departure. They were all enthusiastic about the project and embraced the opportunities for learning, sharing and experiencing new challenges.

With total audiences of over 2,000 people, ranging from church congregations and school children to the Senior Citizens Association of Lesotho and ostracised communities for disabled young people, the key success of this project has been seeing the impact it made in such a short period of time with everyone involved.

Performances were across five locations throughout Lesotho, including the Mamohato Children’s Centre run by Sentebale, a charity that supports the mental health and wellbeing of children and young people affected by HIV in Lesotho and Botswana. Here the production was performed for all the staff and volunteers who were undergoing disability awareness training.

Palesa Mphohle, Country Director for Sentebale, said: “This was inclusion at its best. I’ve never seen such a wonderful performance as this before. It was really inspiring.”

Victoria, one of our actors, was also moved: “The trip to Lesotho has taught me that it’s important to share my disability with people. It made me think about how we are treated at home and how we can all learn from the children of the orphanage who want only to be loved and have an opportunity, which they all deserve. We should try and help them more, they are beautiful people.”

The local actors we worked with to make our cast inclusive, experienced working alongside our learning-disabled actors. One said: “I’ve learnt to be more compassionate and accepting of people with disabilities. There is such a need for this project to continue in Lesotho and start in other countries too.”

We hope that this project will continue for future years to build on its success and push for change in inclusive practices in Lesotho.

From Wales to Lesotho