How can an arts organisation be sure it is working with schools that represent the community? Lucie Fitton and Ashleigh Hibbins suggest combining arts, population and schools data. 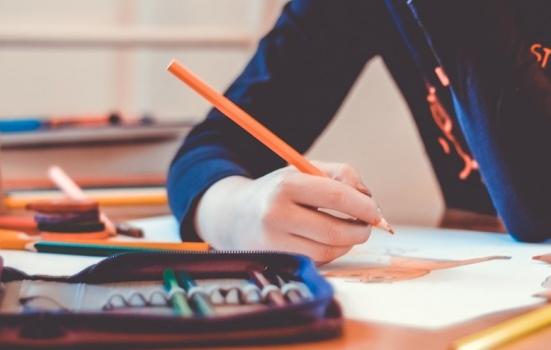 The Audience Agency’s extensive research with museums, theatres, festivals and funders tells us that teachers value the opportunity to enrich curriculum learning outside the classroom. But we also know that budget restraints, logistical planning and lack of clarity around accessing and understanding the creative offer are persistent barriers.

There’s a lot of data out there you can explore without asking schools directly, but it can be overwhelming and time-consuming to navigate

Recognising these reservations and limitations is crucial, as is keeping abreast of capacity-building support from Bridge organisations, collaborative working opportunities from Local Cultural Education Partnerships and initiatives like The Durham Commission.

A holistic, three-part approach is vital and involves:

As is true of cultural provision generally, certain schools are richly served while others lack access and opportunities to engage. What evidence do you use to decide which schools to target and engage? What data do you collect from schools to help build up a picture of who you are reaching and how this compares to local demographics and targets?

Useful information sources to consider may include the location of schools, the percentage of pupils who are eligible for free school meals (EFSM), the Pupil Premium, special educational needs and disability provision, and Artsmark or Arts Award take-up.

While legitimate concerns are sometimes voiced about taking the percentage of EFSM as an indicator for schools with a greater proportion of young people experiencing multiple deprivation, it’s a good place to start thinking about broader engagement. There’s a lot of data out there you can explore without asking schools directly, but it can be overwhelming and time-consuming to navigate. Trawling schools’ websites and Ofsted reports, reviewing Artsmark mapping, or exploring complex Department for Education (DfE) data tables can be hard work.

DfE’s yearly schools census contains a vast amount of information, including the percentage of EFSM pupils and those who speak English as a second language, all at local authority, postcode and individual school levels. Working alongside researchers and data analysts, we have come to recognise this geographic granularity as the holy grail of data.

We can collate information about schools at an individual and local authority level, or any geographic grouping. The geo-mapping of this data then enables us to combine other geo-specific datasets to build up a more holistic picture. We can even compare this schools data with Audience Spectrum and Active Lives data, exploring arts, museum and library attendance and participation at local authority level.

Audience Spectrum divides the population into ten profile groups that identify what people in your area like to see and do and give a sense of their attitudes towards culture. This is informed by a wide range of data – from Audience Finder (to which 689 cultural organisations contribute audience data), to census and Taking Part data, along with primary research.

Because Audience Spectrum helps to understand the wider household engagement, it adds a richer, deeper layer of understanding to the schools data metrics. In this context, we focused on assessing the percentage of households that profile as lower culturally engaged segments.

Plotting EFSM and Audience Spectrum data at local authority level means we can compare the status of pupils in a local authority and the level of arts and cultural engagement. It is even possible to look at the data in the context of individual schools’ catchment areas, which is likely to generate a still clearer picture of these relationships.

It’s worth noting that we were looking for strong positive correlations between the data, which is not in itself an indication that one causes the other. To put it simply, we’re not suggesting that a pupil’s status necessarily dictates their cultural engagement level, but rather noting possible relationships between the two.

It is also important to note that, while there is an obvious trendline in the data, there are some outliers. For example, one dot on the chart indicates a local authority with a relatively low percentage (18%) EFSM, but a very high percentage (85%) of households of lower engaged Audience Spectrum profiles. There may be very specific localised reasons for this that require further investigation. 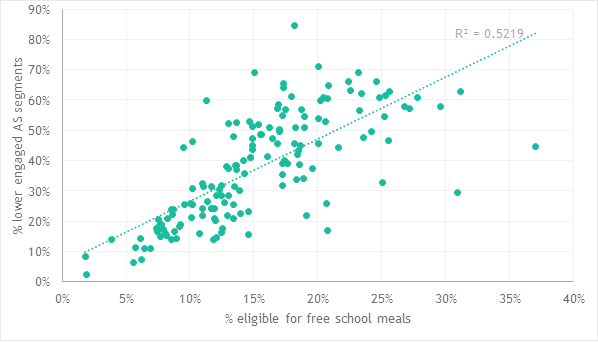 Acting on the evidence

Once you have entered the postcode of your organisation you can choose the ‘Segment’ (i.e. profile) you are interested in. If you want to target young people who are more likely to be eligible for free school meals, you could look for schools in areas with large proportions of any of these groups: Up Our Street, Facebook Families, Kaleidoscope Creativity or Heydays. The mapping tool will show you what proportion of each segment type is in each postal sector so you can see if there are schools located in the darker areas that you are not engaging with.

You might also want to check if this is an area from which your organisation already draws an audience and whether your existing knowledge of that community might be useful in devising ways to work with its schools.

Second, you can then target and engage the right schools. The data we explored offers the possibility to collate complex sets of information in user-friendly and engaging ways. You can then find out whether the schools you are already reaching are representative of the local population and find new schools to target.

It is useful, for example, to know if the schools you usually work with are representative of your local population. You can use local authority EFSM data as a benchmark and compare the percentage of EFSM in the schools you are currently engaging. To try this out, we looked at Birmingham. 27% of pupils in Birmingham are eligible for free school meals - the sixth highest percentage of any local authority in England, so pretty high. Overall, to reach pupils experiencing a greater level of deprivation, we want to find schools with a greater percentage of EFSM than 27%. Exploring the data on an individual school level showed that around half (130 schools or so) have greater than 27% EFSM, with a small number of these being significantly higher still.

Using mapping tools, it’s possible to clearly demonstrate your current schools engagement, including who you are engaging with, schools with a higher than local authority average percentage of EFSM, and the locations of the lower engaged segments. The mapping can even focus on narrower catchment areas, particularly useful for understanding a localised focus area within a larger local authority.

If you are planning to target schools with a high percentage of EFSM pupils, you still need to find out which pupils are actually participating in your activities. If this smaller group of pupils you engage doesn’t necessarily end up representing that targeted percentage, that’s something you need to acknowledge and consider carefully in future planning.

If you would find it useful to have a school profiling and mapping tool that could offer this kind of analysis with just one click, please contact us at hello@theaudienceagency.org.