Can the cultural sector embrace collaboration as an essential tool to dismantle racism? In launching their new campaign, Arts Against Racism, Inc Arts thinks it must. 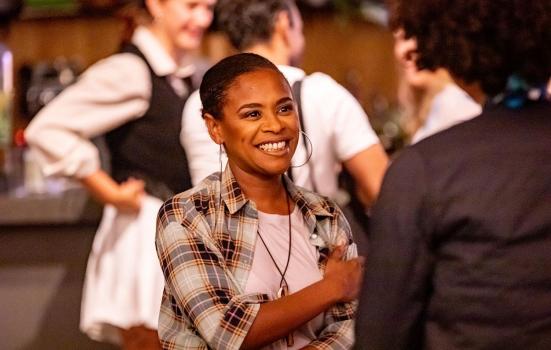 In May, it will be two years since the murder of George Floyd prompted the arts and cultural sector to reassess the institutionalised racism that was harming their staff, creatives and audiences.

In the summer of 2020, we saw a flurry of Black Lives Matter statements posted online. New diversity commitments were shared across work emails, and anti-racism training was booked by theatres, galleries, production houses, museums and dance companies.

In these two years, we have seen both remarkable progress and predictable stasis when it comes to anti-racist practice and change within the arts and cultural sectors.

We have also been relieved to see a shift in the language used by the sector, replacing ‘BAME’ with ‘ethnically diverse’, and ‘minority’ with ‘global majority’. However, as we all know, two years is just the beginning of national, industry-wide change.

A snapshot of the current state of the industry

Already in 2022, research shows that the arts and cultural sector still has a long way to go before it has reached a truly diverse, equitable and fair workforce. The Culture in Crisis report from the Centre of Cultural Value gathered data as further evidence that the pandemic has seen social inequality reflected by the cultural sector.

Specifically, in music, performing and visual arts, ethnically diverse workers saw larger reductions in hours during the pandemic than their white colleagues.

While we were delighted to see diversity across BAFTA nominations and wins this year, the Creative Diversity Network’s annual report on inclusivity revealed that ethnic diversity in leadership roles is consistently low in the UK’s television industry. And further research from the Sir Lenny Henry Centre for Media Diversity confirmed that “racial stereotypes still loom large in documentaries about Black people”.

Since 2020, Inc Arts has been at the helm of anti-racism work across the arts and cultural sector in the UK. Whether in EDI consultancy and training, sector-based research, nationwide campaigns, or sector support and mental health, we are witnesses to the state of play across the sectors. We see the same issues crop up everywhere.

In order to bring about real and meaningful change, we are championing collaboration and collective action. To that end, we are developing a long-term, cross-sector campaign to dismantle racism across all arts and cultural sectors: Arts Against Racism.

In partnership with What Next? – a free-to-access movement across the UK, that brings together arts workers to champion and strengthen the future of the sector  – the Arts Against Racism campaign will launch later this year, in September 2022.

It’s important to note that it is not our work alone. To ensure that this campaign represents everyone and works for everyone, we initiated a collaborative working model that saw over 400 representatives from across the UK, across multiple artforms, develop this campaign.

Arts workers and artists from across the industry took part  in a series of dynamic workshops to answer the needs of the industry. Amongst the 400 attendees were organisations from a broad spectrum of the creative and cultural industries with both national and local reach. Together, we developed the five pillars of the campaign.

The core pillars of the campaign address the various needs of building an equitable workforce, and of tackling instances of racism, inequality and micro-aggressions.

The first pillar – Code of Conduct – is a fit-for-purpose code to be adopted and followed by all arts and culture organisations signed up to Arts Against Racism. The Celebrate pillar will ensure we consistently celebrate and reward positive anti-racist practice in the industry.

The Report pillar is an independent space for raising concerns that is adaptable to the needs of each sub-sector and region, while also being appropriate and accessible for audiences, artists, creatives and the workforce (both freelance and employed within organisations).

The Monitor pillar is a mechanism for monitoring the creative and cultural sector’s anti-racist actions in order to create an inclusive environment. And finally, the Engage pillar is an overarching strategy for building engagement by audiences, workforce and creative talent with the Arts Against Racism campaign.

So, can the different parts of the cultural sector collaborate effectively to dismantle racism? It is not a question of can, but a question of must. We must come together to take cross-sector, nationwide action.

We must celebrate our achievements, learn from best practice and demonstrate our commitment to this work. This is how we listen and learn as an industry and put care at the forefront of our anti-racist future.

We are gearing up to the September launch of Arts Against Racism and you can start to get involved in this long-term change now. To join Arts Against Racism, register for campaign updates here. And if you are interested in collaborating in any way, our virtual door is always open. You can contact us on admin[at]incarts[.]uk.