Refugees to the fore

As an arts festival with an explicit social change mission, Refugee Week faces some unique challenges. Emily Churchill Zaraa discusses how it tackles them head on. 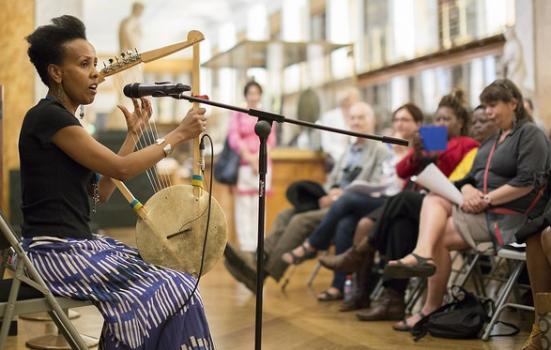 Refugee Week is a UK-wide festival that takes place around the time of World Refugee Day on 20 June, with the aim of connecting audiences and local communities through the creative contributions, actions and experiences of refugees. It was founded in 1998, in response to rising hostility towards refugees and asylum seekers, and in 2016 over 600 events took place across the UK.

A space for different voices

Refugee Week makes no bones about the fact that it has an explicit social change mission: to help shift public attitudes and create a more welcoming environment for refugees. While the project is coordinated by Counterpoints Arts, our national partners are mainly advocacy and service organisations engaged in the urgent work of supporting newcomers to Britain and campaigning for more humane migration policies.

Local organisers use Refugee Week as a platform to take refugee narratives and artwork into libraries, museums, places of worship and schools

Many of our local partners independently organise the majority of events under the Refugee Week umbrella and are activists or volunteers supporting those who have sought safety in their communities.

Refugee Week seeks to drive social change by giving a platform to less heard voices and narratives in several ways:

Who is listening to these new voices is a crucial question. Our partners, both local and national, are passionate about reaching beyond existing networks and avoiding both on- and offline ‘echo chambers’. One way Refugee Week does this is by presenting artists and artforms that appeal to different audiences: Logic for hip hop fans, t-shirts by Marios Schwab and Studio Moross for fashionistas, and a Refugee Week collection on BFI Player for film buffs, for example.

Another is by taking interventions into open public spaces, where they can reach people who aren’t seeking them out. Manaf Halbouni’s Nowhere is Home, installed outside the Southbank Centre, was seen by an estimated 106,000 passers-by in 2015.

Likewise, visitors to the British Museum during the 2016 festival found themselves engaging in themes of displacement through interactive art installat

ions. And around the country many celebrations happen in public outdoor spaces, such as the British Red Cross’s family-friendly celebration in Leicester’s Town Hall Square.

Our broad umbrella model means we have hundreds of partners in different corners of the UK, giving access to audiences and communities that would otherwise be hard to reach. Local organisers use Refugee Week as a platform to take refugee narratives and artwork into libraries, museums, places of worship and schools, including in the towns and cities where the need to connect communities is most urgent.

There are inherent tensions in coordinating an arts festival with a social change mission. How do we give a platform to refugee artists without reinforcing labels? When does ‘art with a message’ become propaganda? What impact does such a mission have on artistic freedom and quality? This is, and needs to be, a continual conversation, but a few key elements are useful in helping to strike this balance.

One is that while the festival seeks to give opportunities to refugee artists, the project would be self-defeating if it pushed refugee artists into silos or made immigration status a criteria for participation. So we showcase artists from many backgrounds, and refugee artists are free to wear that label or not. Many artists with experiences of displacement explicitly explore this in their work while others may be classical singers or folk instrumentalists simply sharing their craft.

A second is our focus on arts as a space for exchange and conversation rather than a conduit for a simple message. Displays of community artwork may open up conversations between local and newly arrived neighbours, while interactive installations actively facilitate encounters between strangers.

Finally, the flexibility of Refugee Week as a platform allows space for different types of expression. Poppy social media graphics showing refugee contributions can sit alongside more bold and unusual artistic offerings, and local events can be shaped according to their context, without heavy-handed input from central coordinators.

Benjamin Zephaniah said he wanted a world where Refugee Week was no longer needed, and he is of course right. Until then, activating the arts for social change, and exploring all the questions that raises, remains an important mission.

Refugees to the fore