The fight for racially equitable funding in the creative industries is what drove Kevin Osborne to set up Create Equity. Here he argues the need for Black and White leaders to work together to make it happen. 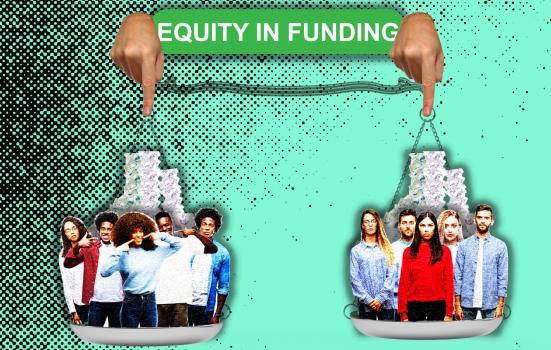 The question of whether increased funding to Black-led organisations necessarily would mean less funding for White-led organisations is an important one. Is equitable funding a zero-sum game: a right or benefit won by one side is lost by the other?

The importance of the question is that it illustrates the scale of the problem to be fixed. It represents the extent to which White leaders and their organisations will need to sacrifice power and financial status to achieve equitable funding. It sheds light on the degree of inertia towards meaningful change and initiatives that work.

Clearly, the higher the level of personal sacrifice and risk to lifestyle and livelihood, the more resistance there will be to making the change that is needed to achieve a fair funding system. By extension, if there is increased resistance, the answer also reveals the extent to which Black leaders will need to take the same personal risks to their status and financial security to challenge those who have control of, and benefit from, current resources, for a fair settlement.

If equitable funding remains a zero-sum game, there are serious implications for Black and White leaders alike. At a time of heightened awareness of racial inequalities, Black leaders are less willing to tolerate the status quo. But in a zero-sum system, a fairer distribution to Black-led organisations would mean defunding incumbent institutions, which may create a backlash from a predominantly White-led sector. The moral case for doing this is strong, but the personal implications on the lifestyles and livelihoods of White leaders would make this hard for them to swallow.

An underinvestment of £126m per annum

It is vital that we change the current ‘win-lose’ situation by increasing overall funding into the arts and creative industries so that we avoid the inevitable resentment, division and conflict that comes with ‘losing’. There are several ways of achieving increased funding including government policy, corporate social responsibility and public sector investment.

An estimated £1bn of public and private grants is spent on arts and culture each year. Of this, only an estimated £24m (2.4%) goes to Black-led organisations. This represents an underinvestment of £126m per annum. To achieve equitable funding within a decade would require an additional £1.26bn to Black-led organisations. Without significant extra cash, equitable funding in the arts inevitably becomes a contest between Black and White leaders over the finite pot of funding available.

This direct conflict of personal interest and aspiration between Black and White leaders is unlikely to be constructive, nor is it comfortable. It forces fundamental questions. What are we as Black leaders willing to risk in challenging those in power to achieve equity?  And what are we as White leaders willing to relinquish in terms of power and status - and perhaps even personal income - to achieve a fair distribution of funding?

In a zero-sum scenario, I am committed to advocating and campaigning for racial equity, putting me in direct conflict with the personal interests of my White counterparts, some of whom I rely on to fund my projects. Such infighting is unlikely to end well for anyone and, given the structural power imbalances, least of all Black leaders.

To avoid counter-productive conflict, we must urgently explore ways to increase the funding pot. There are many options for doing this.

1.    Government intervention through various means including:

2.    Reallocating some of the billions of pounds of endowments held by funders to deliver social impact, as suggested by Sir Ronald Cohen in his book ‘Impact’.

3.    A requirement for commercial businesses in receipt of tax benefits from a Comprehensive Spending Review to redistribute them equitably.

4.    Impact investment in social enterprises with innovative ideas that can deliver social benefit and create scalable solutions. These can deliver financial returns to both investors and the social enterprise - and save government money in the long term. What Sir Ronald called a ‘win, win, win’ scenario.

We must address the personal dimension head on

The political arguments for equitable funding are well understood. But in the end, as human beings, it is the personal dimension that prevents this from happening. To paraphrase the American feminist, Carol Hanisch, the political is inevitably personal. Without addressing the personal dimension head on we are unlikely to develop effective policies and initiatives to fix the problem.

Our options are clear: continued inequitable funding, redistribution within existing budgets, or redistribution through increased budgets. The first option is untenable, the second unworkable and so we are left with the third, which is eminently achievable, and within a reasonable time frame.

We should act now, Black and White leaders together, rather than in competition, so another decade isn’t allowed to pass without effective action.

NB. We have used the term Black. We recognise the diversity of individual identities and lived experiences, and understand that Black is an imperfect term that does not fully capture the racial, cultural and ethnic identities of people that experience structural and systematic inequality.