One story is not enough

Middle Eastern and North African arts professionals have been all but invisible in the UK. It's time to find our voice, take ownership of the narrative, and change how the industry sees us, writes Sepy Baghaei. 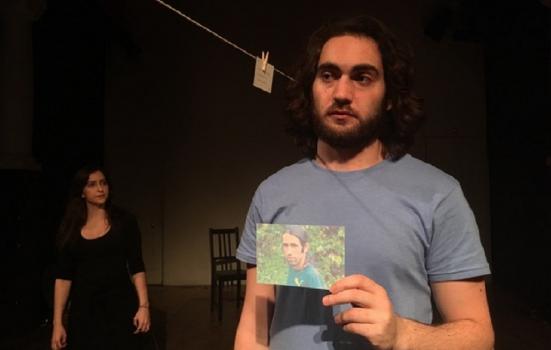 A photo from CITIZEN: a play about experiences of Iranian migrants written and directed by Sepy Baghaei
Photo:

How many Middle Eastern and North African (MENA) people can you think of who work in British live and recorded arts? How many are household names?

When I posed this question to friends and colleagues, there were only two names that came up. First was Omid Djalili, a comic and actor with Iranian roots who hosted The Omid Djalili Show. The second was Egyptian actor Amir El-Masry, who you may know from HBO’s Industry.

That is not to say the talent doesn’t exist – it does. But if we are to understand why the profile of MENA arts professionals has been so small, perhaps I shouldn’t be asking who is being represented but how.

Growing up, I never saw a character or story from Iran on stage or screen – until I decided to tell a story myself, that is. In 2018, I wrote and directed a play called CITIZEN, which was inspired by interviews with Iranian refugees and migrants. Something that struck me about that experience was the way non-Iranian audiences responded to the show. They were surprised: surprised that a show about a Middle Eastern country could have so much comedy in it, surprised to learn that Iranians speak Farsi, and surprised that sharing massive, intricately prepared feasts is integral to Iranian culture (think My Big Fat Greek Wedding but with truckloads of saffron rice).

It’s no wonder audiences were surprised by CITIZEN; they didn’t have anything to compare it to. It highlighted the importance of visibility. There are many ideas of who MENA people are and what we look like, which can get in the way of sharing the rich tapestry of stories we have to offer.

We don’t all look a certain way, speak a single language, or share the same belief systems. But what we do have is a wealth of stories, experiences and talent that remain largely untapped. We are here, and we are excited to add our voices to the British live and recorded arts industry.

Last year, prior to Covid, I was due to direct a play called Burkas and Bacon Butties, which told the story of a young British-Egyptian woman growing up in Wigan. I distinctly remember one of the actors I had cast – who was British-Egyptian herself – expressing how this was one of the few times she’d had the opportunity to play an Egyptian character.

The people of the MENA region are hugely diverse. We speak a multitude of languages, practice various faiths, and possess a variety of physical characteristics. All too often though, MENA actors are not cast in roles connected to their heritage because they are perceived as ‘not looking enough like’ the country they’re from.

I’ll never forget reading a post by a MENA author I admire, who has published two acclaimed books featuring strong MENA women. She was told by a publisher, “we’ve already had three books from the region recently; they’ve had their moment”, as if to suggest there’s an invisible quota of ethnic stories. I had a similar experience trying to get CITIZEN programmed. One artistic director told me: “I’m sure it’s a lovely show but there’s no audience for it”.

The challenge of MENA visibility doesn’t just run skin-deep: it extends to misconceptions and stereotypes around who we are culturally. With disappointing regularity, our region only gets called on for stories about war and oppression. Anything else is sidelined because it doesn’t conform to what programmers expect of work connected to the MENA region.

Since the 70’s, there have been various movements from marginalised groups seeking recognition. The tireless campaigning of Black, South Asian, East and South East Asian, LGBTQ+, Deaf, Disabled and Womxn’s groups have paved the way for communities like ours, who are still referred to as ‘other’.

The Black Lives Matter movements were a critical call-to-arms for many industries, including the arts. Following on from all those who came before us, we set up MENA Arts UK in summer 2020. MENA Arts UK is a not-for-profit arts organisation which aims to promote, support and lobby for MENA+ arts professionals working in the UK. MENA+ is an inclusive term we’ve coined to bring together individuals from the Middle East, North Africa, and surrounding areas.

We have launched an online directory where MENA+ artists can list their area of work and specify their region of origin and any languages they speak. So far, more than 200 actors, musicians, camera operators and animators have signed up. We also launched a competition for our directory members, awarding eight artists £1000 each to create a one-minute film that celebrates what people from the MENA+ region have in common. These will launch online in March.

By increasing the visibility of MENA+ in this way, we hope to catapult our community into not only greater employment opportunities, but greater understanding of who we actually are. We hope that, in ten years’ time, we’ll never again hear the sentence, “we really wanted an actor from [insert MENA region here], but we just couldn’t find them”.

If the talent becomes visible, there is no excuse not to hire us. In hiring us, you realise we are a huge, diverse community, and there is, therefore, an audience hungry for our work. And the final domino: when you realise that we make up a good chunk of workers and audiences in the live and recorded arts, you might also realise that commissioning one ‘MENA work’ every decade is, quite simply, not enough.

Sepy Baghaei is a theatre director and Co-Vice Chair of MENA Arts UK.

One story is not enough