Pulling a community venue back from the brink needs vision, commitment and cost-effective solutions for tackling commercial challenges. The Royal Hippodrome Theatre has harnessed all three, writes Claire Boot. 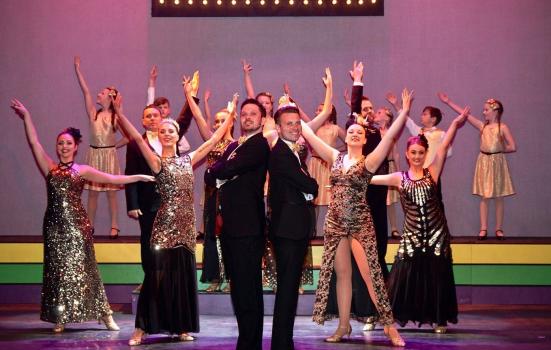 With rising maintenance costs and dwindling audience numbers, the future of Eastbourne’s Royal Hippodrome Theatre was in doubt until a local couple with a background in amateur dramatics stepped forward with a vision for turning the theatre around into a thriving community venue with something for everyone.

From producers to proprietors

Alex and Debbie Adams founded Trapdoor Theatre School in 2006, providing term-time drama training for young people aged four to 18. At the request of the Eastbourne Hospitality Association, a forum for the town’s hoteliers, the Adams began using the theatre for their theatre school productions, and from 2012 also produced the summer season. “It became special to us because it was like a second home,” said Alex. “We were here performing for six months, two nights a week, every year.”

When ticketed events are free to audiences, there’s no charge either

The theatre, a cosy Victorian gem in the charmingly named Seaside Road, once hosted the greatest stars in variety and vaudeville, but escalating maintenance costs and declining audience numbers raised serious questions about its viability. Determined to see the theatre thrive, the Adams raised £500,000 for refurbishments, and this eventually snowballed into them taking over the place.

The Adams became directors of the venue in April this year, inheriting a fully working theatre. Alex says: “It was never the intention originally to take over the building, but we couldn’t have wished for it to turn out better.”

The current programme was finalised by the previous management, but the couple are excited about the acts they have engaged for the year ahead. “It’s still the same kind of programming at its core,” explained Alex. “We’re a community venue and we want to give variety for everybody.”

With tribute bands, comedians, children’s shows and audiences with well-known personalities, nearly every Friday and Saturday night in 2019 is booked. A key aim is to see the venue in use throughout the year, beyond the well-established summer season, and Alex estimates there are already more shows coming up in February to June than there were in the whole of 2017.

The theatre enjoys the active support of local people through its dedicated band of volunteers, who work closely with the small core team of paid staff and freelancers. “Our volunteers are brilliant,” said Alex. “We couldn’t run the business without them.” About 40 people frequently give their time on performance nights to usher, sell programmes and interval ice creams, and manage the bar.

Throughout the year, volunteers deliver brochures and flyers to the town’s hotels every month, fundraise for refurbishment projects and lead regular tours of the building. “They’re passionate about the theatre and have a strong sense of ownership. They also like a night out to see a show for free!” says Alex.

Keeping costs to a minimum is vital when budgets are tight and efficiency is a top priority. The loyal team of volunteers is part of this, but so too is a box office system that is low cost, and at the same time versatile enough to enable the venue to pursue all opportunities for selling more tickets.

Although the new directors inherited the existing ticket-selling platform, TicketSource, they felt compelled to explore alternatives to ensure they had the best platform available. “We found disadvantages with all of them”, explained Alex. “Some required a large fee in advance ticket sales, while TicketSource doesn’t cost anything up front.” Others offered software-based systems. “Often, you can only download these on to a limited number of machines, which would have caused us massive issues. And some are only on Windows and I’m a Mac person.”

In the end, the ease of use and cost-effectiveness of the all-in-one system meant that TicketSource was the obvious choice. Free to use for event organisers, with no set-up costs or monthly subscriptions, it also makes no charge for cash, cheque and complimentary bookings. And when ticketed events are free to audiences, there’s no charge either.

The Adams have used the system’s flexibility to create multiple additional logins, for the town’s tourist information office and several hotels. Whether residents or holiday-makers, customers can buy tickets in person at various locations in Eastbourne, including the theatre’s box office, as well as online or by phone.

The theatre was designed to hold almost 1,200 people, but with modern requirements for comfort and safety, the capacity is currently set at around 600. Many of the touring productions visiting the venue are suitable for a 200 to 500 seating range. To achieve the best seating arrangement for each show, the highest section of the auditorium – the upper circle – is routinely blocked off on TicketSource and only opened for bookings once the lower levels are full, bringing the audience close to the performers.

As Alex noted, “If we’re around the 300 mark, it’s a nice full feeling and it’s comfortable for everybody.” Finally, to make sure the theatre’s much-appreciated volunteers are not forgotten, the system automatically allocates a row of seats for the ushers in every performance.

From Marie Lloyd and Charlie Chaplin to La Voix and Strictly’s Giovanni Pernice, the theatre has entertained audiences for over 135 years, and the new directors are determined to keep the venue firmly rooted in the local community. In the short term, they plan to renovate more areas of the building and upgrade its technical equipment, and eventually stage more in-house productions. “Once the building is better and the programme is running at a steady rate,” explained Alex, “the aim is to become more of a production house rather than a receiving house.”

Throughout all the changes behind the scenes, the team pride themselves on being accessible to the public. The administration office is located at the front of the building at street level, so if anyone has a complaint they are only one step away from speaking to one of the directors.

Above all, the staff and volunteers are focused on welcoming the town’s residents and visitors through the doors of Eastbourne’s oldest working theatre for an enjoyable evening of live entertainment. “When you go in, the theatre has a feeling of warmth,” said Alex. “That’s what makes it special.”

Claire Boot is a freelance writer and journalist.
www.ticketsource.co.uk

This article has been sponsored and contributed by TicketSource.