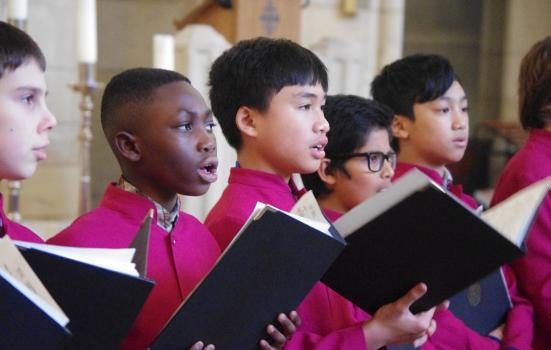 Some years ago I remember skimming through an article in a dusty periodical titled (according to my memory at least) ‘Organ or Orphanage?’. The title struck me as reflecting a constant tension in the arts between creative extravagance and inarguable utility. After all, can anyone really justify splashing the cash on a giant musical machine when children are in desperate need?

This tension is particularly acute once God is thrown into the mix; teaching us to lift up the lowly, fill the hungry with good things. So we might ask if cathedrals that spend considerable amounts of money on their choirs are furthering their mission, or if they’re recklessly gilding buildings that are little more than another tourist checkbox.

This musical world became briefly news-worthy in the furore around Sheffield Cathedral’s choir. While we might relish the compelling narrative of a Trollope-esque spat in the cathedral close, we should examine how the ingredients – the clash of priority and perspectives, mixed with vocational passion and instinct – might undermine something far more precious than individual agendas: the futures of the children singing in these choirs.

It’s a musical world that is as divided as society in its distribution of privilege; a musical world where access to opportunity is hugely unequal; a musical world facing both a financial reckoning and crisis of balance - God? Art? Heritage? Education? There is so much transformational potential in the idea of a cathedral choir, but can our cathedrals harness this before becoming irrelevant, a heritage industry for the soul?

When I was seven, I could have joined a cathedral choir had I been musical enough, but I’d have had to board at a private school. My sister wasn’t even able to sing in our parish church choir – sorry, boys only.

In many places access to these opportunities is now far wider, particularly in metropolitan cathedrals, elevated parish churches and those cathedrals whose choir schools have already closed and necessity has inevitably driven invention. This is not the case in our most famous choral institutions. Are there any other environments where it would still be acceptable for an elite opportunity to be available to a boy, but not a girl? Should a great number of these only be accessible to some of the 7% of children privately educated in the UK? Can we start to see why many of these choirs are so exposed to reform when access to their riches is so limited?

But enough sniping (for now). The transformational potential embodied in these choirs is enormous: the work ethic instilled, the trust at the moment of performance, the teamwork, the musical skill, and (whisper it for those who like sacred music but not the sacred content) the saving of souls.

Thrillingly, achievement in a cathedral choir and the subsequent fruits of this should be an outstanding example of musical excellence available without regard to social circumstance. As I write this I’m listening to a recording made during lockdown by our cathedral girls’ choir in Leeds – wonderful singers who have travelled through our choirs since enjoying whole-class singing in primary school with one of our Choral Directors. The music, mixed from those crackly fragile individual recordings made on phones at home, is the tudor John Taverner’s great motet Quemadmodum; the singers, young people – black, brown, white – from across our city, educated at state schools and one of six choirs running at the cathedral.

Our foundation is a programme reaching some 4,500 children a week across the Diocese in whole class singing, where year groups work with a Choral Director for at least two academic years and have access to our extensive range of after-school choirs. The achievement is spread widely, deliberately without deference to the cathedral at the centre. For instance, our youth choirs in Bradford enjoy opportunities including BBC broadcasts and partnership in the Gabrieli Consort’s youth choir programme, Gabrieli Roar. The standard of our best children’s choirs could pass in any grander cathedral. It’s achievement rooted in day in, day out work in classrooms, much of this in schools that draw pupils from the worst 10% of deprivation. It’s financially viable because the schools are buying the service. We’re not dropping nuggets of outreach on them, but are engaged in a long-term educational partnership where quality teaching matches the schools’ vision for their pupils.

Is this replicable? Could York Minster decide to run its choirs like this? The path towards the summit of cathedral music (and I suspect, the career path of Anglican clergy) doesn’t have many shelters in which to learn about management or strategy.

Vocational passion can lead to an obsession with performance standards that becomes a barrier to access, relying on children’s prior attainment at a ludicrously early age. Passionate defence of detail leads to relationship breakdown, leads to a lack of the long view. This feeds into pseudo-professional bodies where looking at cathedral libraries can feature more frequently than challenge about structure, models, diversity.

While I oppose exclusivity and the confusion of elite with elitism, I don’t doubt that there is much wonderful work going on. But breadth and vision could make this so much more secure and have so much more impact. To sit back on heritage, to confine the vision to a particular notion of liturgy, is to invite the wintry trees and old age of Shakespeare - bare ruin’d choirs where late the sweet birds sang.

The young people we work with are so talented, but the gulf in opportunity with some of their peers is so huge. Let’s build choirs - indeed any arts organisations - that fight to bridge that gap, creating musical excellence and a fairer future.

Thomas Leech is the Director of the Diocese of Leeds Schools Singing Programme and Musical Director of Bradford Festival Choral Society.