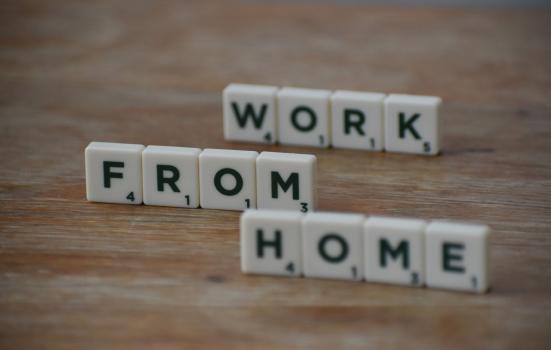 The widespread shift to working from home has been one of the most substantial effects of Covid and one that looks set to have a long-term impact on cultural engagement.

Latest findings from the Cultural Participation Monitor, The Audience Agency's nationwide survey of views about participating in arts activities, suggest that not only do people prefer home working but around a quarter of working-age people expect to do it most of the time in the future - a significant increase on pre-pandemic levels.

If those people aren’t travelling to work, they aren’t popping to shows after the office either, unless that office is in the spare room and the show is down the road... Enter, perhaps, the era of local arts organisations, while commuter-reliant locations lose out?

The evidence confirms the logic that people expecting to work more locally are also planning to engage more locally. Given the shift to home working has predominantly affected those traditionally most engaged in (institutional) arts and culture, this could mean a serious pivot in regional cultural provision.

What has changed so far?

Of those who worked during the pandemic, most did so from home at least occasionally. Our research shows (in line with the Office for National Statistics (ONS) survey’s finding) that working-aged people were split into rough thirds, namely those:
•    who worked from home all or most of the time (32%),
•    who did so only occasionally or not at all (36%),
•    or who weren’t working during the period (32%).

In fact, the most recent ONS research, published just this week, showed that 38% of working adults surveyed 27 April- 8 May 2022 reported having worked from home at some point over the past seven days.

Only about a quarter had worked from home at all pre-Covid (only 5% mostly from home) and our data suggests almost three quarters of those who did so during the pandemic were doing it for the first time or significantly more than they had before (73%).

This is a big lifestyle change but one which, to a large extent, didn’t immediately impact cultural engagement patterns as there wasn’t much available for people to engage with during that period.

If this trend persists as cultural provision edges back to normal levels though, winners and losers among the organisations vying for audiences’ attention will inevitably emerge. And this 'if’ is increasingly pressing since only 20% of people are still resistant to attending the arts due to Covid.

Why does this matter?

We have long known, from research like Orion Brook’s 2008 Snapshot London, that there is a strong link between commuting patterns and cultural attendance. By and large, working people engage with the arts either where they live and/or where they work. The impact of those two locations suddenly being the same place for large numbers of the population could trigger a substantial engagement shift.

This is particularly worth considering where there are strong cultural offers in commuter-belt areas (e.g. Outer London) or where there are substantial commuting patterns between cities (e.g. higher proportions of people in Bradford commuting to Leeds than vice versa). In these instances, greater working from home would be likely to increase engagement where people live, at the expense of where they used to work (boosting Outer London and Bradford, in these examples).

Furthermore, almost half of those working from home suggest they are spending less because of it, providing a relative advantage in the form of disposable income to spend as part of a new, less expensive, more local lifestyle, as cost-of-living rises start to bite.

Will the trend continue?

The key questions, then, are:
•    whether working from home will continue at similar levels,
•    and what the effect on attendance patterns is likely to be if it does.

The former of these is easier to answer than the latter.

Although about one in six of those who worked from home during the pandemic don’t expect to over the next three months, there is little expectation that the overall levels will drop much beyond that point.

58% of those who’ve worked from home during the past two years expect to ‘most or all of the time’ in the next three months. This is down from 75% during the pandemic, but it only drops to 52% looking further ahead.

This suggests we could see around a quarter of the employed population working from home ‘most or all of the time’ in the longer term, in line with YouGov’s finding that 70% of people think workers will never return to the office in the same numbers.

So, there is appetite for the shift, as well as expectation that it will persist (although people do expect to be going into the workplace still a little more than they’d like).

There is also evidence of a range of employers putting in place measures that will ‘lock in’ working from home in the future, for example recruiting staff remotely and giving up or reducing office space (both things that we have done ourselves at The Audience Agency).

The ONS asked businesses about this recently and, overall, nearly a quarter intend to use increased homeworking as a business model (26% in the arts, entertainment and recreation industries themselves), and the figure rises to 40-50% in professional, IT and education sectors – all significant cultural engagement feeder groups.

Combine this with widespread adoption of relevant technologies and reorganisations of home spaces – not to mention moving to lower-cost areas for housing - as well as people getting used to foregoing the time and money drain of commutes, and it is easy to see how these new patterns could persist.

Which audiences will be most affected?

The profile of those expecting to work from home in the future is also likely to accentuate the impact on arts and cultural engagement, with many higher-engaged groups more likely to make that change (as with the industries listed earlier). 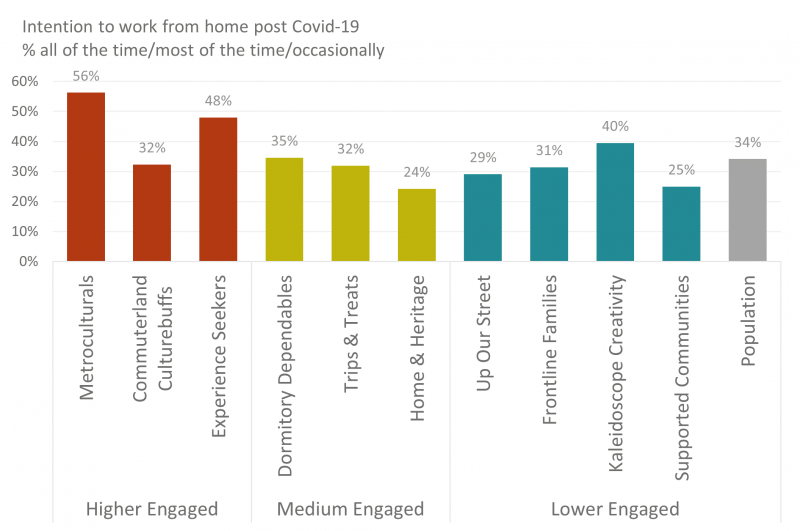 Metroculturals (56% of all respondents in this category) and Experience Seekers (48%) are particularly likely to work from home at least occasionally ‘once there is no threat from Covid', compared to 34% of the overall population. This too is in line with the ONS finding that high earners are more likely to have hybrid or home worked in the most recent months, as things have returned towards ‘normal’.

This is also more likely to be the case for Londoners (52%), those who are neurodivergent (55%), those with dependent children (52%), with degree level qualifications (46%) and in higher managerial and professional occupations (43%).

Some of these predicted longer term increases in home working do appear to be linked to concerns about Covid. A very on the nose 19% of those who are currently ‘happy to attend’ expect to work from home all the time post Covid, while a greater 27% of those who remain ‘not comfortable’ or ‘not interested in’ attending arts and culture events because of the lingering threat of the virus intend to do so.

Likewise, those who expect to work from home all or most of the time are more likely to say that ‘we should do everything we can to reduce Covid’ rather than ‘it’s just something we have to accept and try to live normally’. Regardless of short-term reasoning though, we can be confident at this point that the home working trend will far outlast the immediate threat of the virus.

The heart of the matter, then, is that we expect this to result in an appreciable shift in engagement patterns, with more and different audiences springing up in areas with more home workers, bringing with them differences in cultural attitudes, tastes, and behaviours. Changes to the rhythms of our working lives will inevitably mean changes to how we spend leisure time as well and, as audiences and their expectations change, organisations will need to adapt to meet them.

How can you start preparing for the shift?

1.    Check whether your core audiences are more likely to work from home, either by looking at their profiles and lifestyles, or asking directly through surveys.
2.    Track data on home working and commuting patterns (e.g. from ONS and the Department for Transport).
3.    Identify differences in engagement patterns between your local and non-local audiences.
4.    Renew focus on understanding your local audiences and their preferences, including occupations, preferred transport options, tastes, engagement patterns, etc.
5.    Use this understanding to experiment with different formats, venues, times etc. to reach changing audiences, with altered work-life balances and styles.

Oliver Mantell is Director of Evidence and Insight at The Audience Agency.

Many voices, open minds, commitment to change
Home office, home crowd
Can you do more together than alone?
2020 festivals: there’s no going back
Meaningful segmentation
Everyday Audience Finder