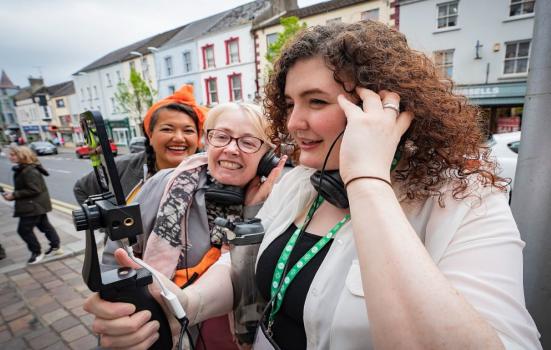 My name is DJ McDowall and I’m a mischief maker.

I’m a co-conspirator, a conduit and a catalyst for innovative, impactful and grassroots creative community engagement. I’ve been a practitioner and consultant in this field for nearly 30 years.

I was born and bred in Dumfries, and – apart from studying at art college – I’ve always been active in my local community.

After college, I worked with Dumfries and Galloway Council for 20 years, delivering youth services that used participatory creative methods to co-create issue-based projects through music events, film, and immersive theatre to raise awareness of issues affecting our communities.

However, throughout my career there was a thing I kept sensing, but I could never quite figure out what it was. I knew that local issues - high suicide rates, high teenage pregnancy rates and poor mental health - affecting our young people were linked by a common thread I couldn’t put my finger on.

A sense of belonging

People would talk about high employment rates and lack of local opportunities as an underlying cause, but that didn’t sit comfortably. I knew it wasn’t the full story. It seemed too simplistic - as if it was overlooking something more fundamental.

Eventually, after many years of wrestling with it, it came into focus. The missing piece was a sense of belonging.

The turning point was discovering new research into the root causes of community-wide mental health issues and what exacerbates them. Everything clicked and I knew it needed to become the centre of my work.

My practice quickly became focused on creating more immersive work, as I knew how powerful it could be. I integrated it with heritage, as this could be effective in building a greater sense of belonging.

I created Hidden Histories of Dumfries and Galloway, which used immersive storytelling and interactive educational tools to animate history where people lived. It allowed them to see surrounding places and spaces in a different way - for example, by learning about day-to-day life from our time travelling, local historic characters and having a chance to learn traditional skills as part of the experience. I saw what this did for boosting peoples’ sense of connection to their locality.

Although we had a lot of success, I was aware there was so much further we could go.

Integrating virtual and augmented reality into these projects felt like the most natural step to take them to the next level. But, as to how to get there, we were drawing a blank. Everything we investigated seemed expensive and inaccessible.

When I first heard about StoryTrails and the work of StoryFutures Academy, it felt like a dream come true. Every part of what they planned represented what I had wanted to manifest in my own practice. Once I found out that David Olusoga and the BFI were involved, I charged headfirst into the project and knew it was exactly what I was looking for.

Taking place online in 15 libraries across the UK, StoryTrails allows people to experience their towns, cities and communities in a new way by using augmented and virtual reality. The stories are brought to life in the places where they happened, using public spaces to create a free experience for anyone.

StoryTrails has allowed me to learn from the pioneers. The real deal, top of the tree, forerunners in innovation in the worlds of TV, film, immersive theatre, gaming and extended reality (XR). We had free training from StoryFutures Academy, the UK’s National Centre for Immersive Storytelling run by Royal Holloway, University of London and the National Film and Television School (NFTS), the team behind StoryTrails.

We’ve been working collaboratively with BAFTA-winning talent, with the likes of Nexus Studios and Niantic, the people behind Pokémon Go. We’ve had exclusive access to the BFI team and their archives. All these partnerships have focused on helping to showcase the hidden histories of my beloved Dumfries.

The technology is ‘bleeding edge’

The technology is so cutting-edge, in fact bleeding edge, that there’s not even a commonality of language for it yet. It’s such a fusion of different tools and concepts that new terminology is surfacing all the time. I even find the glitches exciting. That’s the surest sign we’re working at the forefront of what’s possible.

It all comes down to the ethos of the project and of UNBOXED more generally. This is an experiment in creativity that becomes visceral when you realise that you’re workshopping creative solutions every single day, in this interdisciplinary multidimensional way.

This is the future of storytelling and documentary. Right now, moving image is only in your living room, the cinema or on your phone. But as this technology develops and contextual storytelling evolves and matures, there will be remarkable opportunities to tell stories in ways that bring people closer together and generate a stronger sense of belonging.

I’ve learned how to 3D scan, how to design in a digital 3D world, about gaming mechanics, how users interface with various augmented reality and virtual reality functions, and how to make that kind of work – with storytelling experiences – in local places, with the local community.

The interdisciplinary nature of StoryTrails has given me a set of unique skills that we can utilise here in Dumfries and Galloway to make this type of work with the local community, giving them more opportunities to present and share their individual experiences, while also helping to boost our heritage and tourism sector.

For my contribution to StoryTrails, I was inspired to make a trail about Dumfries’ lesser-known local histories, bringing to life some amazing local women and gender-nonconforming people who have influenced the way we experience the world around us. Their impacts are hidden in plain sight around us, just not widely recognised.

I hope my contribution to StoryTrails will encourage people to think about the impact of women, LGBTQ+ and gender-nonconforming people in our local community – past, present and future – and contribute to aiding people to become their most authentic, empowered selves. Other trails taking place throughout the UK all have a different focus, each telling a unique story, which comes directly from the communities where they take place.

It’s my belief that making this technology accessible to more people in the creative and heritage sectors will better enable local communities to tell their own stories in ways they have never been able to do before – and to feel a greater sense of belonging to the place they call home.

DJ McDowall is a practitioner and consultant in the field of grassroots community engagement.

StoryTrails is commissioned by UNBOXED: Creativity in the UK. It is taking place in 15 towns and cities across the UK and runs until 18 September 2022. Learn more here: unboxed2022.uk/storytrails and story-trails.com.

This article, sponsored and contributed by UNBOXED, is part of a series of articles to showcase the value of creativity and what creativity means.