At a time when the UK is looking to tighten its borders, Julia Grime looks at how German theatre has been welcoming the cultural initiatives and political messages of its growing refugee population. 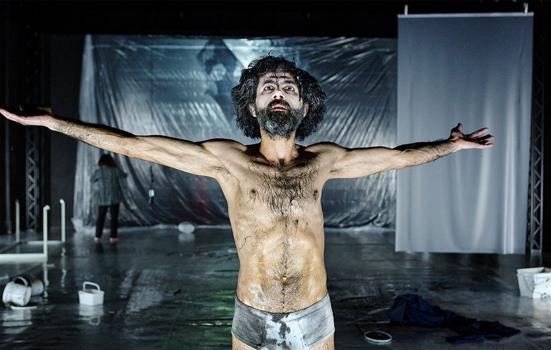 Ya Kebir by Collective Ma’Louba
Photo:

In 2015, in response to increasing numbers of refugees arriving in Europe, Angela Merkel tried to lead by example when she opened Germany’s borders to refugees from wars in Syria, Iraq and Afghanistan, famously declaring: “Wir schaffen das. We can do this.”

What is less well-known is that German theatre, arguably a more directly socio-political beast than most UK theatre, welcomed the million-plus refugees with open-armed, practical help, connecting them with local communities and playing a key role in easing their acceptance into German society.

Theatre made a remarkable contribution to the debate around migration and open borders. As this progressed, the work with, and by, refugees moved away from testimonial and semi-documentary work, based on recent experiences of flight, often with non-refugee directors, towards a ‘post-migrant’ approach.

The work then addressed more universal concerns, with the refugees themselves taking control. This activity extended right across the board, from the state-funded city theatres, through to independent ‘Freie Szene’ companies and on to grassroots organisations.

From the beginning, one of the driving forces was Berlin’s Maxim Gorki Theater. The theatre established the Exil Ensemble, a company of professional actors from the Middle East with a Syrian director and writer. An ‘art asylum’, positioned firmly within the theatre’s core programme, it operates on the premise that “We don’t talk about ‘others’, ‘others’ should speak for themselves”, and has developed a diverse repertoire playing to a broad audience base.

Meanwhile in Munich, Münchner Kammerspiele has created a new identity for the theatre, opening up to all as ‘Munich Welcome Theatre’ with a welcome café, refugee workshops, a cinema club and much more besides, as part of a vision to reinvent theatre as “a laboratory for future urban societies”.

More recently, Theater an der Ruhr in Mülheim is supporting Collective Ma’louba, a company of Syrian exiles that focuses on post-migrant issues, like patriarchy in Arabic society. It is even touring work made in Germany back to the Middle East.

There’s also a number of independent companies and collectives, some long-established. The Boat People Projekt and young refugee collective, Hajusom, have been in operation since the late 1990s (the latter is an initiative of three refugee teenagers in Hamburg). Project-funded but strengthening sustainability through an extended ensemble with their philosophy of ‘each one, teach one’, they make remarkable shows about everyday issues.

Another company, Ruhrorter, mixes European and Arabic cultures – the work of refugees set in the context of semi-forgotten towns of the post-industrial environment of the once-mighty Ruhr area in central Germany.

And there are grassroots companies such as Club Al-Hakawati in Berlin, a group of refugees and others bonded by mutual concerns about equality and human rights, and the importance of mixing rather than subsuming cultures. “It’s about everyone … and every kind of war. I was born here. I’ve always lived in Germany – I never saw bombing – but I saw a racist war, an emotional war, a discrimination war,” said one of its members. “It’s a shitty life but we just want you to know what we’re going through,” added a refugee from Syria. “Nobody gives us our voice, we take it.”

And that’s where things are headed now – opening new perspectives borne out of a deeper understanding of each other. Last summer a meeting, Post-Heimat Encounter#1, established a new network bringing the companies working in this field together, sharing successes and challenges, addressing practical and creative issues. It’s about how to give a voice to the true diversity of society in all its variations, whether cultural, ability-based or social.

German theatre has responded quickly to social change, and it’s been able to do this partly because of how it’s set up and financed. But it’s also about an openness to ensuring an equal voice for all, bringing refugee work, or indeed work by any marginalised group, fully into the mainstream rather than leaving it to hover at the margins.

And on a practical level, the semi-devised, post-dramatic approach, so prevalent in German theatre, makes it easier to mix cultures and include diverse influences as the shows develop. In a redefinition of the key roles in a creative team, a cultural mediator role has evolved to facilitate better translation in terms of cultural mores as well as language. This has helped reach more audiences, to explore common concerns from different perspectives.

Sure, we already know much of this stuff, but at a time when the UK is looking to tighten its borders - along with whatever else emerges from the Brexit process - and when the huge global issues we all face are building up, it’s a timely reminder of the need to reinforce our common humanity and the role that the arts can play in this. Ultimately, Germany’s post-migrant theatre isn’t just about refugees. It’s about all of us.

Julia Grime was Theatr Clwyd’s General Manager before moving to Germany to work on a British Council project.
https://outoftheblackbox.co.uk