A different kind of dialogue

Approaches to assessing cultural value are stuck in a financially reductionist ‘value = money’ orbit. We should be examining people’s experiences of culture, and the meaning that comes from those experiences, says Julian Meyrick. 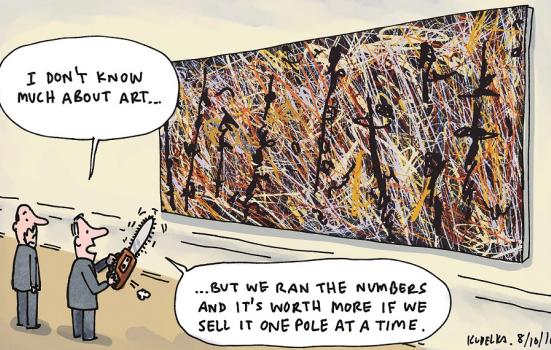 It’s worth thinking about the difference between a valued car and a valued friend. What aspect of the term ‘value’ might they share? The first is a manufactured item, supplied by a commercial provider, sold on a market according to a price x quantity algorithm. The second isn’t.

Audiences, readers and visitors are limited to the role of consumers, expressing their opinions through one thing only – purchasing power

The danger is that in a society that values cars over friends, or more precisely, the methods used to value commodities over those used to value people, what goes out of the window is the infinitely richer and more personal sense of this important word.

Since the 1980s, the debate about the worth of culture has been stuck in a financially reductionist value = money orbit. This is true no matter what part of the sector you turn to – the traditional performing arts, contemporary digital media or quasi-intellectual events like festivals for ideas and writers. Through it all, the shoddy verities of metrical thinking and the obsession with numeric performance indicators persists, as if numbers alone are enough to guarantee something is worth doing. If the figures are going up, it must be good.

Confused forces are driving the current metric madness, and governments in the UK, the US and Australia appear to have gone barking mad in more or less the same fashion. It seems obvious to say it, but in arts and culture at least: no meaning = no value.

It may not be true of boots, bread and billiard balls, but it is absolutely true for books, film and music. Using a system of indicators or index for ranking creativity or quality according to some weird numerical schema bears the same relation to culture that phrenology does to true science. In that sense, cultural policy-making resembles a drunk stumbling round a hedge maze with their eyes bandaged.

It is time to scotch the idea that it is possible to evaluate arts and culture without knowing anything about them. Measures of value have not only become arcane, but increasingly nonsensical.

The problems of understanding value in arts and culture are considerable. Reflecting on our own cultural experience and considering what is actually of value in it is a good place to start. This has a personal dimension to it, but not a limitlessly subjective one.

Returning to the binary valuing cars/valuing friends, cultural experiences are probably somewhere in the middle. Or maybe they shift around, at times discardable and easily replaced, at others singularly affecting and uniquely transformative.

This dynamic inconsistency presents problems, but points to the most important driver of all measures of value – our human sense of it.

In the four years that Laboratory Adelaide, based at Flinders University in Adelaide, Australia, has been investigating evaluation processes as they are faced by artists and arts organisations in the field, one thing has become clear: the problem of value has been forced out of its natural place in a critical and social dialogue and turned into a matter for measurement experts.

In this way, artists and arts organisations lose their voice in public discussion about the worth of what they do, while audiences, readers and visitors are limited to the role of consumers, expressing their opinions through one thing only – purchasing power.

Nearly 40 years on, this trajectory has had a maddening effect on those who work in the sector, blinded governments to the real potential of the arts, and wasted millions on misplaced exercises to demonstrate the value of culture without properly engaging with it.

In the so-called ‘value debate’ it is important to accept that real change is hard, that repositioning arts and culture in such a way that a more grounded, thoughtful and meaningful discussion about their worth by all stakeholders – governments, the public, artists and arts organisations themselves – will take both time and effort.

There are, however, ways forward. Two alternative reporting frameworks that are currently revolutionising the way value is assessed in the corporate sector are the Global Reporting Initiative (GRI/sustainability reporting) and Integrated Reporting (<IR>). GRI is of particular interest to environmentalists, because of its capacity to account for non-renewable resources and broad stakeholder impact, while <IR> is an assessment tool sensitive to long-term impacts and intangible capitals.

Both of them might be adapted for culture and offer a different kind of conversation at the official level. Emerging as they do from the problems of evaluating on the one hand the natural world, and on the other IT and intellectual property, they show promise as frameworks suited to the needs of the cultural sector.

Attitudes to the future that presume more of the same now seem patently unconvincing. When we began our research in 2014, our only aim was to contribute to the way artists, cultural organisations and governments talk about what they do, and to extend the policy conversation beyond a limited creative industries vocabulary. But strange things started to happen both in Australia and beyond to arts and culture in the form of Australia’s erratic Federal Arts Minister George Brandis, and to a seemingly settled world order in the form of Brexit and Trump.

Yet still we meet people who believe the only way forward is data-driven reports and arguments about investment return. Not only should this change, it is changing, as the consensus about the universal benefits of the free market breaks up among economists, accountants and politicians.

It is time for everyone who cares about arts and culture to get out of the brace position and come alive to a dialogue about their inherent value.

Julian is the author, together with Robert Phiddian and Tully Barnett, of What Matters? – Talking Value in Australian Culture, to be reviewed in AP shortly.

Australia and the arts during Covid
A different kind of dialogue

“Only a fool or a knave” trusts quality metrics, say academics