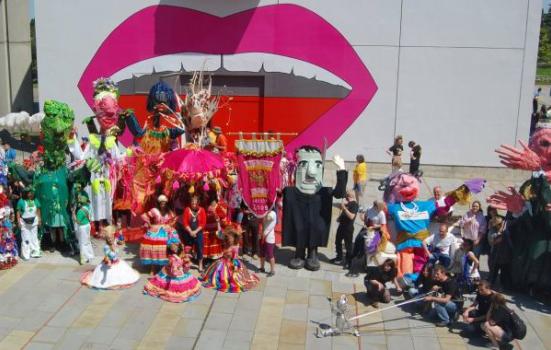 A Festive Road event, specialists in outdoor arts and carnivals

The Milton Keynes Catalyst Arts programme was one of 62 consortia supported through Arts Council England’s (ACE) Catalyst Arts: Building fundraising capacity fund. The two-year programme (2013-15) aimed to increase capacity and expertise in fundraising and improve the resilience of six arts organisations: Festive Road, Independent Cinema Milton Keynes, Inter-Action MK, Islamic Arts Heritage and Culture, Arts and Heritage Alliance Milton Keynes and Milton Keynes Festival Fringe. All had been involved in the 2012 Summer of Culture celebrations and were selected to participate in the Catalyst programme based on their potential to develop and grow. These are small arts organisations heavily dependent on volunteers but all play an important role in engaging the city’s diverse population in quality arts activities.

The programme has provided the organisations with the incentive, time and space to focus on the important aspects of organisational development and fundraising

Milton Keynes Council led the programme, acknowledging the challenges the sector faces with reducing public sector funds. As Lucy Bedford, its Arts Officer explains: “We are keen to support the arts sector by offering them the tools to become a stronger and more resilient collective, which Catalyst enabled us to do.” Consultants Abigail Branagan and Diana Hatton were appointed to develop and manage the programme in 2013, and I was appointed to evaluate the programme in November 2014.

At the start, the lack of capacity and fundraising expertise within the six organisations meant a number of them were in serious danger of closing. However, following the two-year programme the organisations are moving towards greater sustainability. They have made considerable changes to their management structures, improved governance, developed fundraising skills and strategies and trialled new ways of fundraising and generating income. The process has meant taking radical and difficult decisions. MK Catalyst was developed from the standpoint that organisations need a clear vision and strong governance in order to develop appropriate and effective fundraising activities. As the national interim evaluation of Catalyst identifies (BOP Consulting in March 2015), clarity of vision and mission is one of the “primary enablers of positive change for arts organisations” seeking to diversify their funding and increase support from private donors.

Audits of each of the MK Catalyst organisations, carried out at the start of the programme, identified the specific needs of the partners and from these a bespoke programme of training and mentoring was planned. Organisations were linked with mentors to support them on particular development and fundraising issues. For example, Festive Road and Festival Fringe were supported with bid writing and board development by consultant Debbie Read. Islamic Arts Heritage and Culture was mentored by Sukhy Johal from Nottingham New Arts Exchange. The training programme included sessions on board development, how to communicate what your organisation does, approaching trusts and foundations, sponsorship, crowdfunding, making the most of your website, using social media and dealing with growth. As part of the wider ambition to share the learning beyond the six core participants, the presentations and resources from the training sessions can be downloaded from AHA-MK website and are a useful resource for all small arts organisations.

The peer-to-peer learning and support was a central element and real trust was built between the core partners. Regular meetings were held alongside the training and mentoring to reflect on the learning and collectively problem-solve. As one of the partners explains: “It is hard to imagine where we would be without Catalyst and particularly without the support from our peers and the consultants who acted as critical friends.”

A buy-back element had been built into the programme to support the participation of unpaid or freelance staff. As the majority of those involved had been instrumental in setting up the organisations, they put in many more hours than the buy-back paid for, as they were committed to seeing their organisations secure a more stable future. Aside from the challenge of finding the time, the organisations had to overcome a number of hurdles to move their organisations on. The transition to more robust governance and management structures has not been easy and there were concerns that changes in governance might force the organisations to move away from their core values. However, with the training for directors and trustees plus one-to-one mentoring, all now realise that greater accountability and strategic planning are a necessary part of growth and that bringing new people to the board can bring additional skills in fundraising, marketing, PR and financial and business planning.

Communicating key messages was another core theme running throughout the training. Having worked on their vision papers and developed short ‘elevator pitches’, which were repeatedly practised, the participants are now much more confident talking about the value of their work and asking for support. They are also clear that asking for support is not just about asking for money. Having the confidence to join the local chamber of commerce has paid off for one of the Catalyst partners. It has identified an interim chair from the corporate sector who is helping with recruiting a new board and setting up new management structures and processes. Another Catalyst partner has a new director and new board member that have had to take some challenging decisions about the direction of the organisation, with support and facilitation from Catalyst consultants.

All the organisations have made practical changes to their websites and social media platforms as a result of the training. One organisation also successfully trialled a crowdfunding campaign, achieving 50% above its admittedly quite modest target. All the organisations now understand what is needed to run an effective social media campaign but still need time to bring all their contacts together in one place to make the most of any campaign.

The programme has provided the organisations with the incentive, time and space to focus on the important aspects of organisational development and fundraising. However, there is still an issue with time and capacity to fully implement the learning from Catalyst. While all the organisations have increased their annual funding since the start of the project, and with a new strategic direction there is a strong base from which to expect further increases and more diverse funding to come, they are still very small arts organisations with few paid staff.

The Catalyst partners, Milton Keynes Council and the wider arts and heritage sector are keen to build on this positive experience, and options are being explored for extending the programme to take the six partners to the next stage of development and provide a forum through which they can share their learning with others.