Placing data-scientists-in-residence in arts organisations has led to some futuristic tools that are of real use. Cimeon Ellerton reveals the details. 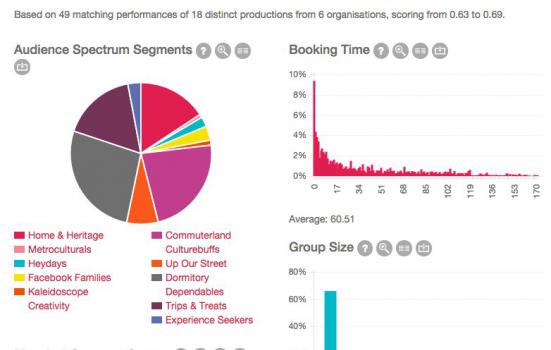 The Audience Predictor tool in action

On occasion, working with data in the cultural sector feels a little like being on the set of Tomorrow’s World circa 1984. For every new ‘game-changing’ announcement, very little seems to impact on the day-to-day lives of those with the responsibility of growing audiences. This has meant that data has become a particularly loaded word. It has moved out of the shadows as a purely technical term used mostly by computer scientists, researchers and academics, and has entered the vernacular of everyday business, but still comes with a high level of distrust when you have to set and meet audience targets.

This is not data analysis for the sake of it, but tools that finally make a difference at a practical level

So talk of data-driven decision-making is often greeted with a mix of bemusement, indifference or even horror. Despite this, there is a hunger across the sector to create tools that deliver not only real insight into audiences but also take the bold move to answer the questions that we continually ask ourselves. We in the arts need to have foresight and belief to commit ourselves to reaching into our data worlds and take the small step that turns into the giant leap.

Recently, Arts Data Impact, an initiative supported by the Digital R&D Fund for the Arts, introduced the first ever ‘data scientists for the arts’ in residence to three large arts organisations – the National Theatre, English National Opera (ENO) and the Barbican. They were responsible for encouraging staff across the organisation to recognise and use the data resources available to them. From this a range of opportunities were identified as potential prototypes for data tools, of which three were selected by the three organisations and one by us.

The National Theatre is committed to expanding the reach of its work and is always looking for better ways to widen the world of theatre and its effect on diverse audiences. It helped to develop ‘Sonar beta’ so that it could understand theatre audiences beyond the knowledge gained from box-office data. Sonar was designed to overcome specific barriers to the use of Twitter data by highlighting theatre-goers’ wider interests in addition to specific conversations around theatre, the National Theatre and emerging theatre (and talent). Topics are detected and a word cloud of most used keywords is presented. Tweets that fall within each of the groups can be explored further using time and keyword filters, or downloaded, therefore identifying common themes.

ENO wanted to focus on audience segmentation and so worked on developing ‘Audience Explorer’, which provides an engaging overview showing arts attendance of a specific audience segment, using our Audience Spectrum segmentation tool. Its power is in moving beyond simple generalisations about segment types to specific information about how a segment behaves in the real world, placing real tactical decision-making power in the hands of the user. This kind of powerful data storytelling is made possible through data-sharing in Audience Finder. Time and again, we have found that the first step to encourage senior managers to engage with data is to develop a common language internally across an organisation, whatever the size. Audience Explorer helps all staff at ENO to understand their audiences better in a way that would not be possible simply by analysing the ENO’s own booker database.

The Barbican developed ‘Support Predictor’, which identifies bookers who are likely to buy a membership and recommends which particular level of membership to offer. This sort of predictive analysis is rarely brought to bear in the arts and this is the first automated tool of its kind. The tool currently focuses on membership schemes but could be expanded to predict donations and loyalty in general.

One of the most exciting developments to come out of the project is ‘Audience Predictor’. It allows you to predict who will buy for a production before the first actor has even been cast. Imagine if before a single word has been committed to a script, you could have a clear understanding of target market, average ticket price and even what day of the week people are most likely to book. How is this even possible? By searching through the performances stored in Audience Finder, the tool finds those that are most similar in terms of the specified characteristics. This then follows all the audience members of the closest performances and these are used to predict characteristics of an audience for the hypothetical planned performance. Put simply, you will be able to set clearer targets, develop better strategic plans and more rigorous budgeting than was previously thought possible.

By aiming high, these four new developments, which have emerged over a relatively short period of time, allow organisations to make that step change from informed and experience-led guess work to data-driven decision-making that actually makes a real deliverable difference. This is not data analysis for the sake of it, but tools that finally make a difference at a practical level. The future really is here. We are committed to developing new tools that help the sector take data-driven decision-making to the next level and continue to work with a data scientist in residence.

Cimeon Ellerton is Head of Programmes at The Audience Agency.
www.theaudienceagency.org

This article, sponsored and contributed by the The Audience Agency, is in a series sharing insights into the audiences for arts and culture.