In celebration of a continent

Kwame Bakoji-Hume explains how sharing knowledge of African culture through school workshops can shine a light on important contemporary issues. 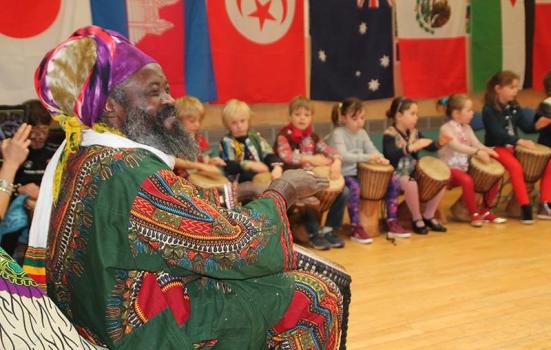 If we had reached the mountaintop of Martin Luther King’s dreams, maybe we could all just be humans and ‘not see colour’. But this is not our reality. Black children in schools rarely see role models represented in the history they learn, and when they do, the role is often that of the victim. White children in some areas never have the chance to meet an adult of colour, let alone be taught by one.

African Activities CIC is a collective of African artists sharing African arts with schools and community groups across the UK with the aim of deepening an understanding of African culture and history.

We believe that when teaching arts and culture, context is everything, and that an artform cut adrift from its roots is a story half-told

Many of our schools workshops use drumming, and I would like to stress that it is not ‘traditional’ drumming. It is a diverse and vibrant artform that has evolved and taken on modern twists, just like any other. The Anglo Ga of the Volta region in Ghana have a particularly vibrant version, including some funky dances. But drumming does indeed provide a link with the past, and is a means of preserving oral history. We are lucky to have griots (the storytellers who are the keepers of this oral tradition) leading our workshops for us.

Children learn about many aspects of African culture. Our energetic drumming sessions include movement and song as we explore the history of the drums and their modern-day significance. Or a workshop might focus on the dances of the Ewe people to tell the stories of migration from modern-day Nigeria, through Togo and Benin and into Ghana where they have currently settled.

Storytelling practitioners could equally take students on a journey back to the dawn of time itself in the rift valley, or wandering through the chill of modern-day London as the Windrush generation disembarked for the first time. In our textile workshops children might stamp and print cloths using the symbols of the Ashanti people, which represent proverbs and are a fantastic way to explore and understand their history. And in our recycling workshops children turn milk bottles into masks inspired by those used by the Dogon, Fon, Ashanti and Gonga ethnic groups.

Through activities like this, we tell tales of long ago of kings and queens, regiments of female warriors, gold and riches, knowledge and compassion. From Zimbabwe in the south, which traded with China before Europe had civilisation, to the north and the birthplace of universities in thirteenth-century Timbuktu. Africa is full of surprises.

We question why people learn about William Wilberforce before the abolitionist campaigner Olaudah Equiano, or Yaa Asantewa, the Ashanti queen mother who led a war against British colonialism. Why would people contend that the pyramids were more likely to be completed by aliens than by Africans? Why would black history in Europe begin with slavery and the Windrush and not with black Roman emperors such as Septimus Severus?

We believe that when teaching arts and culture, context is everything, and that an artform cut adrift from its roots is a story half-told. History is context and all our workshops, from music to art and drama, have firm roots. Using music to carry our stories enables us to share our histories in the way they have always been told. It’s fun and accessible for all children, enabling us to engage with a range of abilities and introduce challenging and sometimes difficult concepts.

Many children, for example, may not have considered concerns about using the word ‘slave’. While people may have been enslaved, they never became slaves – they remained people no matter how oppressed they were.

In an inner city, multi-ethnic school, tensions between those of differing heritage are still very real. A sore this deep is not one that heals hidden in the dark, where it festers and putrefies. For us, learning about African history and culture is about addressing this inequity and reclaiming the past for all of us.

We know history is not always comfortable. One of the most powerful Ashanti symbols is ‘Sankofa’, literally translating as ‘go back and get it’. It means that it is never a sin to look back at our history and to use this to inform our future decisions and our path. We choose unity, but we will never get there pretending it was always this way. By shining a light on history we hope we can create a more unified future.

In celebration of a continent