As part of a fundraising strategy donation boxes consistently fail to fulfil their potential, but does it have to be this way? Bernard Ross explains what’s going wrong – and the research exploring how to put it right. 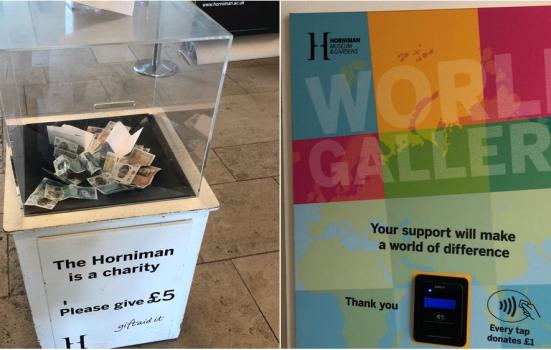 Horniman Museum: collection boxes were updated, but only ask for £1

A lot of flawed thinking and anecdotes underpin so called ‘best practice’ in arts fundraising today. That's why the National Arts Fundraising School, with support from Ogilvy Consulting and Arts Council England, has set up the world’s largest field experiment in arts and culture fundraising www.decisionscience.org.uk. This involves testing various approaches to fundraising over six months in real situations as part of a randomised control trial, to establish what really works and how well. One of the techniques we’re testing is donation boxes – both physical and electronic.

Are donation boxes a simple and easy way to fundraise? Do they give audiences and visitors a chance to make a gift to support your work? Well yes, if properly placed, designed and nurtured, but as currently used they suffer from five problems.

Frankly, it’s hard to tell how much cash donation boxes do produce. None of the ten arts agencies I approached informally in my initial research was willing to declare how much they gained from their box. But I know from other research that boxes in smaller museums often produce as little as £20 a week. And contactless – often seen as the next big thing – doesn’t necessarily produce more.

In one large gallery in north west England, the contactless approach produced even less that the donation box – an average of £28 a month, compared to £78 from static boxes. And when the mighty Science Museum had donation boxes, only 20% of the 4 million visitors met the very modest suggested donation of £5, which raised the grand total of just £110,000 a year. When the museum changed its approach to one based on more scientific principles, its income rose to £1.4m a year. Science works.

According to their last annual report, Tate’s four sites attracted 8.4 million visitors last year, but I’d be surprised if they got much more than £200,000 from their boxes. That works out at less than 2.5p per visitor. Take a look at their very cool and artwork-y donation box. It doesn’t look very full. Just to be clear, I’m not singling out Tate. This is, however, a criticism of major institutions which, despite having the footfall to drive large donation levels, produce really poor results. 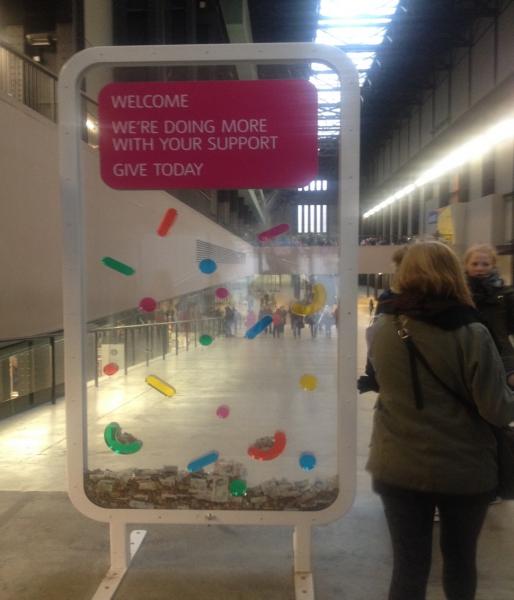 The problem with donation boxes is that people have to switch from what Nobel Prize-winning decision scientist Daniel Kahneman calls System Two – asking rationally ‘is it worth it?’– to System One – asking emotionally ‘how do I feel about this organisation and its work?’

One of the key things we now know from research carried out into System One and Two is that if you stimulate System Two in people by asking them to pay for something, and then ask them for a donation, the philanthropic System One driver is reduced. This is the problem with asking someone for a donation immediately after they have bought a ticket.

For most visitors, it feels a little weird that just after they’ve paid to enter a venue, they are confronted by a box seeking an additional donation, often telling them ‘we’re a registered charity’, as if those magical words will cast a Harry Potter style ‘donatiamus’ spell. The theory is that people will give more if they know arts organisations are charities. But is that true? Is that really the barrier?

Or is the answer to add a fixed ‘voluntary’ donation, as the Tower of London and many theatres do? What the science tells us is that by fixing the amount, we introduce a small restricted system two calculation but reduce the desire to make a gift. So you may get an extra £10 on top of the ticket price, but miss out on the chance for much greater gifts.

For those who don’t charge to enter, the location of the donation box seems to be a pretty random matter. But a box should be in one of two places: either before you enter, to say ‘please make a donation… before you’ve had the experience’ or on exit, when you’ve enjoyed the experience and should be feeling most positive.

In our experiment we’re testing both approaches, but for the moment a good choice is to place mini-boxes beside specific sections. We worked with one famous museum and suggested they have boxes around the museum at key points with signage: “you could help to preserve this manuscript” and “you could fill this education room with children.” Income goes up at these touchpoints and we’re testing this more widely now.

Aside from an almost universal use of Perspex, the most common design feature of a donation box is a hole to put money in. My guess is that the Perspex is meant to ‘normalise’ giving, say, £5 – so the clue we give visitors is to put lots of £5 notes in the box. This would probably be a good move if it was well executed, as the science tells us that people like to do what others do. So if we see people putting money in a box, or see that many others have done it, we will follow suit. However, what most boxes show visually – as Tate’s box shows – is the unpopularity of giving. Most boxes are empty.

You can make a box look better as in the example from the Horniman Museum (top of page) showing before and after. ‘Tap to donate’ offers a slightly different opportunity, but notice that the gift has defaulted to a mere £1. So this electronic box may be easier to use, but it’s still not asking for a lot of money… in fact less than a cup of coffee in the café. Maybe we don’t believe enough in our cause.

My final complaint is the biggest one. Collection boxes represent the very old school view that a donor is just a source of money. And nothing else. It sends out the message, ‘You make a donation, but I don’t really care who you are or why you gave. I mostly can’t even be bothered to give you a personal thank you.’ The visitor or event attendee is treated as a provider of cash that you need and want, and the box is a way to get that cash. When they have given money, the transaction is over. That’s not a relationship.

Some organisations try to make the donation tax efficient through gift aid, which involves collecting more information. With that comes an opportunity to communicate more, but sadly even collecting this process is deeply transactional.

I love St Martin-in-the-Fields in London – both their fantastic classical music series and their terrific social work. But when they ask me for money to put in a box, there’s nothing about what they do with the money, or how I’m helping… or even how grateful they are. It’s all about the tax. I filled in my last envelope having been moved by Handel’s Messiah. It was a great time to tap into my positive feelings. But below is what I was confronted with. 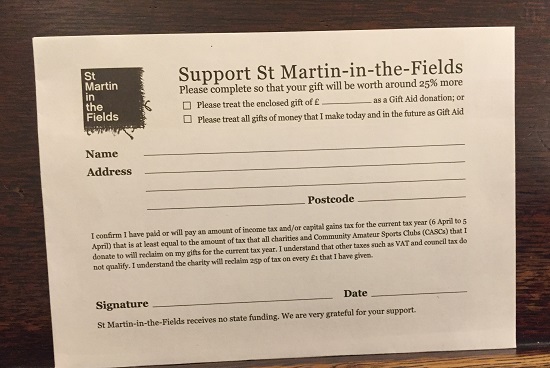 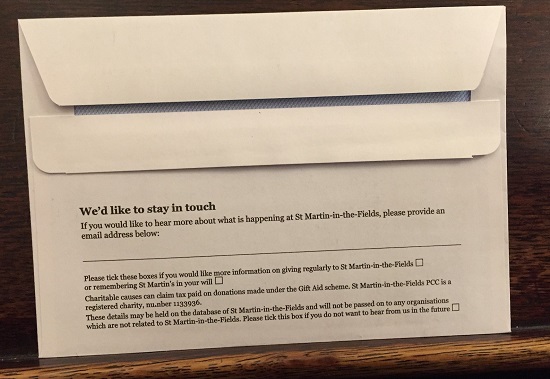 This kind of writing is so antipathetic to everything we say we’re trying to do about building relationships. If you’re thinking about the person filling in the envelope or putting money in the box as a potential long-term supporter, then you’ll want to get to know them and to nurture their giving. Given a choice of someone’s email address or a £5 donation, I’d take the email every time. Because I’m sure over time I could encourage people to give more AND engage them in other ways.

To keep in touch with the decision science project, register for updates.

Interactive, in terms of making something happen - can be attractive. A good toymaker can have great fun making something where coins set off movement - light - colour - sound etc. on a relevant theme to the collection or institution's purpose...? Simple psychology; - give some immediate gratification...repeat behaviour can follow if you make it 'sexy/fun/clever' enough! (Find a local company, to sponsor the maker?)