An immersive theatre performance lasted 13 hours – the time it took to fly from Heathrow to New York via Iceland. Kate Hargreaves tells the story. 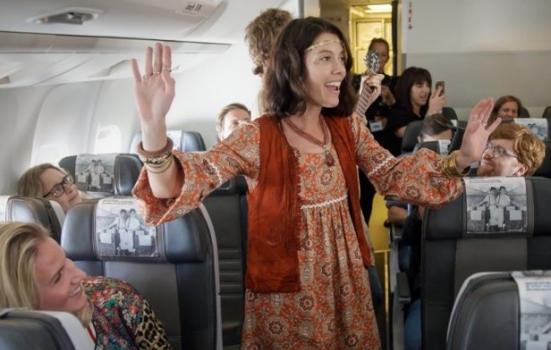 Icelandair’s past 80 years provided the inspiration for the narrative. We invented an 80-year-old heroine and her family who embodied some of the defining eras from 1937 to now. They featured in episodes that connected to the airline’s history and the changing face of air travel. Woven in were aspects of Icelandic history and culture, past and present, including the lives of the airline staff that we worked with. The airline is proud of its staff and the Icelandic people are proud of their society and progressive attitudes. They’ve got an enviable history of firsts: the first elected female head of state, the women’s strikes in the 1970s and the first all-female crewed flight.

Some passengers told us afterwards how they expected to be cynical about it all, but they were swept along

There were 18 non-professional performers from Icelandair in the cast who we enrolled in ‘Stage School’ in Reykjavik during the summer. Working with them was a great pleasure as they were open, fun and talented.

Gideon Reeling makes original and bespoke entertainment, much of it site-specific. We’ve made theatre in some ridiculous places such as lifts, toilets and vans, but also in city streets, fields and festivals. Our work is often durational too – theatre that rolls on for many hours – it’s part scripted and part improvised, so we were confident that this project was possible.

Theatre has been performed for airlines before, but it was clear from the outset that the in-flight bit was to be one of our lesser challenges. Working in airports, such fluid and heavily regulated environments, gave us none of the usual controls that as theatre makers we hope to have over performance spaces. Every inch of an airport falls under the jurisdiction of one of many different agencies. The airline’s representative at Heathrow was incredible but it was a massive logistical challenge.

Our work is interactive so audiences are not passive observers but in the midst of the action, both as witnesses or participants. We had members of the press offering to write a tale for our heroine’s birthday and one passenger, who had forgotten to take his usual Valium dose, dealt with his in-flight nerves by becoming a character in the show.

However, being thrust into a theatre show for 13 hours can be bit much, even for the most ardent theatre-goer. So we sought mechanisms to prevent saturating the passengers with performance. To this end, we trialled the mobile app ‘Boxez’, created at Goldsmiths University, as an alternative way to deliver some of the content.

Some passengers told us afterwards how they expected to be cynical about it all, but they were swept along, many of them inventing tales and personas of their own. They quickly grasped that the more they participated the more they learnt. We believe it’s important to connect to people, draw them in and allow them to participate in stories and share their own. And maybe it encourages a wider engagement with the stories of others and an increased willingness to play in real life.