A unique organisation that works in the rural communities of Somerset has expanded its horizons to Europe. Ralph Lister shares the story. 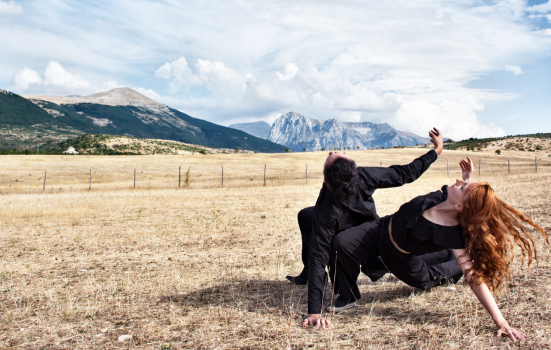 Curiosity, creative thinking, risk taking, open-mindedness, persistence… and money have been central to Take Art’s journey into Europe - one that started several years ago and has paid off many times over in the richness of experiences.

The journey starts on a farm, down a track in rural Somerset; the home of Take Art, a pioneering arts charity that lives in the village halls, churches, fields, recreation grounds, schools and nurseries scattered across the county, home to 500,000, half of whom live in its rural hinterland.

We have run a rural touring programme since the late 1980s, were one of the National Rural Touring Forum (NRTF) founder members in 1997 and, more recently, a key partner in the Rural Touring Dance Initiative. Formerly, I was chair and then Development Director of NRTF and have advised on the Arts Council England’s Rural Evidence & Data Reviews.

Statistics from the most recent Review in 2019, show that only 37 NPOs have a rural postcode which together account for just 2.5% of the total NPO budget. The rural population is 17.6%. This imbalance is mirrored in Europe, where one third of population lives in a rural settlement and yet cultural policy and investment has a predominantly metropolitan focus.

The success of the UK’s rural touring model - and the NRTF as advocate for the sector - coupled with my enthusiasm to work with European counterparts led me to initiate a European equivalent, albeit one shaped to the cultural sensibilities of each partner country: SPARSE (Supporting & Promoting the Arts in Rural Settlements of Europe).

Since 2018, SPARSE, co-funded by the Creative Europe programme of the European Commission, has been led by Take Art in association with other companies in the UK and in Estonia, Italy, Lithuania, Romania, Norway and Sweden.*

The premise was simple: to provide rural communities with access to high quality performances. We did this by supporting partners to develop their own rural touring networks, providing them with mentoring support, sharing our expertise, building confidence with both them and their local rural promoters.

There were three annual tours, the last of which was completed in November 2021. We created a digital presence and produced a short film, a series of rural touring toolkits customised to each partner country and an evaluation report, all to be published imminently.

Our own version of family

SPARSE has striven to work in an environmentally sustainable way. Because of this, we were invited to contribute to a publication addressing the European Commission’s strategic priorities: environmental sustainability, gender equality and digitalisation.

The project has been a joyful and emotional experience. Some examples: a Romanian partner, from the Hungarian minority in Transylvania, was delighted to hear Bartok played at a village show in Cornwall. And when visiting the Italian region of Marche, affected by an earthquake in 2016, I witnessed the distress of local promoters and their village communities.

When in late 2021, we convened the final face to face partner meeting in Ancona, Italy, it was wonderful to see each other for the first time in over 18 months. We’re not just colleagues, we’ve constituted our own version of family, enjoying each other’s company, while jointly invested in the success of the whole partnership.

The differing cultural sensibilities and characteristics each partner has brought have enriched my life enormously. I have never felt more connected to Europe.

Projects in the pipeline

SPARSE introduced Take Art into the bloodstream of European cultural programmes; through it we were invited to become a partner in a Horizon 2020 Rural Regeneration project, Ruritage which continues until August 2022.

We are also working with Crying Out Loud on a Perform Europe project, funded by Creative Europe. It’s a research project exploring sustainable touring options in Europe and, as part of it, the two companies will give 24 performances in 10 countries during 2022.

We have also created SPARSE network of 16 members from 12 countries, currently developing a follow up SPARSE Plus proposal. If successful, this 4-year project will build on successes to date.

Persistence has been essential to our success. It’s taken years to build the necessary European relationships. So has risk taking. Our adventure, initially was an act of faith, creating a new way of working in a European context which had no precedent.

These characteristics will be even more critical for those wishing to remain engaged with Europe. As an optimist. I trust the importance of cultural relations with our continental colleagues, and the lifeblood it provides for our sector, will be recognised and a cultural trading relationship will be restored.

Taking art to rural Europe
How can rural voices be heard?
Rebalancing funding for rural arts
Working together