This week is the anniversary of the Universal Declaration of Human Rights. To mark the occasion, the UK arts sector launched Fly The Flag in 2018. Kate McGrath shares what has been achieved. 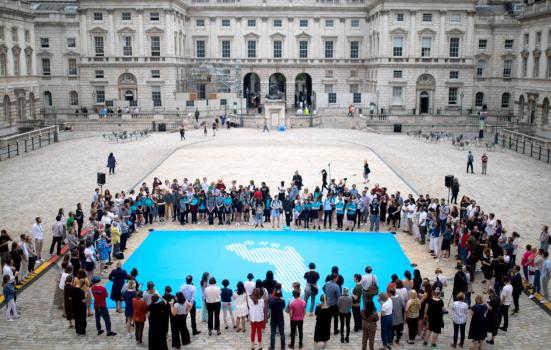 Fly The Flag is a unique collaboration between arts organisations and human rights charities celebrating the human rights we all share. We launched in 2018 on the 70th anniversary of the Universal Declaration of Human Rights (UDHR), commissioning the artist and activist Ai Weiwei to design a flag as the symbol of the campaign.

The UDHR was proclaimed in 1948 in response to the global atrocities of war in the first half of the 20th century. It was a milestone document, drafted by representatives from all over the world. Fly The Flag - a reminder of the human rights we are all entitled to – is a five-year project which aims to raise awareness and understanding of human rights in the UK, particularly amongst young people.

The founding partners first gathered in 2017, driven by a shared impulse to celebrate, advance and protect the ideals and realities of universal human rights in the UK. In 2018, we launched Fly The Flag with Ai Weiwei’s flag and a joint statement from our human rights partners explaining that “the need for our hard-won, anchored system of legal protections for human rights is more vital than ever, yet that system is under severe threat”.

Human rights for everyone, every day

Since launching, hundreds of creative events and projects have been programmed, enabling children and young people to explore and understand human rights. The flag is central to the campaign and continues to be flown in recognition, celebration and defence of our human rights.

Each year we invite the people to fly the flag for human rights on 10 December, Human Rights Day. From the Highlands of Scotland to the coast of Cornwall via cities, towns and villages across the UK, in galleries and theatres, shopping centres and offices, schools and libraries, both physically and online, people come together to celebrate and remember that human rights are for everyone, every day.

Freedom of expression is a human right

This UK-wide engagement programme is produced by Fuel in partnership with Eden Court Highlands, Sadler’s Wells, Wales Millennium Centre and The MAC in association with Belfast International Arts Festival.

Each organisation is working with young people in their area whose need to assert their right to freedom of expression is particularly urgent, including working class young people, LGBTQ young people and young people with specific access needs.

This process will culminate with the release of a new film created by young people across the four nations of the UK, which will be broadcast by Sky Arts on 10 December, Human Rights Day.

In addition to the films, new resources for schools, both primary and secondary, are being made available for free so young people can find out more about freedom of opinion and expression as human right.

Young people who have taken part in Fly The Flag have been inspired and inspiring in their engagement with human rights, finding their way in to the ideas expressed in the Universal Declaration through creativity.

As one participant put it: “I think art shows the truth that sometimes words can’t. It reveals things that we tend to avoid and tend to not want to talk about. It forces you to face what’s really happening.”

We’ve seen first-hand how powerful it can be for young people to spend time with each other finding out about human rights and giving artistic expression to their responses to these ideas.

Whether through spoken word responses to Article 25 last year, or through choreographic responses to Article 19 this year, the young people flying the flag have created personal and political expressions of why human rights matter to them and to us all. Their feedback has been universally positive, and the legacy of this work continues.

The Universal Declaration of Human Rights is just that - universal - but our focus will remain in the UK where human rights so urgently need to be more widely recognised and understood. The project culminates in the 75th anniversary of the UDHR in 2023.

In the coming two years, Fly The Flag will continue to work as a unique partnership with one aim: to enable young people across the UK to know and protect their rights.

Kate McGrath is Director and CEO of Fuel and founding co-producer of Fly the Flag.

Flying the flag
Our Gurus