75 years of Arts Council and the amateur arts

As he reflects on Arts Council England’s 75th anniversary, Robin Simpson thinks it’s not unfair to say it has never quite known what to do about the amateur arts. 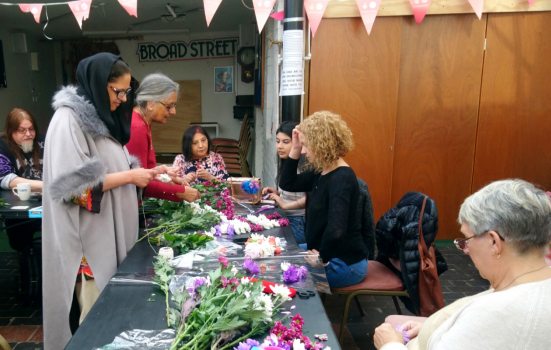 Research commissioned by DCMS and ACE in 2008 - Our Creative Talent - revealed that there are 49,140 formally constituted amateur arts groups in England, regularly involving 9.4 million people.

In 2006/07 these groups put on 710,000 performances or exhibitions which attracted 159 million attendances. They provide the bulk of the opportunities for people across England to participate in arts and cultural activities, yet the amateur arts often feels like the bit of the iceberg below the water.

The terms of reference that the Arts Council's predecessor, the Council for the Encouragement of Music and the Arts, set for itself in 1940 included "the encouragement of play-acting and music-making by the people themselves".

But the Arts Council generally resisted direct support of amateur activities, having taken a policy decision to devote the funds at its disposal to support the professional arts. In 1951, its Secretary General characterised the Arts Council’s mission as growing "few, but roses".

“I do not speak for amateur theatricals”

There’s a story (which may be apocryphal, but I am trying my best to perpetuate it) that after the new Arts Council of Great Britain was granted its Royal Charter in 1946, they discovered the document was slightly too big for the glass frame bought to display it. In order to fit the Royal Charter into the frame the bottom section, which referred to the Arts Council’s role in encouraging access and participation in the arts, was folded over and hidden from sight for many years.

Addressing the House of Lords in 1972, the Chairman of the Arts Council of Great Britain, Lord Goodman, famously said: "We are concerned with the Arts. This business about amateur theatricals, the crafts and the like, is something about which one needs to be very sceptical indeed ... I speak for the Arts; I do not speak for amateur theatricals."

Despite this, the Arts Council has actually provided significant levels of indirect help to amateurs. For example, for many years substantial funds were channelled to amateur music groups through the National Federation of Music Societies - though, interestingly, this funding was primarily intended to enable amateur groups to pay professional musicians to support them.

What should be the relationship between ACE and the amateur arts?

Much of this responsibility was devolved to the Regional Arts Boards in the mid-1980s as a result of The Glory of the Garden - a ten-year strategy to ensure a more equitable distribution of arts funding across every region of the country. But by the time I started working for the National Federation of Music Societies (now known as Making Music) in 1999, most of this regular funding to amateur music groups was in the process of being withdrawn.

Amateur arts groups are now largely self-financing, usually through a mixture of membership subscriptions, box office income, donations and fundraising. As the vast majority of amateur groups exist without any public funding, what relationship should ACE have with them? As ACE seeks to position itself as "the national development agency for creativity and culture" how could it work better to promote all creativity and culture, not just that which it happens to fund?

Since I became Chief Executive of the Voluntary Arts Network (now known as Creative Lives) in 2005, there have been three significant developments in the relationship between Arts Council England and the amateur arts.

Firstly, adoption of the phrase 'everyday creativity' has helped us to distinguish people taking part in creative cultural activity in their everyday lives - with their friends and families, in their local communities - from people taking part in participatory arts activity led by a professional artist. Both are important but for many years our conversations with the Arts Council about participation may have confused the two.

Secondly, the growing acceptance of the concept of a cultural ecology or ecosystem - championed in particular by the Warwick Commission on the future of cultural value in 2015 - has enabled us to focus on the complementary role that everyday creativity plays alongside professional, subsidised and commercial culture.

Thirdly, a rapidly increasing research base clearly demonstrates the wellbeing effects of everyday creativity. Those of us who choose to spend time and money pursuing amateur creative activities have always known implicitly that we do it because it makes our lives better. Now we have the evidence to prove this. And clarifying the link between everyday creativity and wellbeing makes the case for equitable support for the infrastructure needed to allow this activity to thrive, across the country.

ACE's Let's Create strategy recognises these three developments and points out that the Arts Council has come a long way since "few, but roses", saying "With this Strategy, we hope to prepare the ground for a blossoming of creativity across the country – and to acknowledge that the surest way to fill the future with every variety of flower is to recognise that we can all be gardeners".

What more could ACE do to promote the amateur arts?

Over the past 30 years Creative Lives (formerly Voluntary Arts) has been promoting what we now call everyday creativity and speaking on behalf of the amateur arts. We welcome the shift in direction outlined in Let's Create and look forward to working with ACE towards this blossoming of creativity across the country as outlined in our recent report Common Ground: Rewilding the Garden.

We think ACE could do more to support everyday creativity in the following ways:
•    Creative People - campaigns to encourage more people to take part (building on the Get Creative campaign which Creative Lives has managed in partnership with BBC Arts, ACE and others since 2015).

•    Creative Communities - help amateur arts groups develop their activities through occasional micro-grant schemes and support the local cultural infrastructure (particularly in the context of the multiple challenges currently facing local authorities) to ensure there are available and affordable spaces and facilities for everyday creativity.

After 75 years it feels like there is now a real opportunity to realise the potential of the amateur arts.

This article is an advertising feature sponsored and contributed by Creative Lives.