Embracing the art of the possible

The theatre industry needed a champion in a time of crisis. National Theatre Scotland answered the call and it’s not turning back, writes Jackie Wylie. 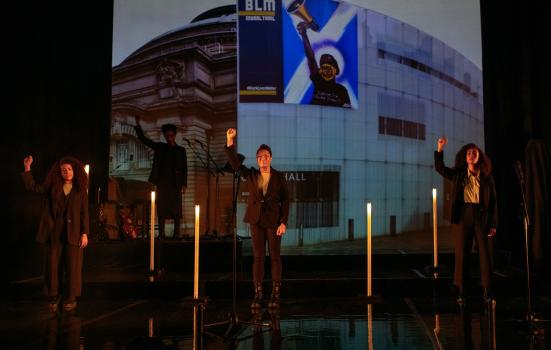 It was mid-March and I had only been back from maternity leave for a few weeks. We were busy with three shows, preparations for a national tour and other productions in development, including one for the Edinburgh International Festival. Then the world changed.

If anyone told me then that theatres would close for a year or that we would have shifted our entire way of working, I would have found it hard to believe them. But that’s exactly what we’ve done, forging a digital path that achieved 17 million audience views.

On March 23, we closed our rehearsal and technical centre and took to our kitchen tables, living rooms and home offices. The week before we had announced that none of our 2020 programme would go ahead as planned, but all contracted artists and freelancers would be paid. We needed to reassure a community in crisis that we were going to do all we could to look out for them.

I knew that National Theatre Scotland (NTS) needed to shift quickly. We are the largest theatre organisation in Scotland, our ‘theatre without walls’ model means responding to the challenges of time, place and form, with urgent work, is at the heart of what we do. We felt an enormous sense of responsibility to artists, freelancers and audiences who would face unprecedented struggles over the coming months.

Decisions were swiftly made to create a crisis-responsive digital project, ‘Scenes for Survival’, to employ as many performers and writers as possible. The project was also conceived to support a stricken Scottish theatre sector and raise money for a hardship fund. Children and families out of schools needed a lifeline, which we provided through ‘Play Dates’, a programme of online entertainment and education, delivered in partnership with Imaginate. Our commitment to the LGBTI+ community of elders that met monthly through our Coming Back Out Ball social dance club programme continued as we migrated the sessions online. By the end of the year our digital output included a weekly music and poetry stream, a festive online show filmed in Stirling Castle, two albums of new music, a stream of the play Lament for Sheku Bayoh and special film ‘Ghost Light’ for Edinburgh International Festival’s reimagined digital festival.

When the pandemic hit, the reality of so much work being cancelled meant that we also were able to draw upon an extraordinary wealth of Scottish talent.

Those artists who could afford to sacrificed their fees so others could be paid. Formalities, hierarchies and silos were demolished in an instant. Anyone we called instantly understood what we were trying to do and wanted to help.

Partnerships are key. Without a building of its own everything that NTS does must happen through cooperation of one kind or another.

Leaders from Scottish theatre venues and organisations came together quickly from the start. The sector in Scotland is a networked community that believe that we are only as strong as the sum of our parts. We share the common aim of wanting to support individuals and communities whose livelihoods and buildings were are at risk.

Collaboration is an art in itself. It takes years of practice – and failure – to learn to be flexible, generous and empathetic while holding on to your core principles, especially in challenging times.

We have always been digitally curious and driven to venture into new artistic territory to explore.hybrid art forms. We already had strong convictions about the power of broadcast media to reach new audiences and found an ideal partner to deliver over 50 Scenes for Survival: BBC Scotland. Together we worked on an innovative distribution plan, across social media, iPlayer and TV, which resulted in millions of views across these platforms.

We did what we knew should be done to support the sector and continue to connect with our audience and then planned into that conviction in order to make it happen at speed. We had to fundamentally rethink our processes, from how we make decisions to how we put together creative teams. We constantly interrogated ourselves. Who is included? Who isn’t? And created open calls to engage with artists and performers across Scotland.

We learnt by trying and experimenting. We underestimated how hard it would be for actors to self-produce from home. Many were simultaneously caring for others or dealing with family illness and bereavement. We had to ensure as much work as possible was accessible for d/Deaf and disabled audiences. A balance had to be struck between featuring high profile artists who would help with audience reach and platforming theatre artists of all career levels. We also had to respond to other seismic cultural shifts. Nothing was more important than The the Black Lives Matter movement and we had to take the vital and time-critical path to becoming an anti-racist organisation.

The challenges were endless – and ongoing. We must remain advocates and allies for a sector facing harsh realities and work in true partnership in order to survive and grow.

It’s been nine months since the first lockdown and we have changed.

All that was achieved was down to the attitude and unwavering commitment, organisation-wide. Our ethos of ‘working without walls’ means redefining theatre with every new production. This feels like an ongoing embrace of the art of the possible. One of the key jobs of an arts leader is to ask, “Can this be done?”. At NTS, the answer is almost always “Yes”.

Our belief that we can and should be a theatre for everyone in Scotland has never been stronger. Everyone has experienced this moment in time differently. Our work needs to be more impactful than it ever has been and to offer solace, joy and hope more than ever before. We need to embrace our huge responsibility to innovate and become fit for purpose in these strange new times.

There are words and concepts that all of us use, almost in the abstract, to describe the purpose of theatre making. We use these explanations in funding applications, opening night speeches and team meetings. But when we saw how Scenes for Survival was received by audiences – the comfort it provided to a nation in grief and shock – we gained a new understanding of the solace we were offering. Now, it is this that drives us forward.

Jackie Wylie is Artistic Director and CEO of National Theatre of Scotland.

Embracing the art of the possible