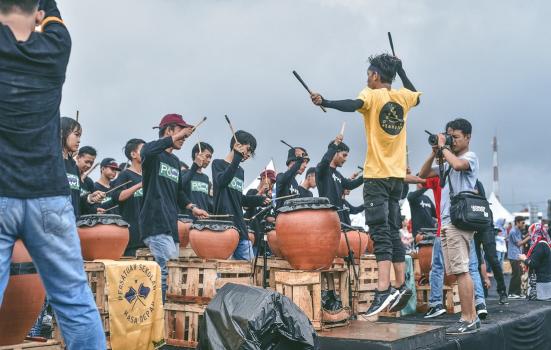 Arts Council England’s new strategy, Let’s Create, sets out a new direction for the arts and a challenge to most of the sector. Building on the initiatives like Creative People and Places, Fun Palaces and others, it implies a radical shift in perceptions and a blurring of the lines between artist, audience and community.

Now, as we start to imagine a post-pandemic cultural sector, there’s a chorus of voices urging us to ‘build back better’, calling for institutions to genuinely value artists and freelancers and respond to their needs, and for the cultural sector to reflect the communities it claims to serve. Ultimately, this is question of power: the arts sector still comprises a small number of very powerful people, and a large number of very powerless people, and its top-down structures perpetuate that.

In May, I noticed a tweet by Matt Fenton, Artistic Director and CEO of Contact, the theatre in Manchester devoted to young people: “Can we take collective approaches out of the rehearsal room & apply them to running institutions (buildings & funding models)? It’s time for systemic change”.

And I thought to myself: that already happens in Indonesia.

Can we take these collective approaches out of the rehearsal room & apply them to running institutions (buildings & funding models)? It’s time for systemic change.. https://t.co/RFLvDNWrHQ

Most of Indonesia’s key arts organisations would call themselves collectives. These emerged partly from a longstanding cultural norm known as gotong royong, which is variously translated as ‘working together’ or ‘helping each other’. Across many aspects of life Indonesia is still an instinctively collectivist society: according to the 2019 Legatum Prosperity Index Indonesia ranked first in the world for civic and social participation.

But the collectives were also a response to decades of corrupt, authoritarian government in the latter part of the 20th century and the years of unpredictable, unreliable government ever since. As Farid Rakun of Jakarta-based collective Ruangrupa told me, “In a failed-state context, there’s no mainstream: so it gives us an opportunity to say this is how we believe stuff should be”.

Indonesia’s collectives argue they recognise everyone’s value and respect whatever resources they can bring to the table: knowledge, space, money, skills, networks, community links. By pooling resources and offering an equality of status, they mostly feel that they’re better equipped to handle a crisis: more sustainable, inherently flexible, and better able to respond to fast-changing circumstances, whether they be economic meltdowns, global pandemics or simply the whims of governments.

In the city of Yogyakarta, they’ve taken resource-sharing to another level. The Commons Credit Cooperarativa sees six different arts collectives exchanging skills and expertise via a credits system: a collective of collectives.

For Jatiwangi Art Factory (JAF) the approach of Let’s Create would sound familiar. Jatiwangi is a small town known mostly for its ceramic industry. For decades it produced the roof tiles that were used across Indonesia and JAF’s work engages with the changing industrial and social landscape of the town. According to Ismal Muntaha, based there since 2009, JAF is “not working for the community, it is part of the community”. The vibe is that of an extended family: everyone lives together, eats together, creates together.

UK artist George Clark has been to Indonesia twice in the last three years and has forged an ongoing relationship with JAF. He was fascinated by what he saw as a horizontal structure rather than the hierarchical structure present in the UK. This structure isn’t just about decision-making – although Ismal tells me that when decisions are needed, they are usually made collectively – it’s about a fluid way of working: “artists need to be community organisers, cooks, carpenters... and those skills are not held hierarchically”. Or as Yuki Aditya of Jakarta-based collective Forum Lenteng told me, “everyone’s job description is something fluid, where everyone can fill any position depending on the needs of the program or of other people”.

For George, this felt natural, efficient and productive, and a contrast to the dominant competitive ethic in the UK. “Art schools (in the UK) emphasise individual expression, that’s the way you are set against your peers. The proliferation of competitions and awards works against ideas of working together”.

JAF see art as one part of a wider relationship with their community: they’re as likely to be found planting chilis as making videos and that helps build a relationship of trust. One of JAF’s projects is a triennial event called Rampak Genteng, which involves the community playing musical instruments made out of clay. The last time it happened, in November 2018, 11,000 people took part.

All the Indonesian collectives I spoke to for this article mentioned nongkrong as an important factor in their process. Usually, if imperfectly, translated as ‘hanging out’, the culture of nongkrong is central to the creative process and to the creation of organisations, plans and strategies as much as works of art. Nongkrong often lasts for several hours, with no prior agenda. For most arts collectives it’s a default approach to making, with everyone invited to join. It creates an environment where, as George Clark says of JAF, “a lot of work gets done, but it doesn’t feel like work”.

This isn’t about being unproductive, but it is about valuing creative process more than any particular ‘outcome’. And it does tend to mean that the notion of ‘authorship’ is less important than the opportunity to be creative: when ideas emerge from a large group of people, no one gets to be possessive about them.

Andreas Siagian from Yogyakarta-based collective Lifepatch described the process as ngoprek, or ‘tinkering’. As Ipung, one of Surabaya’s WAFT Lab collective, says: “I joined because of their nongkrong approach. We have to have meaning in life, that is our vision; we are not focused on results, but on process”.

When decisions need to be made, Indonesian arts collectives mostly achieve consensus via nongkrong. For Ruangrupa, important decisions come to the majelis, or assembly. As Farid tells me, “everyone from the most experienced artist to the janitor can join the majelis and propose subjects. And decisions made there need to be respected by everyone.”

Regardless of the term used to describe the process, it clearly works. Ruangrupa is not a small arts group: it is responsible for some of Jakarta’s biggest events and, in 2022, it will be the first collective to curate Documenta, the iconic five-yearly exhibition in Kassel, Germany.

Can it work in the UK?

I talked to Matt Fenton about the Indonesian context and how it relates to his aspirations for systemic change.

Contact is one of the few large arts organisations in the UK that builds participatory decision-making into all its processes. It is aiming for 50% of the Board to be aged 18-30 and young people are involved in all programming and staffing decisions. Matt says that involvement behind the scenes translates to audience enthusiasm: “Data from Creative People and Places really backs up the data from Contact - the people who are involved in decision making and governance then become the audience. They’re no longer ‘hard to reach’.”

But Contact’s approach is a rare one and, as Matt freely admits, it’s only a “halfway house” between a traditional theatre and a collective. The theatre is just down the road from where the Rochdale Pioneers created the modern co-operative movement in the 1840s. Can we imagine a viable major UK arts organisation being totally owned and run by its community?

“A lot of turkeys would have to vote for Christmas”, says Matt. “But our funding models are also quite risk averse. And the press shore up this hierarchical model: the programme gets hung on me as ‘my vision’, and it’s not. As Artistic Director, I chair a conversation where lots of voices bring things to the mix and I’m a small part of that mix. But the industry puts it all on me. Even if you try and avoid the hierarchical, the context piles it back on you.”

The cultural sector’s been fetishising leadership for years: but the great challenges of our time are not about individual leaders. They’re about developing a culture that springs from communities rather than being imposed on them; that allows the time to play, to tinker; and that decentralises power so that artists, communities and workers feel they have a genuine say.

Indonesia’s cultural sector is a long way from perfect, its government support is haphazard at best, and in many ways it is looking to learn from best practice in the UK. But at a time when hierarchies are finally being challenged, when the creativity of communities is finally being prioritised, there’s plenty to learn from a place where arts organisations are built around a culture of gotong royong: helping each other.

What a great model - and one that shows it can work and thrive. It enables people to be part of something - and therefore feel open to being creative and enjoying the arts. I can only hope the powers that be are brave and see how this approach can not only create great work for all to enjoy, but also put arts at the heart of a community - and not be an add on.

Time to challenge the hierarchies
We don’t celebrate alcoholism, so why are we thanking Lottery players?