What happens when you put communities in charge of their own creative projects? Ryan Herman found out how residents, rather than local politicians, are making their communities better places to live. 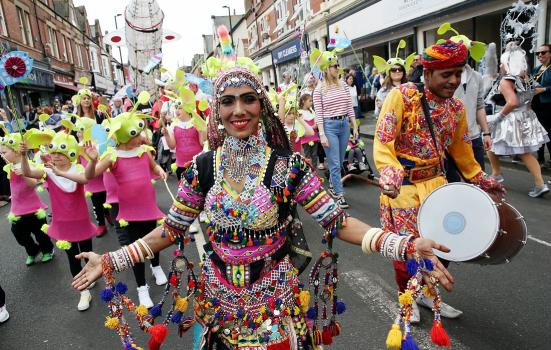 When Arts Council England’s 10-year strategy was published in January, its chair Sir Nicholas Serota wrote, “Understanding of the role of culture in building and sustaining communities has come into clear focus and will sit at the heart of our work over the decade to come.”

For the people behind the Creative Civic Change programme (CCC), what started off as an experiment, when it was launched in May 2019, suddenly felt like it was at the vanguard of a new way of funding and thinking about the arts.

CCC is a partnership between Local Trust, the National Lottery Community Fund, the Calouste Gulbenkian Foundation and the Esmée Fairbairn Foundation.

It supports 15 projects across England from carnival organisers in Whitley Bay to community builders in Plymouth, with an open brief of using arts and creativity as a catalyst for meaningful civic change.

CCC was inspired by Big Local, a radical funding model set up in 2012, where 150 areas across England were each given £1.1m from the National Lottery Community Fund. These areas are neighbourhoods that had historically missed out on investment. But the money came with a caveat; residents, rather than local politicians, decide how it should be spent to make their communities better places to live.

Big Local partnerships have supported all sorts of projects from restoring a medieval tower in Cresswell, Northumbria to installing a 4.2 megawatt wind turbine in Lawrence Weston, Bristol.

“Local Trust wanted to see if the Big Local model could fit into other contexts,” says Grace Bremner, Programme Coordinator for CCC. “At the same time, the Calouste Gulbenkian Foundation was embarking on its Inquiry into the Role of Civic Arts. As funders, we had a great opportunity to come together to learn about different ways of funding community-led creativity.”

She adds, “We’re seeing it as a pilot programme. We want to find out what happens when you put communities in charge of creative projects in their area. That feels particularly disruptive in an arts context when traditionally this type of funding has been very short-term, project-based, and top-down.

“We received 270 ‘expressions of interest’, which asked applicants to explain who you are, what is your community like, how you want to use creativity, and what sort of change do you want to make? We didn’t ask for budgeted plans, outcomes or legacy statement. We tried to go for a broad geographical spread (of projects), although there wasn't a quota.”

Each project can receive up to £200,000 over three years, although communities are actively encouraged to apply for other external grants.

“They had six months with us, with support and some funding to develop their ideas,” says Bremner. “So often with the funding process, that time isn’t paid for. You can spend months developing project plans that may never receive a penny.

“We don’t focus on the outputs, we focus on the process. One thing we’ve learned is you can’t fund or start these projects with a set outcome in mind.”

Even if deadlines had been set in stone, they would have been bulldozed by Covid.

Bremner adds, “Lockdown has revealed to a lot of people how important the arts are. We’ve turned to artists to entertain us, to support our wellbeing. At the same time, the arts is one of the most disproportionately affected industries – so much activity ground to a halt.

“This is where the dispersed leadership at the heart of the Creative Civic Change programme comes into its own. By putting resources, responsibility, and trust directly to communities, many CCC areas have been able to deliver fantastic creative work whilst arts organisations have been on furlough.”

One of the projects is Hard Times Require Furious Dancing, which has brought together Birchfield and Welsh House Farm, two communities in Birmingham that are six miles apart. The idea is for people of all ages to experience art in ways they wouldn’t have otherwise thought possible.

Hard Times is being documented by Vanley Burke. Often referred to as ‘The Godfather of Black British Photography’, Burke lives on Birchfield’s doorstep and has also been mentoring a group of residents.

He says, “For me, working with people within the community and teaching them how to use their camera is always of interest. The idea is that they can construct, compose, and take a good photograph, to document their own lives and pass it on to the next generation. But I also hope this will bring about a greater understanding of each other’s lives.”

In Hanley, Stoke-On-Trent, the Portland Inn Project will see the site of a former pub transformed into an arts centre.

Rebecca Davies is co-lead on the project and explains, “We’ve got a community decision-making panel that involves residents, partners across the city and the local council. And they really steer our programme. It takes years to build an organisation like this because it takes years to build trust. We’re in an area where a lot of promises have been made but were never delivered.”

CCC is keen to share its experiences around what works, and doesn’t work, when it comes to supporting community arts. But, right now, it wants to inspire communities like Hanley, Birchfield, Welsh House Farm, Corby, Blackwell and Whitley Bay to take ownership, take risks and be creative at a time when many people may otherwise feel powerless in the face of Covid.

As Davies puts it, “There is a wonderful quote from the author Rebecca Solnit, ‘Inside the word "emergency" is "emerge"; from an emergency new things come forth. The old certainties are crumbling fast, but danger and possibility are sisters.’”

Ryan Herman is a Journalist-At-Large for Local Trust