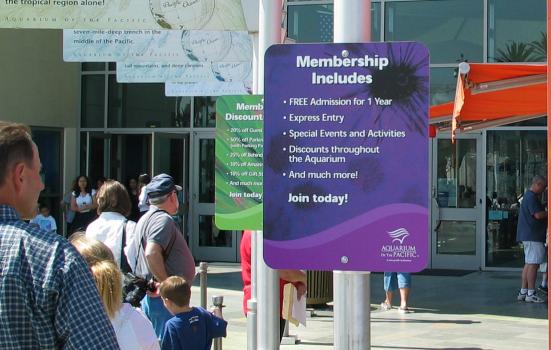 When Steve Jobs launched Apple’s campaign Think Different in 1997, he had just embarked upon a mammoth undertaking to turn around the company he had founded, which was no longer fit for purpose. Turn around the company he did, and today Apple bears no resemblance to what it was in the mid-90s. It both anticipated and dominated the digital revolution that ensued.

Today, our cultural institutions are facing a similar crisis. For many charitable institutions - including museums, galleries, theatres and performing arts venues – this crisis is existential. Trends that were already underway, affecting the way we work, live and consume, are dramatically accelerating and will force a realignment of business models for this sector. If we want to save cultural institutions, it’s time to think different again now.

The pandemic, combined with the changes in the way people interact with art, will have a deep impact on business models in the cultural sector. More than any other sector, the arts sector is thinly capitalised and therefore less able to overcome the current economic meltdown than most. Even with the significant government support announced this week, many institutions will be teetering on the brink. Small and medium-sized institutions are not going to survive it alone.

This means the cultural sector needs radical change in its approach to both income and costs.

For income, it is worth looking at other industries to gather some insights. Cultural institutions have been releasing a huge amount of content online for free, which has been amazing. However, it is not sustainable in the long term – and not just for these institutions. It’s not sustainable for the artists themselves, or for the many freelancers who support the creation of content and who need to earn a living.

Considering the challenges faced by the online media over the past decade is instructive. The media have had to consider the challenge of paywalls vs. advertising to create a sustainable revenue model. The Financial Times and The New York Times, banking on the promise of uncompromising quality, have succeeded in creating a business model supported by paying members. Other outlets have elected the online advertising revenue model in order to remain free of charge. These models offer options for the cultural sector to consider.

Allowing advertising in a gallery might feel like killing a sacred cow, but what if it allows it to provide beautiful art for free? Or just to remain solvent?

Working hand-in-hand with this more commercial approach to content must be a strong focus on membership and individual fundraising. In order to preserve our cultural capital for future generations, we need to involve our audiences and stakeholders into our fight for survival.

Curating highly valuable content and focusing on building strong audiences through sustainable memberships is the new imperative for cultural institutions.

Membership is integral to moving from one-time ‘gate income’ to recurring income, and to weathering the ups and downs of seasonality. This requires a solid programme and a purposeful institution, as well as the ability to create a strong community of users. Today, museums offer memberships at £70 / per year or thereabout for unlimited access. But how about a much smaller charge, levied weekly or monthly, of the sort that disappears from your bank statement and therefore keeps going for many years?

Institutions could also contemplate some more aggressive member-acquisition techniques which are commonplace in the commercial world: a three-month free trial, the first year at 50% off, on the back of which one then captures data, tracks usage, and hopefully acquires a new member. Such a strategy would require a solid customer relationship management system to keep track of members and their habits, and to encourage them to deepen their relationship with the institution in question, but this is now standard for running any business today.

Related to this is individual fundraising. Peer-to-peer fundraising and crowdfunding have been around for a few years and are now being adopted at scale, powered by social media platforms. Specialist platforms like Just Giving help fundraise with all privacy and fiduciary safeguards in place.

Facebook and Twitter can give a formidable reach to individuals and amplify messages so in theory, it’s never been easier to fundraise. The power of online fundraising has been powerfully demonstrated by Captain Tom Moore’s staggering fundraising success for the NHS during Covid 19. Bernie Sanders raised far more than any other Democratic candidates for President through small donations, even before holding any major fundraisers were held.

Could these examples herald an era in arts funding in which many individuals support a cause that matters to them, rather than the traditional handful of major philanthropists giving millions to a relatively smaller number of grantees? This could work effectively together with a strategy to develop a much closer relationship between institutions and their communities.

But what about the thorny cost side of the equation? Cultural institutions tend to be relatively small institutions compared to most businesses. Their main competencies lie in artistic production, curation, conservation, and collecting. But each institution, small, medium or large, runs a back-office operation including IT, Human Resources, bookings office and facilities management, amongst others. Due to the lack of scale and budget, small and medium institutions perform these functions imperfectly, with insufficient resources and expertise.

There is an opportunity for the sector to find a way to pool resources and purchasing power to access to better services. How could we provide small- and medium-sized institutions with better expertise at an affordable cost while letting them focus on their primary artistic pursuit? Could we see mergers and acquisitions in the sector, where larger institutions absorb smaller ones who cannot survive on their own?

I think this is unlikely. However, the recommendations in the Civic University report for the UPP Foundations give an interesting framework for this rethink. It talks about the role of local anchor institutions, local councils, mayors of combined authorities, businesses, cultural and community organisations joining forces to create new local ecosystems. And this could work hand in hand with a rethink of how culture is funded by national and local government. Allocations of funding could be geared towards this joined up operating system, rather than spread through small grants across a myriad of smaller institutions.

Perhaps a new way forward could be a mutualisation of business functions which would allow smaller cultural institutions to buy into larger expert and resilient systems, with highly qualified staff working across several institutions.

Covid-19 has only accelerated what was bound to happen in the arts world: the collapse of unsustainable economic models. It’s time to evolve or die. Let’s be creative and brave to rethink our models in culture now.

Alice Black is Cultural Ambassador in the Mayor of London’s Cultural Leadership Board, an Observer on behalf of the GLA for the Museum of London Project, and a member of the British Library Advisory Committee. Until January 2020 she was co-Director of the Design Museum.