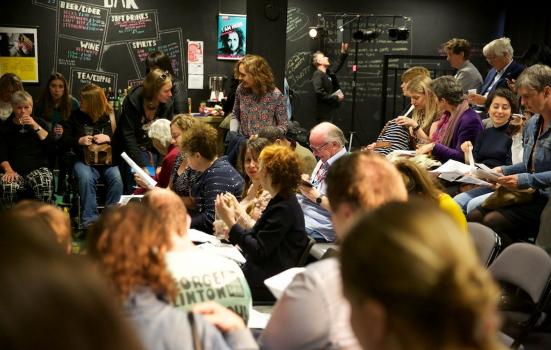 Shop Front Theatre is exactly that – a theatre in an empty shop. Formerly a fish and chip shop, it sits on a corner plot, three up from Iceland and opposite Argos in an arcade in Coventry.

The theatre was born when, after touring as the small-scale company Theatre Absolute since 1993, writer Chris O’Connell and I approached the local council in 2009 to ask them to give us a space “…like a pop-up theatre but longer than six weeks so we can see if anyone will come”, we said. I fronted it out with the Commercial Properties Manager and his imposing team, thinking the worst that can happen is that he can say ‘No’. I guess he somehow felt the same hunch that we did, that the request was worth a go - especially given that the recession meant there was a large proportion of empty shops in Coventry at that time.

We didn’t have a plan as such - we just knew that our time spent touring across the country for one or two nights here and there meant that, although there were some wonderful moments, we were starting to feel a real disconnect with our audience. We grew tired of the pressure of trying to ‘fit’ work to the funding schemes and with those who held the power to say 'Yes'. With the Shop Front Theatre, we instinctively knew that when someone pushed the door open, peeked in at the window or hovered by a poster outside, it was (and still is) either Chris or me who would say hello and begin a conversation.

We talk about what we’re currently rehearsing or, depending on the visitor, perhaps the memories of the space being a chippy or the bike shop, or we ask what they might like to see or what they like doing. Where we can, if it’s an enquiry about starting out in theatre, say as a young actor or perhaps an older writer, we encourage and signpost to schemes and events that we’re either running ourselves or collaborating with partner organisations in Coventry.

Although there are always demands on our time with running a space, the exchanges we have at the door of the shop is something we will never stop doing. They mean that over time, our audience keeps growing and changing. Whether people are here to see a show or attend a writing workshop we’ve programmed, or to engage in one of the many activities created by others who use the space for their own work, there's a constant flow of arts and community organisations, individual artists and makers.

Of course, there are limitations to the shop front. More heating would be great (it’s currently freezing as there was little need for heat when it had the fat fryers!) but the space has so many possibilities and a sense of liberty. It’s a safe space, a place for conversations - meaningful or just everyday chit chat. It’s a theatre lab, a ‘living room’ in the city centre, or as someone once said to us, a ‘Go on, try it out’ place. Its flexibility means it can become what you want it to be and its hire structure is priced so it’s affordable for the one-offs - the experiments, scratches and failures.

Given the nature of how we are funded (we’re not salaried and work on a project to project basis) there are many ideas or proposals that we can’t possibly realise. But over time we feel our performances and activities in the shop have been responsive and relevant to the times we live in and our community.

Our last programme of work Are We Where We Are? commissioned 15 writers and artists, and the response from audiences and artists was incredibly rewarding. After seeing a show for the first time, someone wrote and sent us a poem, so we created a poetry competition and chalked up entries on the shop pillars for people to read, which brought new people into the shop. We’re currently working on a project called Humanistan which asks artists based locally and further afield to respond to a provocation about our common humanity.

Encouraging others is a key objective for us and since being at the shop front we have established a successful writing scheme. During 2019 we worked with the City of Culture 2021 team to develop the programme into City Voices, running workshops across the city.

We support emerging artists (whatever age), we mentor writers and producers. We connect with other independent and mainstream spaces and actively support people who want to create their own events, whether that be arts or non-arts related. We’ve come to understand that both can and should co-exist in the shop front and that’s a healthy environment for us all. The various uses of the space often overlap with each other. An organisation called Underground Lights, for example, run creative cafes each Wednesday morning for people experiencing homelessness. They have their own key and members have now started to attend Theatre Absolute shows. They stay and talk to other attenders, and in turn people hear about their work.

The idea of creating a theatre inside a shop was designed to provoke conversation about what a civic theatre looks like and challenge the top down hierarchical systems that enable unequal distribution of resource and opportunity. I know from my own experience that challenging hierarchy in all its forms is achingly slow, and very often an isolating process. Time and energy are needed in heaps. Arts Council England’s new 10-year strategy ‘Let’s Create’ has just been released. I’m hoping this leads to a lateral shift in the flow of resources and funds so that more performances, moments, and events can happen in social clubs and market halls. Maybe a few more Shop Front Theatres can emerge too.