The project-to-project style of artists’ work makes it difficult for them to claim welfare benefits so the Irish government has taken action to help. It’s a small step forward, says Eoghan Carrick. 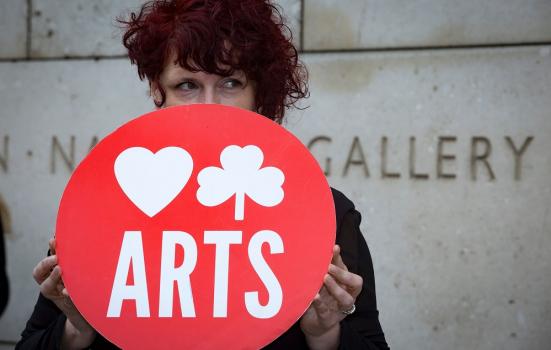 Artists in many countries live hand-to-mouth, project to project, commission to commission, and Ireland is no exception. A 2010 survey conducted by the National Campaign for the Arts (NCFA) indicated that 40% of artists in Ireland were earning under €10,000 a year and less than quarter earned between €10,000-€20,000.

Nothing much had changed by January 2018 when Theatre Forum released its Payscales Survey.  This showed 33% of artists and creative practitioners earned less than the National Minimum Wage; 81% of roles were offered on a temporary basis with irregular hours or on a freelance basis; and 74% of respondents relied on other sources of income.

It was in this economic landscape that a pilot scheme was set up to help address the problems self-employed artists faced with the Job Seekers Welfare system. A pilot artist welfare scheme was launched in June 2017 under the Creative Ireland programme, specifically for writers and visual artists who were either members of the Irish Writer’s Centre (IWC) or Visual Arts Ireland (VAI).

To claim benefits under the previous system, unemployed artists had to submit regular proof they were seeking gainful employment and attend training courses to boost their chances of employment. Just to sustain a living, artists were often taking several part-time jobs with flexible hours and were losing focus on their own professional development. The system neither accounted for the project-to-project style of artists’ work nor made allowances for the unpaid or poorly paid opportunities that many early career artists use to develop their practice and portfolio.

The artist welfare scheme allowed participants to focus on their artistic output for up to a year without having to engage in the regular meetings, courses and training. In order to apply they had to satisfy the qualifying conditions and a means test. They had to be registered as self-employed with the Irish Revenue Commissioners with at least 50% of their income derived from their art in the previous year, and they had to provide a certificate from their professional body as to their status as a professional artist. More than 100 visual artists and writers took part.

It was hard not to see the benefits of supporting artists and following the pilot review, the NCFA and the other panelists recommended it should be made permanent and extended to include other artistic disciplines. An independent validation process was established to certify artists’ professional credentials and, as part of the 2019 budget, the scheme was expanded to support a broad range of creative artists.

The wider arts sector has generally welcomed the initiative as it is creating a little breathing space for artists to develop their practice. It also goes some small way toward recognising the often uncertain and infrequent income artists make, especially in early years, and their important contribution to the culture of the country. Feedback from participants was generally positive and analysis showed that over 87% of the artists who subsequently progressed from the artist welfare scheme did so within the first year.

There has been some criticism though. Artists are required to be unemployed and as such are without income for nine weeks before being able to take advantage of the artist welfare scheme. It is also viewed as a less than robust version of international schemes such as that of the Netherlands, which focuses on the sustainability of those working in the sector by guaranteeing practising artists a basic income for up to four years within a ten-year period.

The NCFA has cautiously welcomed the scheme for supporting struggling artists, but it is not addressing the wider issue of gross underfunding to the arts sector in Ireland. The most recent Eurostat figures show Ireland is still at the bottom of the table on cultural spend, a position sadly maintained now for a prolonged period.

The NCFA is also concerned that much of the new Government cultural investment through Project Ireland 2040 and Global Ireland is focused on capital projects and promotion, with little investment going to artists and their work. The Arts Council of Ireland and Culture Ireland are the only two bodies that administer funding directly to artists, arts workers and the organisations that fund and support them year-round. Poor funding of these two bodies impacts directly on the artists.

Following the most recent budget and the publication of the spend going to artists, Angela Dorgan, chair of the NCFA, made the point clearly: “These are people’s wages, their rent, their food, their petrol, their kids’ school uniforms. Those who work in the arts, work in the arts. We sell Ireland as a place bursting with artists and writers, creativity and fresh thinking, but there is no art without the artists and makers doing the work.”

The National Campaign for the Arts (NCFA) is a volunteer-led, grassroots movement that makes the case for the Arts in Ireland. Formed in 2009, it seeks to ensure that the arts are on local and national government agendas and are recognised as a vital part of contemporary Irish life.