Megg Nicol and Alan Rickett explain how a musical has helped raise awareness of the importance of trees among London primary school pupils. 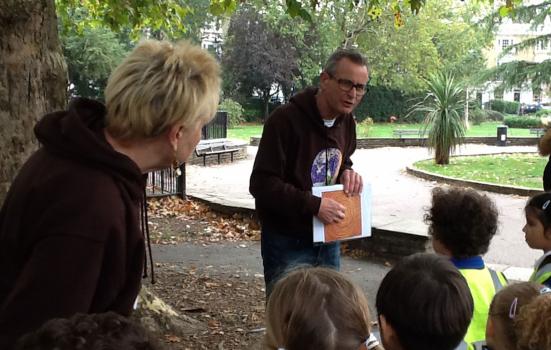 LFT Productions was formed in Islington in north London after we discovered that the borough had been declared an air quality management area, with concentrations of nitrogen dioxide and particulate matter (PM10) exceeding air quality standards.

If we can deepen the emotional connection children have with trees, we can go on to inspire the wider values of preserving our woodlands for future generations

Wanted to take practical action, we set up the Little Fir Tree project with the aim of countering air pollution by raising awareness and supporting The Woodland Trust’s tree initiatives in our local primary schools.

From our theatrical background, we understood that inspiring future generations to care for the planet would not be done through preaching to them. Rather, it’s about finding a way to connect that we all can relate to. So we came up with the idea of using a musical Megg had written with David Stoll called The Little Fir Tree - a re-imagining of the original story by Hans Christian Andersen - as a vehicle for getting the green message out there.

For some children who are brought up in an urban environment, the first tree they are likely to have any emotional connection with is the one that comes into their home or school at Christmas. And this is where the Little Fir Tree played its part.

In the musical, the little fir tree is a tiny tree trying to survive in a great forest in difficult circumstances. Not only is he bullied for being small, his life is threatened with the possibility of being cut short. The audience is reminded of the value of preserving our woodland areas and at the end of the story the little tree is not chopped down and disposed of (as in the original), but dug up and replanted as a symbol of growth.

The plan was to build an emotional connection with the little fir tree by using his story in two main activities. One would be a tree awareness workshop offered free of charge to primary schoolchildren in Islington, and the second a concert performance of the musical that the children would be invited to attend. We enlisted the support of The Woodland Trust that had tried to engage primary schools in the Camden and Islington area - but out of 60 schools, only eight had responded by joining its Green Tree Award Scheme.

A lack of funding means that schools often find it difficult to meet staff to child ratio levels for extracurricular activities. With this in mind, we took extra care in contacting schools directly, offering the tree awareness workshop in a local park for Years 3 and 4. This personal approach resulted in ten out of 30 schools booking the workshop. The children were also offered subsidised tickets to see the musical, and disadvantaged children were offered free tickets.

We covered topics such as identifying and describing the functions of different parts of trees, what trees actually need to grow, and the important issue of how trees help to counter pollution. (Incidentally, this fitted well with the Year 3 science curriculum.)

After spending an hour in the park learning how trees clean our air and help us breathe more easily, the children went on a nature trail to find things for themselves. They then headed inside for a hot chocolate, a preview of the music from Little Fir Tree, and to ask more questions about trees.

What has been surprising to us is that the project engaged many more people in the community than we were expecting. The local Buddhist centre volunteered to host the children for hot chocolate and the indoor part of the workshop, while councillors and officers from various departments in Islington were keen to promote it.

It was our hope that by offering an outdoor nature and environmental learning experience, a musical and a tree planting session if the schools took up The Woodland Trust’s offer to send the schools special tree packs, the project would be a memorable experience for everyone involved.

At the show itself, The Woodland Trust had a festive display and gave every child a sapling tree to plant - and we are now getting feedback on where these trees are being planted.

We feel the project has the potential to be enjoyed by many children throughout the UK - particularly in cities where pollution levels continue to be a problem. If we can deepen the emotional connection children have with trees, we can go on to inspire the wider values of preserving our woodlands for future generations and open the door to the a magical world of trees - one that many children, especially those in an urban environment, might not even know exists.