Who is really winning? 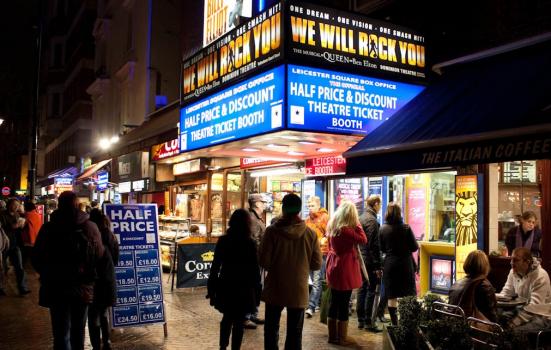 During a discussion about the revival of ‘Half a Sixpence’ at London’s Noel Coward Theatre in 2016 on the TheatreBoard website, someone said they wouldn’t see the show simply due to the high ticket prices, and couldn’t understand why they weren’t cheaper in order to build an audience.

Aside from the fact that a West End show is an expensive thing to stage (particularly on this scale, with a large cast and proportionately small theatre), my reply was that producers are rather stuck with their options. As I see it, they are simply as follows:

My point was that producers can’t really win these days.

In the past, the only people who knew which rows were at which prices were those who either had an obliging clerk on the phone, or could visit and see the colour-coded seating plan on the box office counter. Unless they ‘moved the rope’ (repriced seats nearest to where the prices usually changed to a lower or higher price), the seat prices were fixed and nobody knew any different. Plus, there was only the TKTS booth in Leicester Square to discount to.

A regular theatregoer knows the prices may change in their favour, but the casual buyer is repelled and will never come back to discover the alteration

Now it’s all open online, and the public thinks it can see prices and seat locations instantly, and knows how a show is selling. That’s not totally true though, as most theatres trickle seats through to the online booking plans to sell, and seats are often kept off for groups, agents and management use.

Still, I do wonder if dynamic pricing is actually killing shows in a whole new way now by offering chances to be too clever with the marketing of them – as my four alternative methods of pricing suggest.

Sure, dynamic pricing maximises the income potential for a hit show (with the corollary of high prices driving away regulars), and potentially allows extra seats to be filled at lower prices on quieter nights. But it also leads to the situation where prices seem to start particularly high to allow for later movement, but in the meantime blows the opportunity to sell to the less convinced at a reasonable price.

A regular theatregoer knows the prices may change in their favour, but the casual buyer is repelled and will never come back to discover the alteration. A Theatremonkey.com reader has just emailed to say she had decided not to see a show at her local theatre because dynamic pricing put second-price tickets up to above the usual top price on the day she wanted to go despite plenty of seats being available.

Worse, the vocal minority who love to issue gloomy warnings spot the empty seats, and are given fuel to talk a show into the ground, particularly when unsold tickets later show up at lower prices.

A loss of trust

There has to be something to be said for a return to the old methods. You knew the prices, knew the price structure would stay the same, and decided whether to buy or not without taking a chance that things would get cheaper later on. Producers had the flexibility to increase prices or quietly drop the price of seats within a section, and there was a sense of trust between both them and their customers.

Maybe that’s the key. Rebuild that trust and it’ll be a winning situation for producers whose shows run longer as the public begin to book ahead once again, which would keep more people employed for longer as well as reach a far wider audience. If they can afford to see a show at a time that suits them, it has to be good news for all.

It isn’t just the prices that need to be flexible to ensure a maximum return.

Who is really winning?