Inspired by theatres, Bristol’s museums and galleries decided to try out a ‘pay what you think’ model for exhibitions. Philip Walker tells the story. 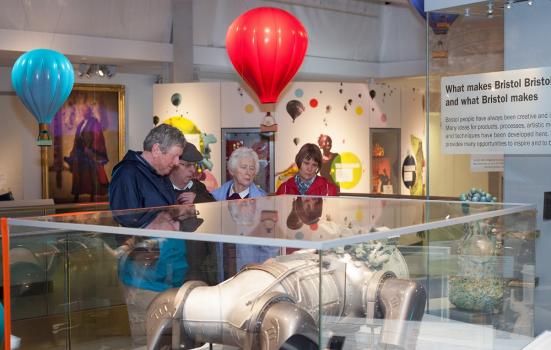 Up until 2012 exhibitions were free to enter at Bristol Museums, Galleries and Archives (now called Bristol Culture), as the public programme was considered a core part of the offer rather than an addition to the museum visit. However, reductions in funding created an imperative to increase revenue from new sources and to re-think the offer and purpose of the public programme. By re-positioning it as a vehicle for generating both income and audiences, the decision to charge visitors for exhibitions was taken.

The first charged-for exhibition opened in 2012 at M Shed, a newly developed city-history museum located on Bristol’s historic harbourside. This photography exhibition used a standard charging model of fixed-price entry, with concessions available at 20% less than the full-price ticket.

Payment is on average £3.50, for those that pay, but only about one in six visitors pay when we use the pay what you think model

It was deemed to be a success in that it generated income of over £25,000 and attracted more than 10,000 visitors. However, when we examined the conversion rate for museum visitors – the percentage of visitors to the museum that ‘converted’ to visiting the exhibition – we found it was a mere 6% compared with 58% to a similar but free photography exhibition by Martin Parr.

We then worked in partnership with the National Portrait Gallery to develop an exhibition of contemporary photography and historic portraiture entitled ‘Real and Imagined Lives’. The mistake we made was in replicating a fixed charge. At £5 to enter, the exhibition concept was too specialist or niche and too expensive for the majority of visitors to risk parting with this amount as a speculative payment.

This resulted in a very low conversion rate of 1.5% of general visitors paying to visit the exhibition. It also cost more for the staffing costs to have an additional member of staff selling tickets on the door.

We needed a better way of generating income and keeping visitor numbers up without incurring additional expenses.

Pay what you think model

Continuing with the partnership with the National Portrait Gallery, we agreed to host the more popular, tried and tested photographic portrait prize. Having seen a ‘pay what you think’ model used in theatres, particularly for new and untested shows, we were interested in looking at whether this model would translate into an exhibition context.

In order to prompt visitors to make payments we suggested specific amounts – £3, £5 or £10 – and linked these amounts to an equivalent recognisable consumer experience – a coffee, a box of chocolates or a cinema ticket. Boxes were placed beside each amount and we provided a leaflet for people to give their feedback and say why they had contributed that particular amount, to gain an insight into how people valued the exhibition.

The next and most successful implementation of pay what you think was for an exhibition about death, an in-house exhibition developed around a sensitive subject. The aim was to maximise audiences and achieve an ambitious income target. This time we concentrated on delivering a very clear message to all visitors at the point of entry through signage at the entrance to the gallery and in person by the invigilator inside.

Visitors were handed an envelope on arrival that reinforced the message that they were expected to contribute. It was evident that people were more likely to place notes rather than coins in the envelope and it resulted in an increased average contribution of £3.50 for those that paid anything and a strong conversion rate of 38%.

A clear message from the museum director helped to explain the reason for asking people to pay. There was a box for envelopes, a suggested payment of £5 as well as ‘text to pay’ options. All of the messaging and its reinforcing throughout the visit helped to increase the income. As a result, the exhibition generated an income of 60p per head and exceeded visitor number targets – over 60,000 visitors attended.

Payment is on average £3.50 for those that pay, but only about one in six visitors pay when we use the pay what you think model. Free exhibitions attract the highest conversion rate at 60%.

It is worth being aware that pay what you think is considered as a payment not a donation and therefore is subject to VAT and should be treated as taxable income and audited as such. Unlike a donation, it cannot be Gift Aided to provide additional tax benefits. Others may need to consider carefully whether using this model will work for them, depending on their organisational constitution and finances.

Charging a fixed price provides certainty around audiences and income, but it is our experience that the pay what you think charging model guarantees greater audience numbers and engagement. It creates less of a barrier to visitors, who are more likely to visit as the stakes are not so high and ultimately they can decide how much they want to pay based on their own values and frames of reference.