A bid for a cultural future

Coventry’s two universities are a crucial component of its bid for UK City of Culture 2021. Geoff Willcocks explains how they are working with the cultural sector. 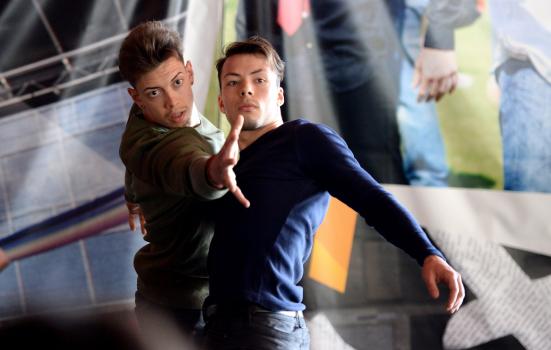 Marius Mates and Dimitar Goranov in TRAUM by Theatre Absolute

Coventry was once the capital of England. There was no Arts Council, no local enterprise partnerships and no combined authorities in those days. Now it sits as the fifteenth largest city in England with two award-winning universities and its iconic cathedral and modernist architecture.

We believe that a sustained and formalised partnership will build the city’s cultural capacity, stimulate the creative industries and access more funding routes for culture

As the origin of theatre in education (Belgrade Theatre), 2 Tone music and the pedestrianised shopping centre, Coventry is intent on making its mark again on a national stage as one of the UK’s most diverse creative modern cities.

A bid is born

When Hull won UK City of Culture in November 2013, a BBC news story planted the idea that Coventry should bid for 2021. The cultural sector, city council and universities spent a year looking into the idea. The bid was born but few had realised just how important this might be in joining up the city and giving a voice to its young people and diverse communities.

With just three Arts Council England National Portfolio Organisations, Coventry is under-resourced. Some cities would moan about regional imbalance, but Coventry is getting on with an ambitious plan to reposition its status as a cultural and tourism destination and to address, at a micro level, the findings of the national research by the Warwick Commission. Local developers, private-sector partners, cultural networks and community groups are all starting to work together as the city joins up its cultural offer.

So far, as a result of the Coventry 2021 bid, 94-year-old Indian photographer Masterji, who migrated to Coventry over 55 years ago and has documented Asian arrivals in the city for five decades, has featured on BBC worldwide. And learning-disabled actor Rishard Smith was given a stage in the seven-hour Coventry 2021 launch programme of local talent at the Godiva Festival.

The city has commissioned a ten-year cultural strategy. Backed up by extensive research, it will look decidedly different. A website, film, blogs and a bank of ongoing research underpin the emerging plans, and hours of visioning and consultation will produce a strategy that is rooted in Coventry.

The team for the strategy managed by Warwick University’s Jonathan Neelands includes myself, Vishalakshi Roy and Andrew Dixon, whose reputation for transformation in NewcastleGateshead and Hull led to him being appointed the first visiting professor of both Coventry and Warwick Universities. Laura McMillan, the locally based manager of the Coventry 2021 bid, is part of a young team driving the culture bid with secondments from both universities. It is also significant that Coventry City Council has just appointed a new arts partnership manager, Clare Mitchell.

The strategy sees City of Culture as a prototype vehicle to drive the ambitions of a new partnership within the city. We believe that a sustained and formalised partnership will build the city’s cultural capacity, stimulate the creative industries and open up access to more funding routes for culture.

The partnership between the city’s two universities is a crucial component. Very different institutions offering different student experiences and research strengths, they bring complementary skills, resources, knowledge and expertise to everything from community engagement to programming and economic analysis of the cultural economy.

A new approach to placemaking

The 2021 process is providing a platform for Coventry’s talent to emerge and for the city to reinvent itself. A city that has been moving people through its design and manufacture of the bicycle, car and jet engine is now moving people through culture. It is a narrative that recognises the city’s past, both its glories and its troubles, but more importantly, it is a narrative that looks forward to the future.

Both universities are helping to build capacity in the cultural sector and mentor the next generation of producers, programmers and creative artists in order to generate a robust, home-grown cultural infrastructure within the city.

Clearly, the collaboration between the universities is only part of the overall picture in respect of the city’s new approach to placemaking. The city’s bid to the Great Place Scheme demonstrates that cultural aspirations are shared and supported by the widest possible coalition of partners from heritage groups to local sponsors.

It is the dynamic partnership between such previously diverse groups and organisations as Coventry Cathedral, the Ricoh Arena, Culture Coventry, the Chamber of Commerce, the Historic Coventry Trust, as well as the two universities, that gives the city’s plans for growth realistic sustainability.

As David Burbidge, Chair of the Coventry City of Culture Trust, notes: “The contribution that the joint partnership of our two universities makes to our work is invaluable. Their respective understanding of the city, its people and organisations and their links and connections, both national and international, across the arts, politics and business, make them incredibly valuable partners.”

The benefits of this collaborative partnership have a payback for the universities too with increased opportunities for research, local graduate employment prospects and a chance to make the city a more attractive proposition for prospective students, staff and new creative businesses.

A bid for a cultural future