A 100-metre high public artwork isn’t always the answer. Peter McCaughey reflects on why he took a more dispersed approach to an art strategy for a housing project in inner Glasgow. 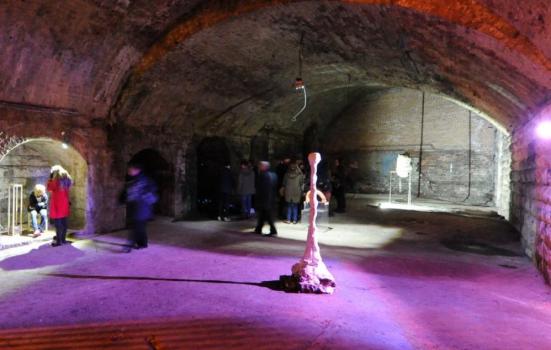 In the past six months WAVEparticle has picked up three awards in Scotland: the SURF Creative regeneration award, the Arts & Business Scotland Placemaking award (with Urban Union) both for our work in Laurieston, and most recently the Scottish Civic Design awards for Urban Realm (Helensburgh) with Austin Smith-Lord.

Relationships have been everything and if ever a process was owned by a whole network of individuals and organisations, this is it

On the basis that we must be doing something right, I’m pausing to reflect on Laurieston, on how we got to do what we do, and what might be useful and encouraging to other artists interested in addressing the opportunities and challenges in working in the public realm in this way.

Three years ago we tendered to make an art strategy that would guide the disbursement of monies that were to be levied as part of the tendering agreement between a contractor, Urban Union, Glasgow City Council and the New Gorbals Housing Association (NGHA).

The focus was a new build project that would see the construction of 800 homes in an inner city area of Laurieston rendered blank through demolition. The budget under a community benefits clause was in the region of £400,000 for a process that would last at least ten years and see over 2,000 people move into the area.

We inherited a master plan with an architect drawing that visualised a 100-metre high public artwork, very like the Spire in Dublin. We worked within the community for six months and presented our art strategy.

It didn’t propose a big, shiny million pound spike. Instead, we proposed 20 ideas as opportunities and these were embraced by all involved, including the board of the contractors, who quite liked the big spiky thing, but also understood the attraction of a diverse, dispersed strategy focused as much on ambiences and temporary events as on more permanent changes to the area. The strategy was launched and we were then appointed as caretakers to Art and Living: Laurieston.

The awards we have picked up all noted the level of partnership in our process, with Arts & Business Scotland particularly recognising the collaboration with Urban Union.

More and more I believe that successful placemaking is not just about bricks and mortar, projects and buildings, but about mapping and strengthening connections between people, community groups and cultural organisations based in an area.

I have a commitment to the idea of the artist as an in-betweener, an interpolator, translator and mediator in relationships between professional organisations, individuals and groups within communities and other artists. Often ideas and opportunities emerge from the site between things, the gaps that result from increased specialisation.

Three of the opportunities we identified for Laurieston were based upon reactivating gap sites. We grouped them under the banner of open spaces and they include a derelict roofless church, the rubble-strewn footprint of a demolished tower block and 23 empty railway arches that curve around the edge of Laurieston.

Working closely with Urban Union, NGHA and Glasgow City Council, Network Rail and local arts organisations we opened all these spaces to the local community and artists and art students from across the country and beyond. We hosted events, performances, exhibitions and film screenings.

We established a simple premise of anti-curatorship in that we say yes to everyone who approaches us. We have so many spaces this has become possible. In three years we have seen over 60 exhibitions, performances, winter warmers and ceilidhs attended by over 20,000 people.

We were lucky to have the renowned Citizens Theatre on our doorstep. We developed a fantastic mutual support society where we worked together to deliver promenade theatrical performances with local community groups across these sites.

For every £1 spent we have raised £2, hustling for sponsorship in kind and picking up small awards as we go, including support from Glasgow City Council’s Stalled Spaces initiative and from its Vacant and Derelict Land Fund, which helped us develop these three gap sites.

Relationships have been everything and if ever a process was owned by a whole network of individuals and organisations, this is it. We have been very lucky with support from key folk in the council and from the highly committed staff of NGHA, from a couple of fantastic managers in Network Rail, from the team in Urban Union, and our friends at the Citizens Theatre, The Barn, the Gorbals art project and the local community, schools, organisations, individuals and artists who have made wonderful things to see.

It’s great to be able to say that under the direction of NGHA, Urban Union in the first three years has built some of the best social housing seen in Scotland and have won a series of accolades for doing so.

Of all the things we have done in the area, if I was to pick a favourite it would be a photography show we hosted by Andy Gallagher. Andy is an NGHA tenant and, like a large percentage of its tenants, is unemployed. Andy has some mental health issues, which he is keen to talk about and photography is an anchor for him.

We kept seeing Andy taking photographs at community events, and so we asked about his photography. It turned out that while he had been making images for over 25 years he had never had an exhibition of his work.

‘Life through a Lens’ was his show of 40 prints, seen by over 400 people who loved his work and bought his photographs. At the start we interviewed Andy and he admitted he didn’t think of himself as a photographer. At the end we asked him again and, on camera, he says: “I’m a photographer”.

A note of caution to finish: ‘regeneration’ is a dangerous word. So easy to say, but so very difficult to meaningfully achieve. I don’t tend to call our work regeneration. Andy would love to earn a living as a photographer and we’d love to support him to do so, but we are at the edge of our experience and capacity. I sometimes think making a job for a person, a really meaningful job, is about as hard and as expensive and as time-consuming as building a house.