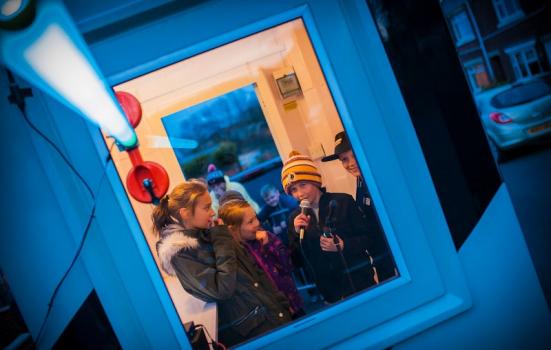 In March this year 33 residents in a neighbourhood in Horden, East Durham hosted a mesh network to create VoiceOver, a chain of interactive light and sound that everyone could hear, and whose luminous path linked the residents together.

The inspiration came from Hands Across America, a participatory project back in 1986 which invited people to connect by holding hands for 15 minutes to form a human chain across the US.

This project helped local residents get involved, find an excuse to talk to the people living in the same street and connect with them

VoiceOver was produced by Forma Arts and Media as part of East Durham Creates, a Creative People and Places project, which focus on areas where involvement in the arts is significantly below the national average.

The project responded to some of the problems facing East Durham, an area that comprises a number of former mining villages in semi-rural settings and two towns, Peterlee and Seaham, with a total population of 94,000. The area has experienced social and economic deprivation exacerbated by pit closures, although some green shoots of recovery are starting to appear.

Public transport links are generally poor and car ownership levels remain below the national average. The locality continues to face challenges across health, education, employment and household income. Following many years of investment in regeneration and the reclamation of the coastline, a new generation of communities is slowly rediscovering an identity that is not entirely bound up in its mining past.

There is a real opportunity to explore what arts and creativity have to offer this overlooked and underappreciated part of England. The East Durham Creates programme aims to help address some of these local issues through the arts.

VoiceOver was designed and deployed by Umbrellium, a London design collective which designs and builds technological tools, in collaboration with local residents and organisations over many months. Over 200 people were involved in design activities, decision-making and setting the project goals.

When we approached Umbrellium two years ago, we invited them to get large groups of people involved in a public urban spectacle. We knew that such works can be the first step towards longer-term, meaningful participation.

The residents of Horden were encouraged to become hosts and by the launch date 33 houses were recruited as hosts, which required them to have a light antenna on their homes and a radio box inside, these lit up and broadcast live as voices passed through and round the streets. Over 300 local residents used the platform to talk, sing and perform poetry. They also communicated messages such as ‘Happy Birthday’ and ‘Happy Anniversary’ and used the line to talk to VoiceOver hosts.

Working with fewer people to achieve deeper impact, this project helped local residents get involved and find an excuse to talk to the people living in the same street and connect with them. It even brought together three cousins who didn’t know they were living in close proximity.

According to futurist Paul Saffo: “Media innovations drive economic shifts and we invent new technology and then use it to reinvent ourselves.” By supporting artists to explore emerging artistic and technological research likely to be culturally significant in the future, we explore the possibilities of technology as an art medium and for social and economic change.

VoiceOver used new technology to build a better neighbourhood and deployment at the hyper local level. It also changed the outlook of some of those who view art as separate from the general culture.

Rather than simply being an efficient communication tool (a phone would have been better for one-on-one conversations, and Telegram more private), the aim was to get as many people as possible together at the same time communicating with others they might not even know.

They were meaningfully involved in creating, installing, supporting and bringing to life a cultural infrastructure, one that actively encourages performance, sharing and storytelling.

Through commissioning ambitious technology projects like VoiceOver to address various economic and social challenges, we can drive innovation in services and rethink contemporary art theory.