Daycare centres may not be grand venues, but that doesn’t mean art events staged in them should not be ambitious, says Paul Clark. 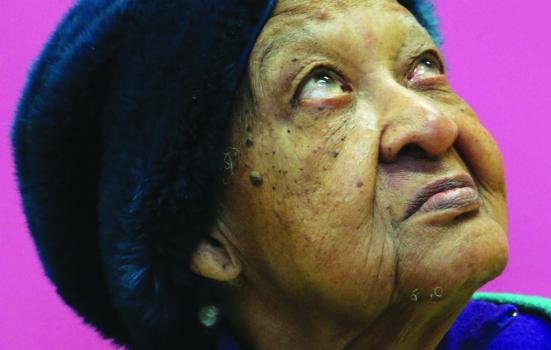 Artwork for a vinyl remix of favourite tunes
Photo:

I created Clod Ensemble back in 1995 with director Suzy Willson to make an adaptation of Pushkin’s ‘The feast during the plague’. Since then our work has cut across different artistic genres. We’ve been to all kinds of festivals and made work in theatres, art galleries and other spaces both indoors and outside. The scale of our shows varies enormously too, from one woman shows (The Red Chair) to large-scale pieces at Sadler’s Wells and Tate Modern’s Turbine Hall.

A set of core principles binds all our projects: ambition, high production values and working with excellent artists. We called our project for the elderly ‘Extravagant Acts for Mature People’, with the word ‘extravagant’ used as an inspiration to both programmers and elderly participants. Simply because resources are tight, and the venues (daycare centres) are not as grand or luxurious as the Royal Opera House or the National Theatre, does not mean that the artistic content need not be ambitious.

“This is one of the happiest parts of my life … It’s made me feel alive and I look forward to every Friday. If only it could last”

Thirteen years ago we shared a building with a daycare centre in Islington in London and began to work with the elderly, many of whom had no access to the arts whatsoever due to mobility or financial limitations. After experimenting with various participatory workshop formats, we eventually began putting on informal lunchtime concerts and invited musicians who were already in our network. Some of these events were indeed extravagant – we once hosted the full London Bulgarian Choir.

Soon we began to respect the rituals of performance (sitting in rows, providing a programme, putting in lights and a backdrop) and realised that we had underestimated the value for this audience of simply being able to see a high-quality concert. Many of the visitors to the centre rarely went anywhere else and were seldom offered a special event, a treat, that the whole group could take part in.

The programme is developed in collaboration with the elders, but we do take risks and book acts they may never have come across (and certainly wouldn’t have asked for), such as opera singer Lucy Stevens, poet John Hegley and avant-skiffle band The Severed Limb. On two occasions we held large-scale intergenerational swing nights, complete with an 18-piece big band, food, drink and dancing. As one daycare centre member put it at the end of an exhilarating night: “We’ve all got a spring in our step now. Look at us!”

Some of our aims for the concerts can be pretty intangible – beauty, celebration, having ‘a spring in your step’ – while others are clearer such as the physical benefits of clapping, singing, tapping your feet and sometimes dancing, or the camaraderie provoked by a shared experience and the pleasure in watching and talking to talented young artists. Queenie, aged 92, attended the Swinging Belles concert at the Millman Street Resource Centre: “It was so different, I was there. I kept thinking I must get that 10 o’clock bus home.” The songs had made her feel like a young girl again out at a dance and not wanting to miss the last bus home.

Alongside the concerts, we run an annual programme of workshops with a guest artist making weekly visits over two or three months. Artists from different disciplines work with small groups and their activities have been hugely diverse – we have published photographic books and held exhibitions, created a ceramic work, a set of handmade greetings cards, created dance sequences, as well as several films. Most recently, Phoebe Davies finished a project at two centres that featured among other things a 12-inch vinyl remix of favourite tunes by local DJs. With these projects the aims change with each artist. It can be about challenging the participants to stretch themselves physically and mentally, or it might be keeping their imaginations supple, encountering something new or learning a new skill, or working as a group and creating a sense of continuity.

Oswald, who also attends the Millman Street Centre, said: “This is one of the happiest parts of my life, since I’ve been part of this photographic project. It’s made me feel alive and I look forward to every Friday. If only it could last.”

Reflecting on Extravagant Acts now, I’m aware of how the intensity and meaning of participation varies from person to person and from situation to situation. Some people are more hands-on than others and we want to offer something for those who are unable or not willing to participate in more interactive work. I also reflect on a rather obvious point about the performing arts – that to be in an audience is not necessarily a passive thing. It can be a visceral and vital experience. A live audience is almost always a participant in the work in a very tangible way. How people react fundamentally affects how the event comes off, perhaps in an even more heightened way in the intimate surroundings of a daycare centre.

When music is no longer the afterthought
Extravagant acts